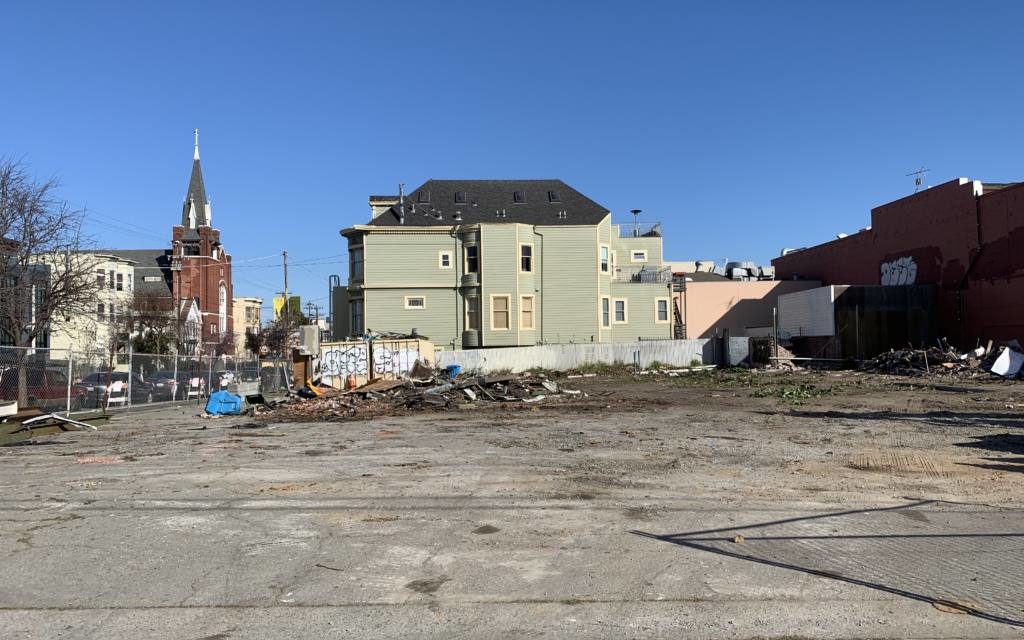 The gas station at 799 South Van Ness is no more. Photo by Julian Mark

A gas station that has sat unused and derelict on the corner of 19th and South Van Ness for some 16 years has been razed. Next, a seven-story, 75-unit building will rise up in its place under the guidance of developer Joe Toboni.

“We’re just getting the site ready,” said Toboni, who initially proposed the project some five years ago. “We’re doing demolition and going to assess the site.”

He said construction will likely begin in earnest in the next 60 days.

“It’s great,” Toboni said about getting started. “In all these things you start out very energetic and ready to build right away, and as time goes on, we have a lot of different things happen and the market changes.”

He said he expects the building to be completed within 18 to 20 months after construction begins. But on the phone, Toboni seemed more excited to talk about his affordable housing plan. The project includes a slim 11 below-market-rate units (14.7 percent). But the developer said he’s hoping to get those units filled quickly — and use the money on more below-market-rate units.

“We hope to raise $10 million by selling all BMRs and build in the neighborhood of 50 to 100 units with that money,” he said, noting that he has 11 to 15 more units approved or in the pipeline, which he also expects to generate revenue.

This will be done through the nonprofit development business he’s creating with his son, Joey, aimed at affordable housing construction. Developers usually build on- or off-site affordable units by city mandate — or pay a so-called “in-lieu” fee to a city fund. But, to the best of Toboni’s knowledge, developers have not used revenue from affordable units to fund more affordable units. “We’re forming the board as we speak,” Toboni said. He, his son and wife Mary will head the board “along with a few developers, community and civic leaders,” Toboni said.

Toboni said he’s hoping to get that $10 million matched, and his son has already met with some tech companies to do that (he would only say they were among some of the largest in the area). The prospect of tech companies getting involved “is not just a wish,” Toboni emphasized. “They’re all excited about it and wanting to do something.”

He said he’s currently eyeing five sites, which he could not specify because they were still “in play.”

Toboni said he hopes other developers will begin to “join the cause” and sign onto his model for private affordable housing construction. That way, he said, “it could be 1,000 units and then 2,000 units, and then it really is giving back.”

As Mission Local has previously reported, Toboni, a city native, once lived in the Mission — and began his development career building a 42-unit section 8 project in the Excelsior at 4770 Mission St.

His development company, the Toboni Group, which he runs with his son, completed a 27-unit market-rate project at 600 South Van Ness in 2017. The project under construction at 19th and South Van Ness was approved by the Planning Commission in December 2017. In addition to housing, it will also include around 4,500 square feet of retail space and 41 parking spaces. The site of the former gas station at the corner of 19th and South Van Ness. Photo: Joe Rivano Barros / Mission Local.