Board of Supervisors unanimously adopt resolution to #BringOumarHome 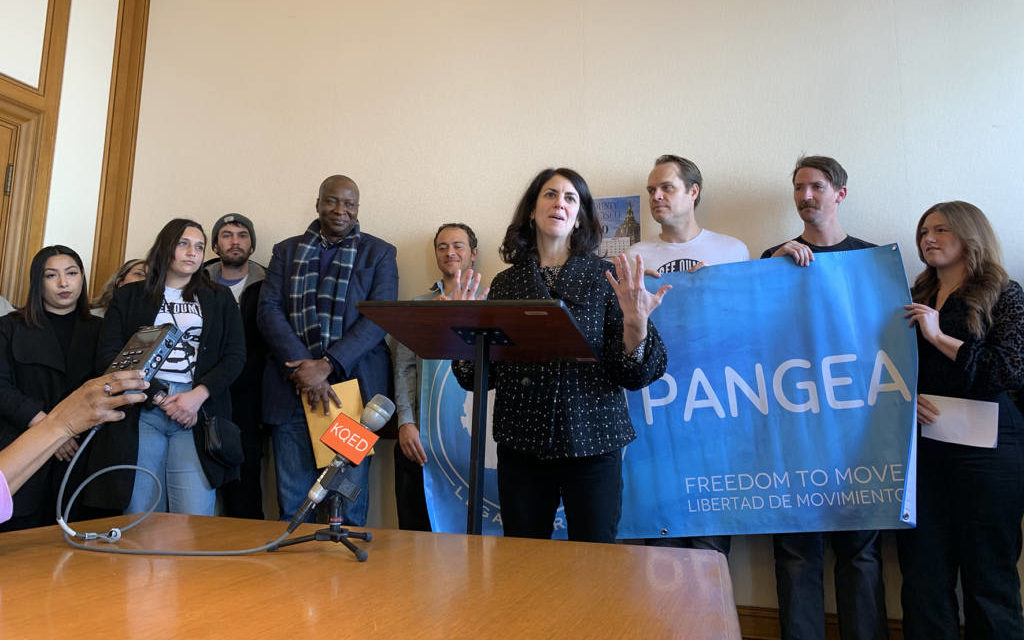 The San Francisco Board of Supervisors unanimously adopted a resolution “urging the U.S. Department of Homeland Security, U.S. Senators Dianne Feinstein and Kamala Harris,” and other agencies to return Oumar Yaide to San Francisco.

Yaide, a Chadian national and a Mission District resident, was deported in December while an appeal to reopen his earlier case was still in process.

Since 2009, Yaide had been seeking asylum in the United States “based on ethnicity and imputed political opinion,” according to court records.

His asylum petitions were denied after the Board of Immigration Appeals and the Ninth U.S. Circuit Court of Appeals in San Francisco found that there was “no compelling evidence” that either he or his ethnic group is “specifically targeted” in Chad, according to the December 2018 court memorandum denying Yaide’s petition.

Yaide filed a motion to reopen his asylum applications last year after coming out as gay arguing that he feared persecution if he’s returned to his native country.

The country of Chad started criminalizing same-sex relations in 2017. According to court records, “Yaide fears that if he remains in Chad he will be tortured and killed by his own family, clan, or the government.”

No decision on that appeal was made because the Immigration and Customs Enforcement or ICE arrested Yaide at his Mission District apartment right after Thanksgiving in November 2019.

“While Yaide’s motion to reopen was pending before the immigration court,” he was already being brought to the airport for deportation, stated in court records. Pangea Legal Services filed an instant habeas petition and a judge issued an emergency temporary restraining order to stop Yaide’s deportation. But Yaide was already in the air—in handcuffs and accompanied by two ICE agents—on his way back to Chad.

In mid-December, United States District Judge Charles Breyer issued an order directing the Department of Homeland Security to bring Yaide back to the United States.

“Yaide has a constitutional right to procedural due process,” Judge Breyer stated. “He also enjoys a statutory right to file a motion to reopen his removal proceedings.”

Yaide’s friends and chosen family have been at the forefront of Yaide’s fight. On Tuesday, they held a press conference at the San Francisco City Hall ahead of the Board of Supervisors’s weekly meeting.

“The intersections of Oumar’s being Muslim, black, queer, and undocumented have led to his high criminalization and in turn led to his unfair deportation,” said Nakia Woods, an organizer for Black Alliance for Just Immigration. “U.S. government knew that Oumar’s life will be in constant danger due to his sexuality and still chose to send him to a country that will persecute him for being a queer person.”

Added Alan Pelaez, an organizer for The Black LGBTQIA+ Migrant Project, “This proves that San Francisco Bay Area is not capable of protecting us.” Pelaez said the deportation created fear in the immigrant community..

“Oumar is my constituent,” said District 9 Supervisor Hillary Ronen. “He was a resident of the Mission District where he contributed deeply to the community through his volunteer work with local organizations.”

On January 28, Ronen introduced the resolution “urging the U.S. Department of Homeland Security, U.S. Senators Dianne Feinstein and Kamala Harris, and all interested federal agencies to ensure Oumar Yaide’s safe return to San Francisco to reunite with his chosen family.”

“The stakes here are extremely high,” she said. “Because every additional day that Oumar spends in Chad, he faces even greater risk being jailed, facing violence or even worse.”

“If Yaide is imprisoned or killed in Chad, the Government will have denied him any chance to have his motion to reopen adjudicated,” Judge Breyer wrote in his ruling.

“This resolution affirms San Francisco’s unwavering support from holding our nation’s asylum protections and holding the Trump administration accountable to its legal and moral obligations to refugees, like Oumar,” Ronen said.

Judge Breyer ordered the government to facilitate Yaide’s “prompt return” to the United States  by early January. The Department of Homeland Security has yet to comply with the court order.

A status conference is set for Friday, February 7, at 10 a.m. in San Francisco, Courtroom 06, 17th Floor, before Judge Breyer.