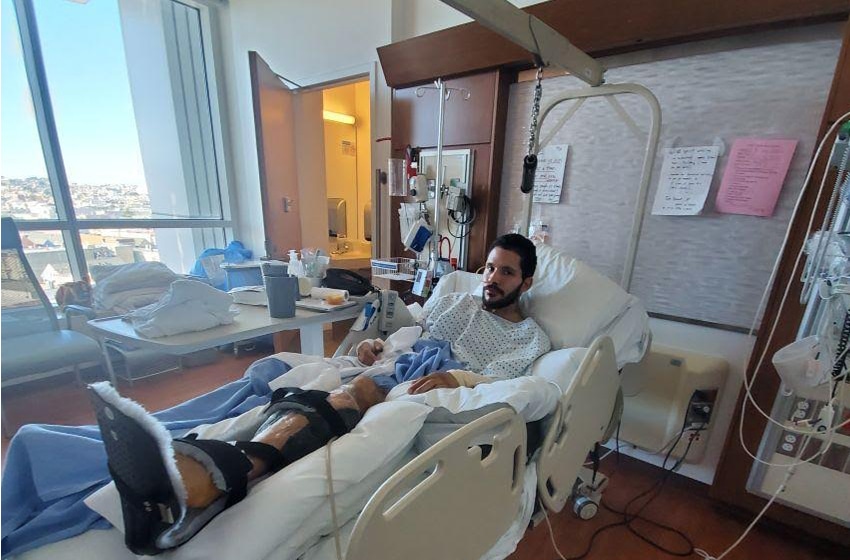 Jamaica Hampton, the 24-year-old man who police shot multiple times in December at the intersection of Mission and 23rd streets, had his left leg amputated on Thursday — a medical necessity after officers shot him at least once in the leg during that incident, according to Hampton and his friend Eve Greenberg.

Greenberg, who has been in regular contact with Hampton since the Dec. 7 shooting, said that one officer shot Hampton at least once in the left leg as Hampton ran in the direction of the officer. The officer’s other shot may have hit Hampton elsewhere. Hampton granted her permission to share these details.

Once on the ground — and seemingly posing no further threat — another officer shot Hampton in the left arm, according to Greenberg.

On Dec. 7, around 8:30 a.m., police stopped Hampton in front of a corner store at 23rd and Mission streets. Police allege Hampton immediately moved to attack Officer Sterling Hayes as he opened the door of the patrol car, and then assaulted another officer, Christopher Flores, with an 8-½ inch Grey Goose vodka bottle, injuring Flores.

A chase around 23rd Street ensued. As Hampton ran in the direction of Hayes, the officer fired multiple times and struck Hampton, video of the incident shows.

Hampton fell on the ground, but as he was crawling in the direction of Flores, Flores fired one shot, according to video footage of the incident. That shot apparently struck Hampton on the arm.

According to Hayes’s body camera, viewed by the public at a town hall meeting, Hayes told Flores, a rookie, to “Stop! Stop! Stop! Stop!” after Flores shot Hampton while he was on the ground.

Police later confirmed that Flores was undergoing his first-year field training at the time of the shooting, and Hayes was his training officer.

Greenberg said she made her weekly visit to Hampton on Monday. That’s when she learned Hampton would be having his left leg amputated. On Friday, Hampton confirmed to her that doctors amputated his left leg after a five-hour surgery on Thursday.

Greenberg met Hampton six months before the shooting when he was working security at the Farmer’s Market in Oakland.

“He’s doing good and his spirits are up — but it’s a long road to recovery,” Greenberg told Mission Local on Friday, noting she has put up a GoFundMe for his recovery. “He just wants to get out of the hospital. He told me ‘I just want to get out of this bed.’”

She said Hampton wants to get back to his life of helping foster youth. “But now things may be looking a little different because healing from surgery is his number-one priority,” she said.

Hampton struggled with homelessness through much of childhood, sometimes living in drug houses and becoming a foster child at the age of 12, Hampton said in a recent video by CityTeam, an organization that offers social and addiction recovery services. He was living and working at the CityTeam building on 8th and Washington in Oakland around the time of the shooting, Greenberg told Mission Local in December.

San Francisco Police Department officials said, on Dec. 7, officers had been searching for a suspect that morning who had burglarized a house on 23rd and Capp streets and who was breaking into cars near the house — but none of the charges filed against Hampton relate to either incident.

Hampton’s vandalism charge relates to an unspecified incident on Mission Street between 22nd and 23rd, according to police.