Chesa Boudin is sworn in as San Francisco’s District Attorney. Now he must navigate ‘the promised land.’ 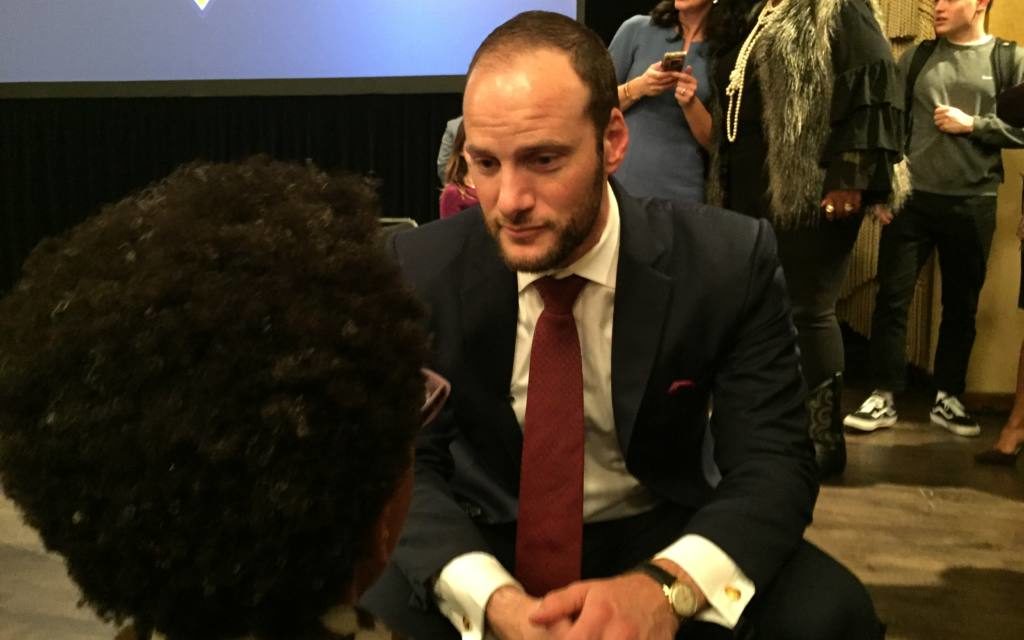 Chesa Boudin, a former deputy public defender whose life story of having to visit his parents in prison for much of his life made him a criminal justice reform icon, was sworn in as San Francisco’s District Attorney Wednesday night. His message is one of radical change of the city’s criminal justice system — and cooperation with the city’s establishment to make those changes.

Throngs of supporters and public officials packed into Herbst Theater, giving Boudin an energetic standing ovation after he raised his right hand and repeated the oath that Mayor London Breed read to him. The smell of burning palo santo wood hung in the air, as one knowledgeable observer called the scene, the excitement — the notably large number of deputy public defenders in the room — the “promised land.”

“Join me, join this movement — join us — in rejecting the notion that, to be free, we must cage others,” Boudin said.

Boudin’s vision will, indeed, face major tests, starting from nearly Day One. To wit, Boudin — who promised greater police accountability during his campaign — will only have a scant month to decide whether to criminally charge San Francisco Police officers involved in the shooting of a schizophrenic man on the man’s own porch in 2017, per an order from a federal judge.

Likewise, Boudin in October told the family of Jesus Delgado Duarte, whom 10 police officers shot and killed in the Mission after Duarte fired a gun at them, that “Your family gets justice the day I take office.”

Emily Lee, the director of San Francisco Rising, which helped organize for Boudin during his campaign, said the families of police shooting victims Alex Nieto and Mario Woods endorsed Boudin after he promised greater police accountability and “to end police brutality.” She said those are the families “we’re holding this promise for.”

“Winning is hard — governing is harder,” Lee said, adding that Boudin was “put in [the DA’s] office by a movement — and he is now accountable to that movement.”

His supporters were nonetheless optimistic he would succeed. Supervisor Hillary Ronen, whom Boudin cited as the “very first elected official to support my campaign,” gave Boudin some advice.

“They will try to undermine your ideas in any way that they can — and they will attack you in brutal ways,” she said. “But they will only have the power to succeed if we let them — and we will not let them.”

With his swearing-in, the 39-year-old Boudin joins a wave of “progressive prosecutors” in cities across the country who have sought to reform the criminal justice system from within — instead of pushing old-school tough-on-crime philosophies. Their lives have not been easy: That list includes Philadelphia District Attorney Larry Krasner, a former civil rights lawyer and defense attorney, who has experienced extreme political pushback for his reformist policies after being elected in 2017.

Boudin appears to want to avoid similar resistance. He told reporters before the ceremony that he had a “really productive lunch” with San Francisco Police Chief Bill Scott and a “two-hour meeting” with other SFPD high-ups. He also had a “productive conversation” with Tony Montoya, the president of the San Francisco Police Officers Association, the police union that directed some  $700,000 toward video ads attacking Boudin during the campaign (which led, in part, to Boudin’s supporters chanting “Fuck the POA” at his election night party.)

“I know we’re gonna have our differences,” Boudin said. “But I’m confident that the common ground will be more important — and we’ll grow it every single day if we work together.”

Boudin also chose Mayor Breed to swear him in, a move that some observers saw as an act of “peacemaking” after Breed installed Boudin’s main opponent, Suzy Loftus, as Interim District Attorney just weeks before the election. Breed’s move was precipitated by then-DA George Gascon prematurely departing to campaign to be elected as Los Angeles District Attorney.

Throughout the inauguration ceremony, Boudin referred back to his early life of visiting his parents, who were imprisoned for their involvement in a 1981 armored truck heist that resulted in the deaths of two police officers and a security guard. Prison visiting rooms were some of his earliest memories, he has said — and those experiences scarred him, causing him to fall behind in school and have behavioral issues.

“This is not a day I could have imagined for myself as a child,” Boudin told his audience.

Boudin addressed his parents directly. His mother, Kathy Boudin, was in the audience. His father, David Gilbert, is still in “a cage in a prison thousands of miles away,” Boudin said.

“You taught me that we are all more than our worst mistakes,” Boudin told them in his address. “That taking responsibility for our lowest moments requires dignity and courage — that familial bonds can be stronger than steel gates.”