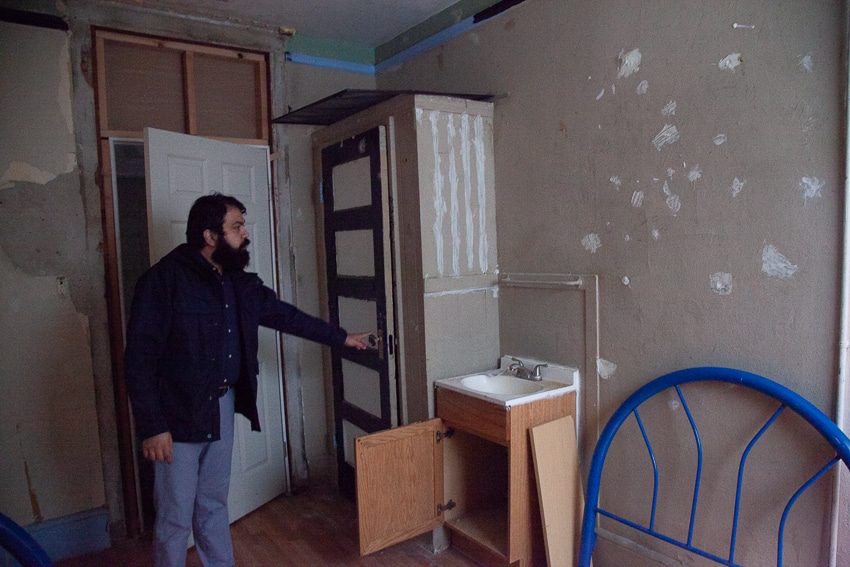 Juan Garcia, an organizer with the Mission SRO Collaborative, explores a run-down room at 1312 Utah St. Photo by Abraham Rodriguez.

On a rainy Wednesday evening, some two dozen activists showed their support for tenants facing evictions at a Mission single-room-occupancy hotel in a novel manner: They sang Christmas carols.

The caroling came as many tenants at 1312 Utah St., near Zuckerberg San Francisco General Hospital, are facing renewed efforts by the hotel’s owners to evict them. The tenants also say that living conditions in the hotel — which have long been substandard — are worsening, as crews have torn up walls and ceilings and left them in a state of semi-repair.

Mission Local has reported before on the troubled hotel on Utah Street, called “The Pit” by city employees. This crumbling 1911 structure features a convoluted history of ownership changes; city officials last year were baffled that Paul Pelosi, Jr. — the son of the Speaker of the House — was dropping by the Department of Building Inspection and describing himself as the point man for the building’s ownership (“Oh shit,” a DBI worker told Mission Local in 2018. “It’s really him.”).

Several tenants have died in the hotel due to drug overdoses; building inspectors have filed enough code violations here and found that so little progress has been made addressing them that, in May, we reported that the Department of Building Inspection referred the case to the city attorney for “litigation.”

While the hotel’s ownership structure remains murky, all of the residents say that Georgina Rodriguez Ramirez, a prior owner of the hotel, is still involved in day-to-day matters (she denies this).

As the city maintains a sharper eye on this building’s ever-shifting ownership, living conditions here have not improved. If anything, they’ve worsened. When a Mission Local reporter this week walked through the building, he observed that half of the rooms are abandoned and in disarray, with some tenants using them as storage. Holes in the walls have been clumsily patched with sealants and Bondo, and attempts to replace and repaint walls have been left half-finished. Despite now having two functioning toilets and showers, the hotel still has a dry, musty smell. The trash, once overflowing, is mostly gone; the fetid carpets have been replaced with mismatched tiles.

At some point, crews were hired to put up an extra layer of sheetrock to cover up the old walls in a quixotic attempt to make the hotel look newer. The sheetrock is exposed and unpainted; in some places, holes have been cut into it to accommodate fire alarms and non-functioning cameras.

The level of neglect is so severe, residents say, that a sick tenant suffering in squalid conditions nearly died here last week.

Jovita Jimenez, a tenant of four years, said that she discovered her elderly neighbor suffering in a pool of his own blood and feces. She said that she regularly checks up on the man, and would help him get in and out of bed. When she hadn’t seen him for two days, she knocked on his door and opened it when he didn’t respond.

The man had blood coming out of his mouth, and his colostomy bag had burst all over his mattress. Her neighbor had lain there, near death, for almost two days until Jimenez called an ambulance. It drove him 200 yards to General Hospital, where he remains.

The man’s condition was likely worsened by a colony of rats infesting his apartment. They deposited feces throughout his apartment and were making use of wood shavings to build what appeared to be a nest in the middle of the apartment. The wretched smell in this room left this reporter feeling sickened for hours. 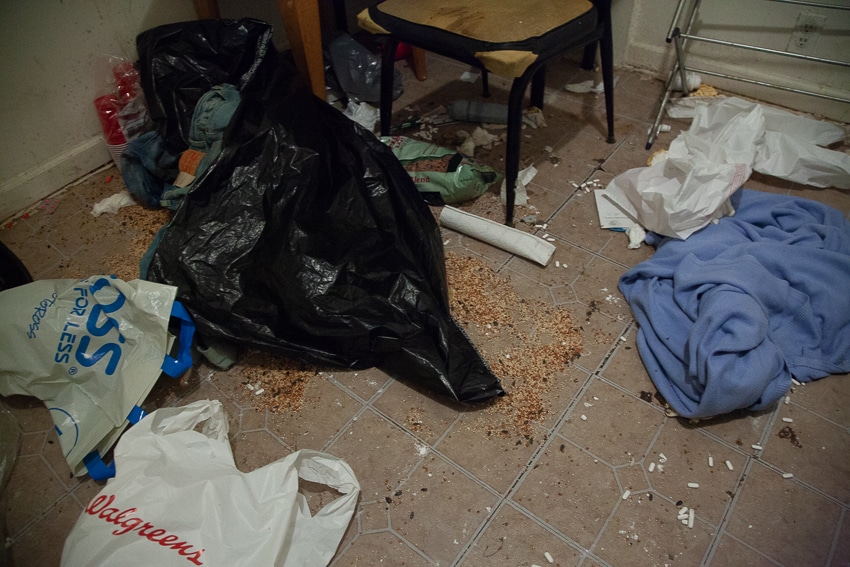 Rat feces and pills mixed up together. Photo by Abraham Rodriguez..

This same tenant had an illegal detainer filed against him in September, which lawyers from Bay Area Legal Aid fought and won. The eviction described this senior citizen, who was barely mobile, as a nuisance.

John Coté, a spokesman for City Attorney Dennis Herrera, wrote in an email that the property had been foreclosed on about a month ago. The lending company, GreenLake Asset Management, had taken ownership of the hotel from its previous owner, a limited liability company called Feng 24 LLC, and formed a new company dubbed “Mission 24 LLC” to run the hotel.

“They have this opportunity to make substantive improvements in short order, and we’re closely monitoring their progress,” Cote wrote.

State documents show that Mission 24 LLC’s paperwork was registered with the Secretary of State on Oct. 24 and listed Kathy Kim, an employee of GreenLake Asset Management, as the LLC’s agent. Mission Local called Kim at her South Pasadena office.

Kim, however, claimed she was not in her office and actually out of town. She said she could not tell us who the property managers are on-site. She swiftly ended the phone call. 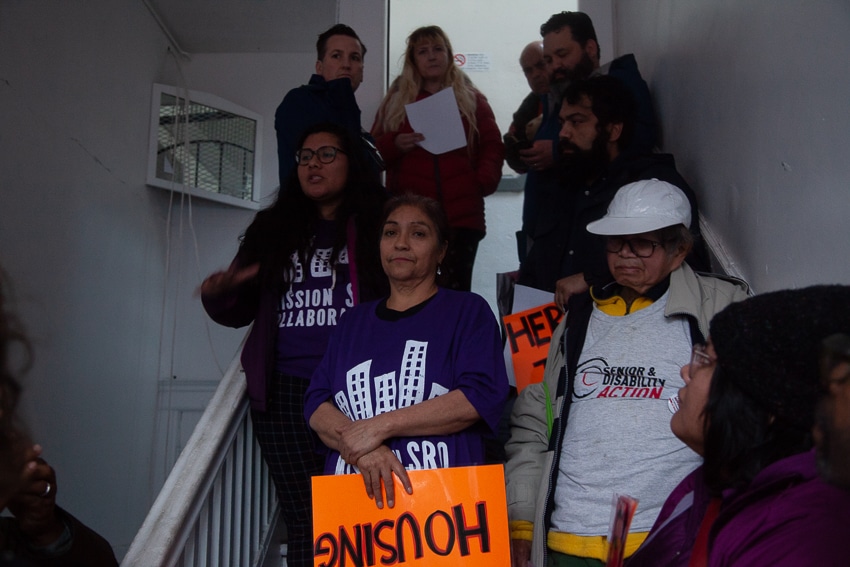 Tenants and activists caroling inside the stairwell lobby of the Utah Hotel at 1312 Utah St. Photo by Abraham Rodriguez.

Diana Alonzo, an organizer with the Mission SRO Collaborative, said that, since September, no fewer than four three-day eviction notices have been sent to tenants. And, while the LLC that owns the hotel has changed, these evictions are still being moved forward.

The notices cited rationales such as fighting, nuisance complaints, and drug use — which the tenants say are fabricated.

“These are families and seniors who have been here for years. We want to preserve this hotel for vulnerable tenants,” Alonzo told the crowd of demonstrators earlier this week.

The hotel’s remaining tenants, who are occupying nine out of the 24 units in the building, say that its owners are purposely leaving the building in squalid conditions to force them out.

Jimenez told Mission Local that her entire family received eviction letters in the mail. Some of the letters were even addressed to her teenage children.

Jimenez said that her landlord, the previous owner of the hotel, Ramirez, has been using deceptive tactics to try to evict her and her family. At one point, Jimenez says that Ramirez’s secretary even offered to pay for an Uber if Jimenez would sign documents that she suspected were an agreement to leave the building.

Other tenants reported being on the receiving end of similar schemes by Ramirez to force an exit from their homes.

Ramirez, however, said she is no longer the owner of the property and confirmed that it had been foreclosed upon in November. Ramirez said that the hotel was now being run by Jonas Judd at Bay Property Group, an Oakland-based property management firm.

Calls placed to Judd went straight to voicemail and were not returned.

Mission Local asked Ramirez why people kept saying she was their landlord, but she indicated that she did not know. She did, however, describe what plans she held for the hotel.

“I wanted to clean it and build something nice, something for the Latino community,” Ramirez said in Spanish.

She then directed any further questions to Judd. 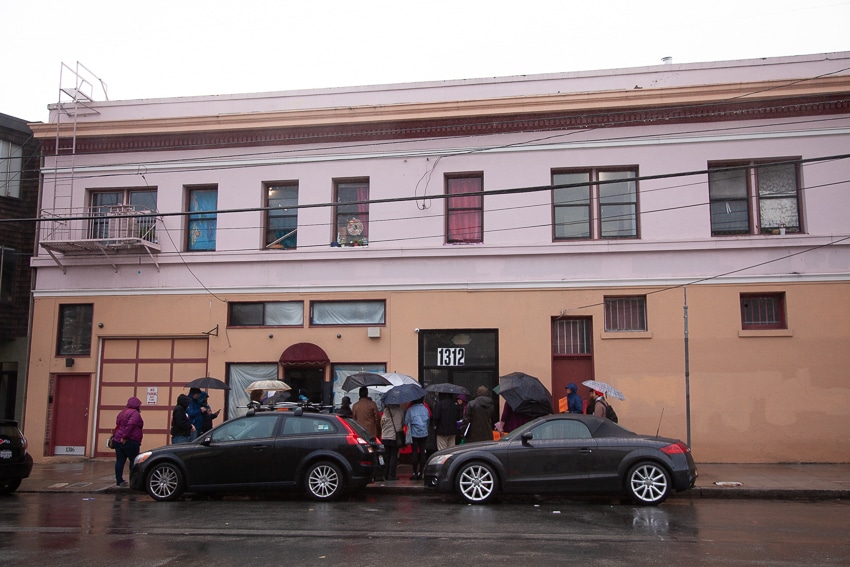 While the caroling began late Wednesday afternoon, four more tenants walked downstairs, joined in and thanked the crowd for its support.

These songs, however, were not of the joyful holiday variety — instead, they were rewritten to feature themes of displacement, evictions, and homelessness.

One song was written to the tune of Walking in a Winter Wonderland.

“It’s falling apart/The owners have no heart/living in the Utah Hotel,” the activists sang.

Jimenez — who has been renting a room with her family, including three kids, at the hotel for four years — said that conditions are terrible for what they pay in rent. For one room, she spends almost $1,000. But until recently, there was only one bathroom and one shower available for the entire building.

Juan Garcia, an organizer with the Mission SRO Collaborative, pointed out shoddy construction as he walked through the largely empty hotel. He noted leaky pipes, windows that wouldn’t open or close, and poorly installed sinks.

One sink, he demonstrated, wasn’t even bolted down to the floor. Woe to he who puts his or her weight on this sink: When Garcia opened the cabinet doors beneath the sink, he revealed a used condom.

“It’s been there for a while,” Garcia said, adding that he’d seen it in his last tour of the place some weeks back.

Renters here told us that the property management company in charge of the hotel is replaced with a new one on a near-monthly basis. With the constant switching of property management groups, the tenants have to find a new way to deliver their rent every month. Sometimes it’s a web portal, other times they have to submit checks in person.

But as the city tries to, in Cote’s words, steer the hotel into “the hands of responsible owners,” people here are still suffering.

And yet, many tenants would prefer to stay. That’s her only option, said Rebekah Casella, an eight-year tenant at the hotel. Casella said if she were forced out, she would have no choice but to leave the city with her disabled partner and two dogs.

Casella said she was given an eviction notice last year, but got legal help and successfully fought it in court. She said she won a one-year extension but is unsure of what the future brings.

“As long as you stay in your room and don’t interact with anyone, you’re fine,” Casella said.