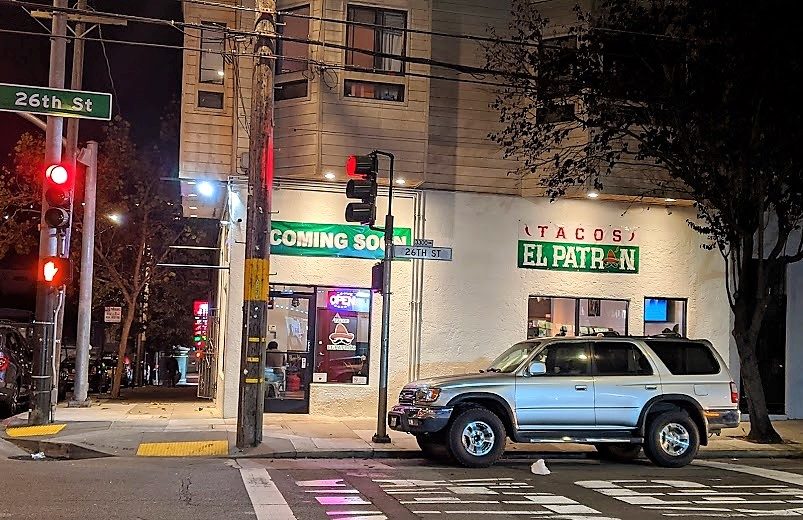 Well, we’re back here on this corner again – where Nayarit, sadly, came and went, followed quickly by Troje, which had an even shorter lifespan (I don’t think the ink on my review of Troje had even dried before it shuttered). This unlucky-in-love space at South Van Ness and 26th is now the second home of Tacos El Patron (the first is in Pleasant Hill), a family-owned and run taqueria.

The new owners didn’t do much to change the décor (it was all still so fresh!). But they did add a few Frida Kahlo prints, Day of the Dead tchotchkes, and  big-ass TVs  (blasting Latin music videos quite loudly, unfortunately). It has been eons, it seems, since I reviewed a taqueria. But this is not just any old taqueria. And yes, we have plenty of great ones in the Mission, but I was excited to have something new to try, and I’d heard that some of the food was a bit different than our other taco-and-burrito shops.

For example, Tacos El Patron’s most popular taco is the birria. 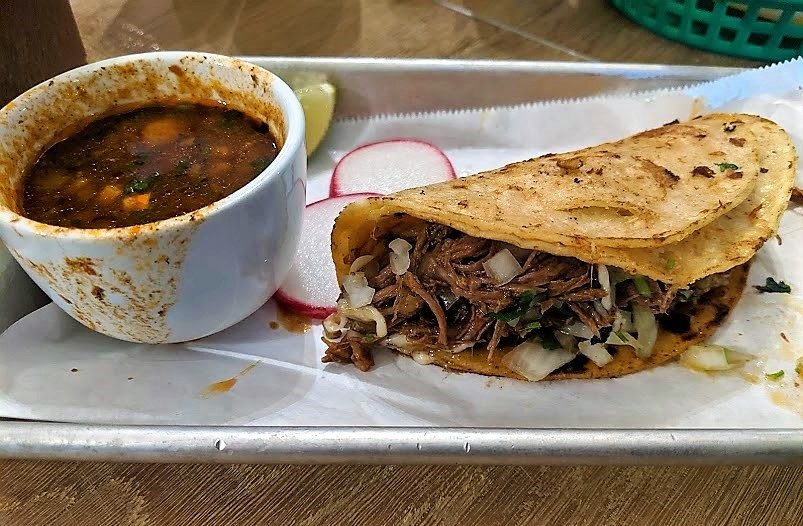 Or more accurately, the queso birria taco (also known as quesabirria.) Trending in Los Angeles for many years now, it’s been making its way up north. (My first ever was only a few months ago, at a taco truck at El Cerrito’s Off the Grid.) I always knew the word “birria” to mean “goat,” but it has come to represent just about any stewed-meat taco, such as lamb or beef, often served up with a cup of consomé – the flavorful broth resulting from the stewing process.

Here, beef is cooked with onions, herbs and spices until meltingly tender. The tacos are then covered in cheese, griddled, and the whole thing becomes this wonderfully crunchy, gooey, soppy, juicy, utterly delightful mess. These weren’t quite as cheesy as I’d had before (and you have to ask for the cheese), but they were amazingly delicious. The broth was rich and deeply flavored – make sure you dip the taco with each bite! A great combo, and very filling. This isn’t your normal Mission taco fare, and I was bereft after the first bite knowing it would be over soon. 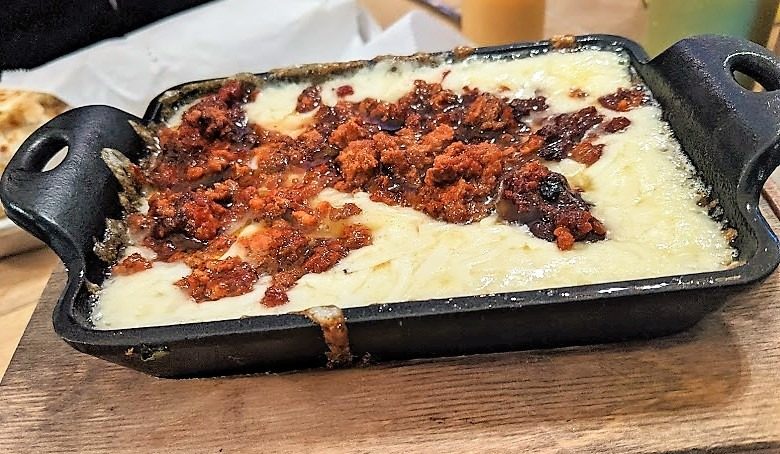 Here, it came in a little, red-hot, cast-iron platter, with corn tortillas. Difficult to eat because of the never-ending stringy cheese phenomenon, but it was quite scrumptious as well. So. Much. Cheese. Most of it came home with us. 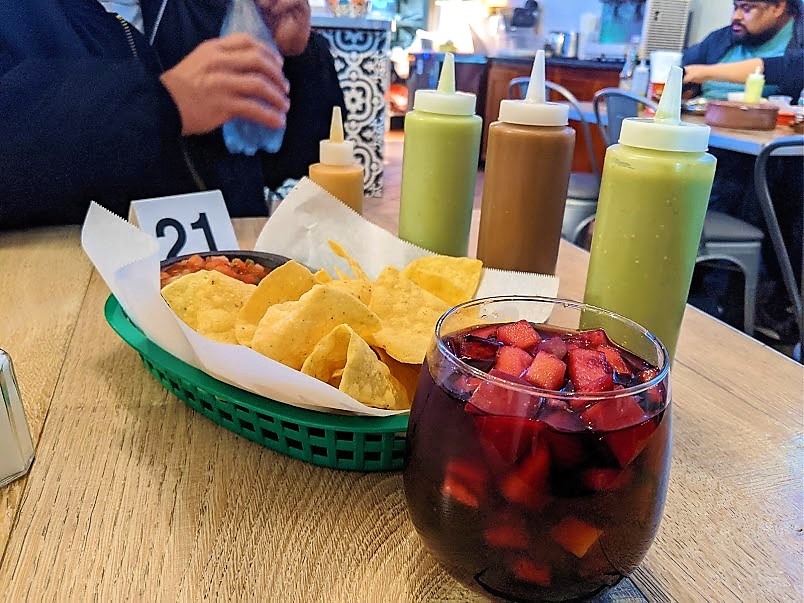 They serve beer and wine, sangria, and Micheladas. And in the non-alkie-realm, Mexican sodas and aguas frescas. I loved the sangria – it was not unbearably sweet, like so many can be.

For his dinner, BF got a (*snore*) super burrito. At least he tried it with the suadero. 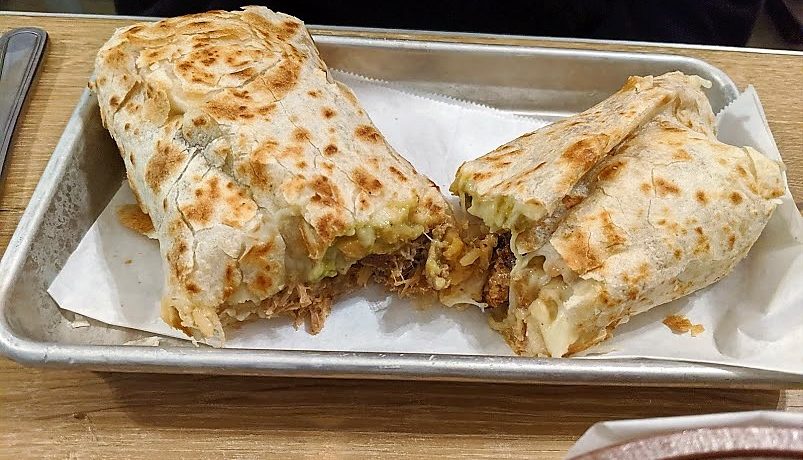 Suadero is a cut (brisket) that we don’t see very often in our Mission taquerias; it is more ubiquitous in Mexico City than carne asada is here. It’s a wonderful, beefy cut, but it was a bit difficult to discern the taste of the meat in this griddled burrito, what with all the guac, rice, beans and sour cream. And the BF isn’t a fan of griddled burritos to begin with (hot guacamole and sour cream? No thank you.). So, he wasn’t thrilled with his meal. However, he took half of it home and we tasted a bit of the meat when it had cooled down – great! I believe the best application would be in a taco.

The birria, shrimp, and fish tacos (tacos especiales), I am told, come on regular corn tortillas, but the other taco flavors (lengua, tripa, carnitas, cabeza, etc.) come on house-made. And, if you order two tacos, you get sides – nopales, frijoles, grilled onion … that’s certainly not an everyday taqueria thing. Also intriguing on the menu are mulitas – mini quesadillas stuffed with the protein of your choice, guacamole and pico de gallo. And alambres – much like fajitas but with bacon, in addition to meat, cheese. onions and peppers. Definitely looking forward to our second visit.

The music videos weren’t blasting this time, happily, but the place was pleasantly lively. I ordered a cabeza and a tripas taco, and opted for roasted onion (which comes wrapped in foil, roasted, and turns into a soft and sweetly charred hunk) and Mayocoba beans with bacon as my sides. BF got the alambres with the suadero. I also got a mulita (again, like a fat, over-stuffed quesadilla, with more meat than cheese. They also have a veggie version.), with al pastor.

The whole shebang is served enticingly and abundantly on a sheet pan. 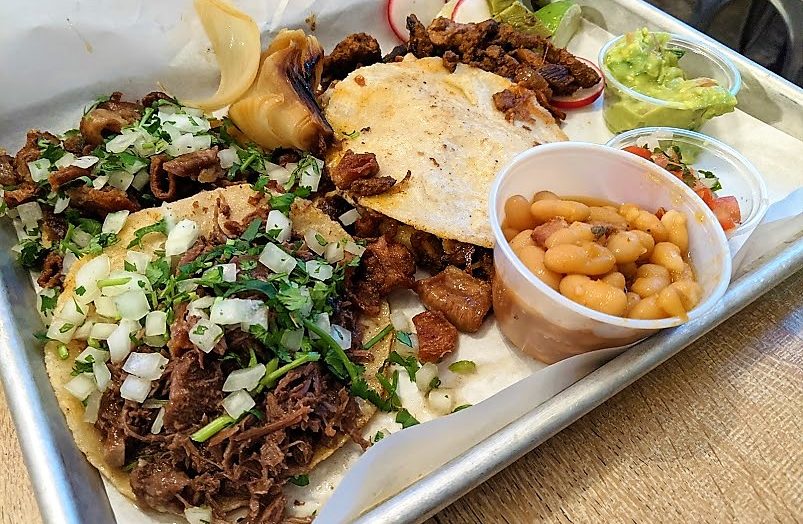 The cabeza taco, bottom right corner, was the best of what I ordered, really tasty and tender. I could not discern if their homemade tortillas were made from masa harina or fresh masa, but you could definitely tell they weren’t the supermarket kind. The beans were sweetish and excellent.

The tripas (top right corner) were cooked way too crunchy for my taste (and I lurrrve me some tripas), with some bits harder than others. Hard to chew, and I ended leaving most of it behind. The mulita (center) was good but, oddly, the meat had almost a liver flavor. BF tasted it too. I asked and they confirmed that it was indeed al pastor (pork). It also clearly wasn’t the traditional prep, cooked on a trompo (vertical rotisserie), but cut into chunks, and some of it was a little tough. It also didn’t have enough of that bright, pineapple-y/cuminy taste that defines al pastor for me, so while it was fine, it didn’t taste much like what I was expecting. I didn’t finish it, too full, but I probably wouldn’t order it again.

BF’s plate of alambres, however… 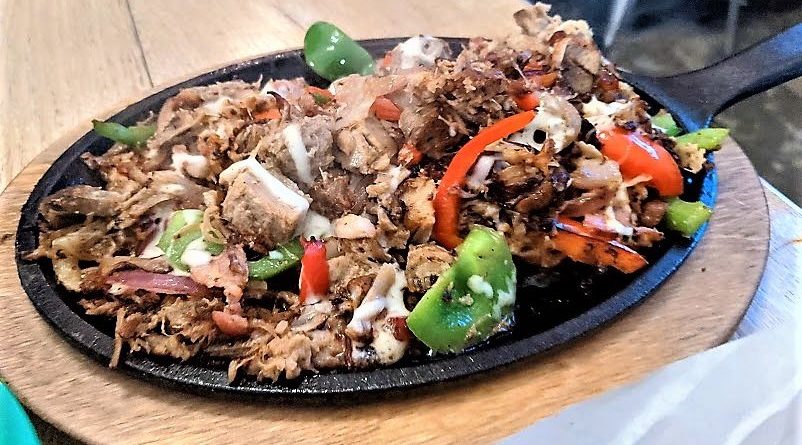 … was wonderful. Full of bacon and perfectly cooked suadero — charred and beefy – served with tortillas. He barely made a dent in it, and we took most of it home. Portions are somewhat over-sized here, so they’re a good value, too.

There’s more to try on this varied and interesting menu: Enchiladas, fish and shrimp tacos, ceviche … but I’m not sure I can come here without scoring another quesabirria. You shouldn’t either.

On both our visits, the service (the owner’s daughters) was warm and friendly, with both young ladies coming around to check on how we were doing, if we needed more chips, and clearing emptied plates. And, also on both visits, Tacos El Patron was already more full than the other two places that preceded it had ever been, by a long shot. I think this corner of the Mission was just crying out for a taqueria to call its own. Here’s hoping that this is the place that sticks.