Score 0%Score 0%
Dyanna Loeb aka Dyna*Mic reads her piece at the Iluminando El Camino event. “We really need to know our history as immigrants and stand in solidarity with other immigrants,” she said.

At the beginning of Thursday night’s performance at the Mission Cultural Center, audience members were asked to raise their hands if they were immigrants or the children or grandchildren of immigrants.

Nearly every hand in the crowd went up.

The event, titled “Iluminando El Camino” or “Lighting the Way,” presented by the Jewish Community Relations Council, brought together diverse performers, each with their own story of immigration. The performance as a whole was a reminder that storytelling can be activism, a way to bring a community together to share in the loneliness and struggle that come from uprooting your life and starting a new one.

One of the performers, Julio Navarrete, moved with his family to the United States from Mexico in 1992. He was 8 years old. When he asked his mother why they were moving to the United States, she responded, “If we stay here, we’re going to starve to death.”

Navarrete spoke of his struggles in the new country, making jokes about American food – “I don’t like the corndog very much. The taste confuses me.” — and speaking “English” with his sister. “Really, it’s just Spanish with our version of American accents,” he joked.

Navarrete, who is undocumented, attended college at San Jose State and went on to work as a high school Spanish teacher. “I hear my undocumented students talk about their struggles and I want to scream my truth,” he said, his voice shaking with the emotion behind the words.

“I want to yell out loud that I know what they’re feeling. The hopelessness due to an uncertain future. The frustration of knowing that so much is out of reach. The powerlessness to change our situation. The fear of being separated from our families. Because I feel the same thing 100 times every day.”

There were differences, too, she noted. Her grandparents moved out of fear, fleeing with few possessions, while she moved by choice, arriving with suitcases full of belongings. Her grandparents were forced to change their names, while Frank chose to change hers.

The recession forced Frank to move back to the United States, and she spoke frankly of the complex feelings that come with being an immigrant: the doubt she felt in her new country, the struggle of working to support herself, the disappointment she felt in herself when she had to move back.

Other performances focused on memories of home and community. Sharron SK Williams shared stories of her youth in Belize, each one – gossiping around the well, breaking coconuts and bananas on a wooden grater, protecting the young ones from snakes — told with vivid detail, as if it had happened yesterday.

Singer, poet and “raptivist” Aisha Fukushima sang a piece by Palestinian poet Mahmoud Darwish as well as her own poem “Poet Tree.” Her powerful melodies filled the theater as she sang, “Let me pick you a fruit from the poet tree, seeds of change, roots generations deep…. Let you taste the bittersweetness of my history.”

The piece, she said, was inspired by her time living in Dhakar, Senegal, when she went to visit the “point of no return doorway,” part of a memorial and museum of the trans-Atlantic slave trade.

Dr. Natalia Ramirez shared thoughts and short snippets of the experience of living in a new place and the longing for home.

Dyanna Loeb, aka Dyna*Mic, told a story about helping a group of fifth-graders relate to their own immigrant histories in order to overcome prejudice and understand the communities around them.

“We really need to know our history as immigrants and stand in solidarity with other immigrants,” she said after the performance, adding, “I really love the idea behind the event and I wanted to get behind the message of JCRC and what they’re trying to do.”

“I think it’s important to recognize both the challenges immigrant communities face and also the unique ways that having such a diverse community enriches San Francisco,” said organizer Laura Rumpf.

“There’s a general theme around Hanukkah and the holidays around sharing hope and light. We’re looking towards a new year, and hopefully one that will be a good one for immigrant justice.”

At the end of the performance, the audience was asked to pick up, sign and mail cards addressed to Gov. Jerry Brown. “As many as 2,400 of our California neighbors will be deported because of the ‘Secure Communities’ program,” the preprinted cards say. “Please work immediately on a TRUST Act that will respect immigrant communities and protect family unity.” 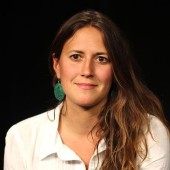