Just a couple of days ago I was fretting that our Fourth of July plans were going to get rained out. Instead, we’re being graced with deliciously sunny days. When does that ever happen on a three-day weekend in the middle of a San Francisco summer? I’ve even heard rumors that thermometers may top 70º in the city on the fourth!

So: Three-day weekend, check. Warm weather, check! You know what that means, right? BBQs are a must! Get ready to throw your favorite veggie sausages on the grill, and don’t forget to serve up this killer side. Be sure to wear your “Vegans Rule, Omnis Drool” tee, because the old-school mayonnaise bomb previously known as potato salad is about to be usurped. Begging and high-stakes negotiations are not uncommon around this potato salad, so you may want to double or even triple the recipe.

The Secret’s in the Sauce


Well, sort of, anyway. The salad is dressed in a basic French vinaigrette, then spiced up with some red jalapeños and cilantro. The other secret is in the freshness and quality of the produce you’re using. The veggies really get a chance to shine since you’re not covering them up in a heavy sauce. 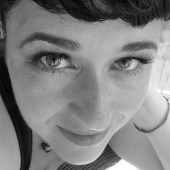