Following the Craft Beer Craze Through the Mission “I taste citrus, a little bit of lemon,” he offers, unceremoniously, as he assesses the beer’s flavor. “It’s kind of like one of those limonata Italian sodas.”

Brewer-Hay is drinking inside Monk’s Kettle, a gastropub on 16th Street and Albion Lane known for its six-page-long beer menu. He’s the man behind Elizabeth Street Brewery, an unofficial home brew operation run in the basement of his Noe Valley home.

As several area breweries showcase at the Great American Beer Festival, the nation’s premier beer festival held this weekend in Denver, he and Shaun O’Sullivan, the owner and “Chief Hop Head” of the 21st Amendment Brewery in SOMA, are giving Mission Loc@l a tour of their favorite craft beer bars in the Mission.

The lager Brewer-Hay is drinking comes from another one-man operation located just north of Santa Rosa. Its only been made once, and can only be found in the city at Monk’s Kettle.

Places like Monk’s Kettle, Shotwell’s, Pi, Rosamunde and others that have opened in recent years have made the Mission the epicenter of a bar subculture that’s dedicated to serving craft beer made almost exclusively in Northern California. Craft beers are produced by small-batch, independent and/or artisanal breweries, and have become emblematic of a region that values locally made products, simple ingredients and creative approaches to classic gastronomic icons.

As of July, 2010, there were nearly 1,600 craft brewers operating throughout the country, according to the Brewers Association. Last year, U.S. craft brewers sold an estimated 282 million gallons of beer.

“We all boo-hoo Bud Light, but both are made the same way,” says O’Sullivan, referring to the difference between mass-produced and craft beers. “We all have yeast, malt and hops, but the difference is craft brewers are more intimate with their materials.”

Craft brewers take special care in exactly what varieties of ingredients they use. At its basic, beer can be made with four staples—malted barley; yeast; hops, which are flower clusters that provide beer’s bitterness; and water.

Yet, craft and home brewers seek out variations in ingredient types or production methods that allow them to experiment with flavors to a degree not possible by large-scale producers like Anheuser-Busch and Coors. The difference in fragrance, for example, between the flowery spiciness of Cascade hops and the herbal woodiness of Willamette hops would be immediately noticeable to someone like O’Sullivan. To the average person, both would just oddly smell like Grape Nuts cereal.

“It’s about peer education,” says Christian Albertson, co-owner of the Monk’s Kettle, saying the growth in availability of unique and smaller production beers fundamentally is about knowledge sharing among brewers and drinkers.

Monk’s Kettle has more than 170 beers on the menu, and according to Albertson, bartenders are required to know about every single one of them.

After Monk’s Kettle, the next stop on Brewer-Hay and O’Sullivan’s bar crawl is the nearby Sycamore, which opened less than two months ago on Mission Street and Sycamore Lane. The two beer makers joking outside of the Sycamore.

Brewer-Hay takes a sip of a freshly ordered Trumer Pilsner, and with the same look of inquisitiveness he had with his Moonlight Special, passes it to O’Sullivan who closes one eye and dives his nose into the glass. He then takes a sip of the Czech-style pale lager, swishing it quickly in his mouth before swallowing.

The two met at a craft brewer conference several years ago, and together won a gold medal at the World Beer Cup this year for a strong ale they collaborated on.

“Tastes like something chased the line,” O’Sullivan says, suggesting that whatever was previously on tap hadn’t been completely cleared from the keg system. Brewer-Hay nods in agreement.

“Beer is like an indie band that makes it big,” says Brewer-Hay, with Bob Dylan blaring loudly from O’Sullivan’s car speakers, as the two beer makers make their way from the Sycamore to Bender’s on South Van Ness and 19th Street. “You always want to be the one to introduce your friends to that new band.”

Both Brewer-Hay and O’Sullivan have a penchant for analogy. They attribute it to being accustomed to speaking about beer in plain, everyday language. “You won’t ever hear me say ‘bouquet,’ ” says Brewer-Hay.

He’s right. The two men approach beer without the pretense often found in wine tasting. “Craft beer is so big because of its non-snobbiness,” says Brewer-Hay, to which O’Sullivan adds, “It’s about being authentic.”

Walking into Bender’s, fixed gear bikes hang from wall-mounted racks, and on this particular night, a Bender’s employee readies a kiddie pool in the center of the bar floor for a Jello wrestling competition.

Having been in the subdued, more-refined Monk’s Kettle just hours before, it seems odd to consider Bender’s a part of the same scene. Yet, the tattoo-covered bartender pours O’Sullivan a pint of Pliny the Elder, the double India pale ale from Russian River Brewing Company that has won numerous awards, including two gold medals at the Great American Beer Festival. “It brings people together. It’s the original concept of the public house,” says Brewer-Hay, referring to where the term pub came from. “People want to feel a part of a neighborhood.”

Leaving Bender’s, and now a handful of beers into the evening, Brewer-Hay and O’Sullivan are animated with hugs and hi-fives, recalling memories and imagining future brewing collaborations. They also offer theories on San Francisco’s attraction to craft beer.

He has a point. Barely 45 percent of the population of the urban area covering the cities of San Francisco and Oakland was actually born in California, according 2006 Census data.

“Some people are scared with options, but people here tend to want more adventure. It’s probably what brought them to San Francisco in the first place,” says Rich Rosen, who, along with Jen Garris, opened Pi Bar almost one year ago. Both he and Garris are veterans of the food and drink industry in San Francisco.

With its tall, communal table next to a window facing Valencia Street, Pi Bar could be considered the classic pizza and beer joint. But with a menu that exclusively features seasonal beers from local breweries, it has quickly become a destination for what you can drink there more than what you can eat.

As O’Sullivan and Brewer-Hay walk into Pi Bar for their final drinks of the night, Garris greets them with familiar smiles.

“Since we’ve been open, I’ve only had two people come in asking for a Corona,” says Garris. “Only one walked out. I gave a Trumer Pilsner to the other, telling him it was brewed right here in Berkeley. He loved it.” 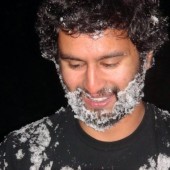