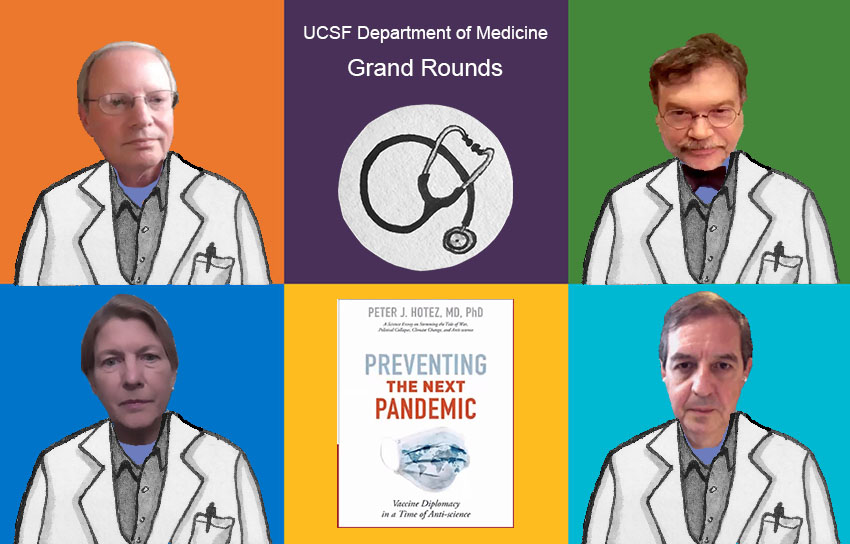 Understanding the complexities of vaccine development, manufacturing, distribution and uptake in the middle of a global pandemic is a difficult task—even without a 75-minute time limit. Add to this discussion what UCSF Grand Rounds moderator Dr. Bob Wachter called a “dizzying presidential campaign” and “issues of diplomacy and equity,” and the outlook becomes unclear.

A “go it alone” vaccine strategy

To begin his presentation, co-director of the Texas Children’s Hospital Center for Vaccine Development Peter Hotez discussed the demographic he believes is most impacted by covid-19: “the poor living among the wealthy.”

The prevalence of covid-19 among the Black and Latinx communities in his area, Houston, is a case in point. It’s another example of the health disparity of covid-19 that doesn’t get discussed enough in the global health community, he said. The same is true in San Francisco, where a third of the city’s cases are in the eastern neighborhoods and 51 percent of the cases are Latinx — mostly the working poor.

Hotez is working on a vaccine, but is not part of Operation Warp Speed, the partnership between the government and eight selected pharmaceutical companies to produce a vaccine quickly. Warp Speed’s goal, Hotez said, is to build factories before we know the effectiveness of vaccines. It also combines development phases. Doing so, however, does not mean speeding up clinical trials as many believe, he said.

Hotez champions the project but noted some disadvantages: heavy costs without the assurance that they will pay off, and the lack of transparency, even as the anti-vax movement grows.

His other issue is, “it’s a very much ‘us go it alone’ strategy.” “Us” meaning the United States. That strategy creates a nationalism that is unhelpful. “It was never supposed to work that way. I mean, history tells us success in global access for vaccines depends on international cooperation, what I like to call ‘vaccine diplomacy.’”

He fears for low and middle income countries, especially those with mega cities amidst a U.S. climate that isn’t trying to figure out what to do for the rest of the world. The U.S. is “losing a very critical leadership role, and that will come at the expense of geopolitics,” said Dr. Jaime Sepulveda, executive director of the UCSF Institute for Global Health Sciences. “China and Russia are very aggressively taking over leadership in Africa and Latin America.”

Hotez’s vaccine project at the Texas Children’s Hospital is now going into clinical development. It  will eventually be scaled up by Biological E, an Indian company, to make one billion doses.

The final problem for any vaccine, Hotez pointed out, is resistance to vaccines. Half of Americans would refuse coronavirus vaccines, according to two major surveys by Reuters and the Associated Press.

“There’s this globalization of American anti-science that worries me,” Hotez said, noting that the World Health Organization has listed vaccine hesitancy as one of the top ten global health threats.

During his presentation, Sepulveda hinted at the complexities of global vaccine allocation. “Assuming, as Peter said, we have one or more safe and effective vaccines by early next year, which ones should be distributed by whom, to whom and where?”

“The country of origin of manufacturing might have an influence in the geopolitics of distribution,” Sepulveda said, describing the export controls that have been taken to limit the export of remdesivir and PCR tests as well as the “frankly racist attitudes from the White House against ‘shithole’ countries.”

The U.S. has already allocated billions of dollars in advanced purchasing agreements with vaccine producers and there is a real danger that vaccine nationalism will play a role, he said.

Sepulveda explained the various allocation principles being created by groups such as the World Health Organization and the National Academy of Medicine, noting that many are prioritizing criteria based on risk, preventing harm and achieving equity.

Because initial vaccine quantities will likely be scarce, he recommended that initially, 50 percent of vaccine doses should be allocated to healthcare workers, 25 percent to individuals with high-risk occupations, and 25 percent to people with high-risk conditions. He finished with several passionate recommendations to prioritize saving lives over political and economic interests. The November G20 meeting is “the last chance, I think, to reach consensus on vaccine allocation and achieving global health equity,” he said.

Dr. Heidi Larson, director of the Vaccine Confidence Project at the London School of Hygiene & Tropical Medicine, shared some key insights from her five-year study of global trends in vaccine confidence that began in 2015 and ran in 149 countries with 250,000 respondents.

Though the coronavirus pandemic did not change the tune of anti-vaxxers as Larson and many other global health experts thought, she believes that there has been one silver lining to the anti-vax movement.  The antagonism from fringe movements “has been a wake-up call to the vaccine immunization community” that communication and engagement with the public are critical.

Her project found that in the last five years, there has been a slight overall increase in public confidence in the importance, effectiveness, and safety of vaccines. Data she collected with the European Union Commission showed a 17 percent increase in public confidence in the flu vaccine across 28 EU countries since 2018. Yet, elements such as the expansion of social media, a growing rights agenda, and other rising political issues that lead to polarization have enveloped vaccines in a “mesh of issues.”

But Larson holds out hope. She sees the coronavirus pandemic as a “huge opportunity” to build trust. “How governments respond to covid will either support or undermine the success of the current vaccine uptake,” she said.

“I think we have to have some empathy with the population about the uncertainty” with vaccines, Larson said. “The act of saying ‘we understand your concerns,’ rather than saying, ‘you’ve got to get on board, no questions asked’—that’s where the breakdown happens.” The key is keeping the population informed, and building trust.

Hopefully, a few months is enough time to do that.