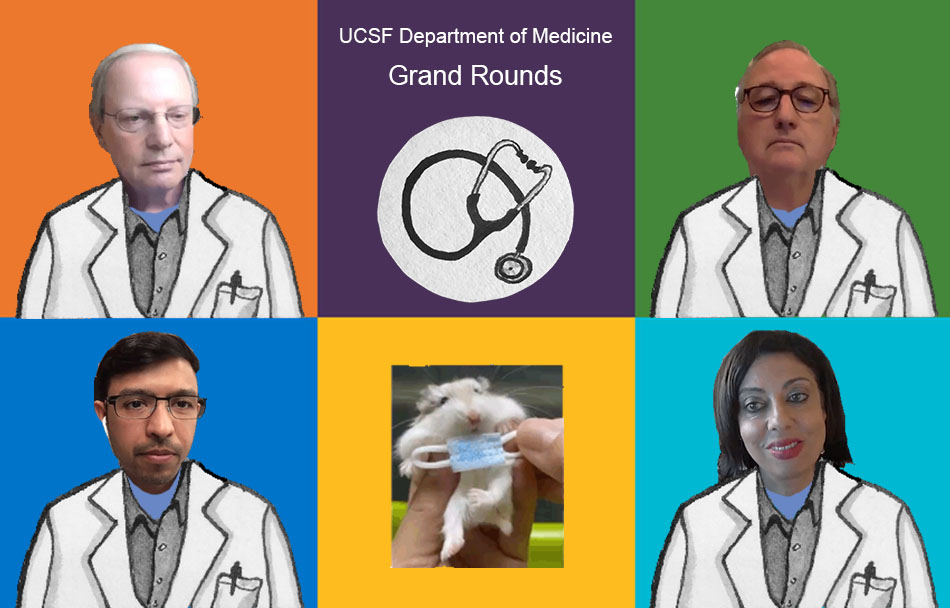 Oh, to be in the days when all we were dealing with was the triple pandemic of Covid-19, economic turmoil and systemic racism. As massive wildfires rage across California, Oregon and Washington, two beams of hope broke through the suffocating smoke in Thursday’s UCSF Grand Rounds: in Department of Medicine chair Bob Wachter’s words, California’s “astounding” low covid mortality rate and an “innovative” approach to combating covid called AeroNabs.

UCSF’s professor of epidemiology & biostatistics, Dr. George Rutherford, came prepared with his usual arsenal of maps and charts to discuss the current state of covid at home and across the nation.

Rutherford estimated that the 190,714 of reported deaths in the United States are probably a 10 percent underestimate, maybe more, as outbreaks spread from the South into the rural Midwest.

“Why is there so much disease in rural areas, you ask? Here is the answer,” Rutherford said, alluding to a photo of unmasked motorcyclists drinking together at the Sturgis motorcycle rally that occurred in August. “When you talk about super-spreader events, this is the classic of all time.”

Rutherford also touched on super-spreader events, saying that they are “essentially accidents” that have little to do with immunity or anatomy. He did note that people with higher viral loads are more likely to transmit the virus than those with lower loads, and that the highest load seems to be around the fourth, fifth and sixth days of infection.

Much like national trends, Rutherford said that there has been a gradual migration of covid cases into rural counties in California. In the Bay Area, there have been over 92,000 cases and 1,200 deaths recorded. “We are sort of on the upswing in deaths but are clearly on the downswing in terms of cases,” Rutherford said.

What about vaccines? They “seem to be cooking pretty successfully,” Rutherford said, except for a problem a few days with the AstraZeneca vaccine, when one vaccine recipient was hospitalized with an autoimmune disease. She has been discharged, but the trial remains temporarily paused.

And there is another potential roadblock to other vaccines. Two of the three vaccines in Phase 3 trials have “extreme cold chain requirements.” This means the vaccine doses need to be stored at -70 degrees Centigrade until 48 hours before use, which Rutherford said “is gonna be a problem.” Delivering vaccines from the manufacturer to the site where they will be administered will require special “cool boxes” to keep them at the right temperature in transit. Once delivered, they will require special freezers for storage.

Rutherford also discussed the priority populations for vaccines the Centers for Disease Control and Prevention recently shared with state health departments. The primary recipients will be healthcare professionals and long-term facility staff, with the secondary being essential workers. Who qualifies as an essential worker remains up for debate; Rutherford said he has farmworkers in mind.

Dr. Monica Gandhi, associate chief of Zuckerberg General Hospital’s Division of HIV, Infectious Diseases and Global Medicine, used a variety of studies and data from the U.S. and Europe to show that covid’s mortality rate appears to be declining.

There are four possible reasons for declining death rates, Gandhi said. It could be because more young people are getting infected and they are less at risk for serious illness, but the same German data shows a lower death rate across age groups. Another cause could be improved treatment plans and preparedness.

The final possibility is increased population immunity—both willing and unwilling. As discussed in a previous Grand Rounds, Sweden never went into lockdown, in an effort to achieve herd immunity. Other places, like New York and Italy, unwittingly developed some herd immunity when the virus spread out of control there, Gandhi said.

Gandhi said that some “really hopeful data over the last four weeks” shows really strong cellular immunity generated, even with mild asymptomatic infection. She discussed her new article, co-authored with Rutherford and published in The New England Journal of Medicine, which argues that “masking may be a poor man’s vaccine.” If widespread masking leads to asymptomatic infection (instead of symptomatic), and asymptomatic infection leads to immunity, over time, parts of the population will become immune without being vaccinated.

AeroNabs, an inhalable protection against covid-19

Dr. Aashish Manglik, assistant professor of Pharmaceutical Chemistry at UCSF and the only newcomer at this week’s Grand Rounds, came on next to discuss a powerful potential weapon to fight covid dubbed “AeroNabs.”

His team engineered these nanobodies to be more potent. The resulting molecule is “quite heat-stable, can survive aerosolization and being dried down to powder,” Manglik said. It is also cheap and relatively easy to produce. This means that it can be inhaled, a favorable alternative to other methods of passive immunity, such as convalescent plasma, which is done through blood transfusions.

Manglik’s “pipe dream” is prophylactic (preventative) use; those who may be exposed to the coronavirus would inhale AeroNabs daily to prevent infection in the first place. A more tangible goal is using AeroNabs as a very early therapeutic treatment to inhibit the spread of the virus in the body. The product is still in “early stages,” however, and his team is searching for funding When the sky is red and the state is on fire, any hope seems worth reaching for.

Grand Rounds will continue with covid-19 coverage each week through September 24; afterwards it will alternate every other week with non-covid presentations. See our previous Grand Rounds coverage here.