Police reform: Has the moment passed us by? 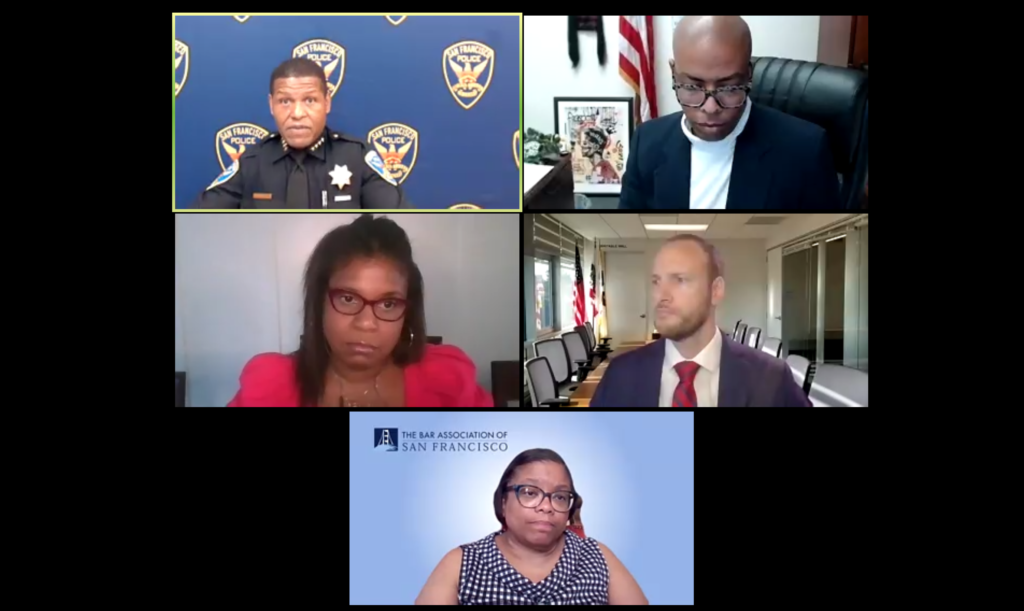 Every speaker at a Tuesday night panel on San Francisco police reform and accountability agreed: Police conduct, policy, accountability, discpline and oversight all need improvement. But the panel offered only glimmers on how those improvements could be realized, and instead focused on why the status quo is so difficult to overcome.

Much of the panel discussion focused on existing processes: how discipline is imposed, why a police shooting requires five concurrent investigations, and how citizens can file complaints against police officers. That meant the evening was akin to a police procedural version of “How It’s Made” that offered few hints that the system needed any changing at all.

Some moments, however, were illuminating. Jackson asked Boudin whether a California bill that changed the required standard for an officer to use deadly force from “reasonable” to “necessary” — AB 392 — would help Boudin file charges against officers more easily.

By and large, it does not, said the DA.

In fact, he said, it was a missed opportunity.

“In its original form, [AB 392] would have … made it easier for prosecutors to successfully prosecute use of force,” he said. “The final version was watered down after a lot of input from police unions across the state.”

He did not go into much detail on how the new law was limiting. But even if it did help, Boudin noted that the new law is not “retroactive” and does not apply to past police shootings, like the Mario Woods case from 2015.  This means it would not be possible for him to use the AB 392 standard to bring charges against the officers involved in any of the highly charged police shootings that took place before the law went into effect in January 2020.

The prior use-of-force standard, he said, “is a very, very challenging standard to overcome.”

While Boudin noted that he’s taking a “hard look at some of those old cases,” and trying to decide whether he will come to a different conclusion as his predecessor, George Gascón, “we have not filed criminal charges in any of those cases,” he said. “We have not come to the conclusion that we can overcome that burden, that hurdle.”

Boudin has several big charging decisions to make regarding police shootings, including the shooting of Sean Moore, a mentally ill man whom police shot on his own porch in January 2017.

Moore recently died in prison from health complications related to the shooting. Boudin must also consider whether to file charges against Christopher Samayoa, the rookie officer who fatally shot the unarmed carjacking suspect Keita O’Neil in the head in December 2017.

Boudin also echoed his predecessor in saying that he has an “ethical obligation” to not file charges he cannot prove. He said even filing charges against police officers in a controversial police shooting “would mean the end of someone’s career. It might mean … personal bankruptcy. It might mean weeks, months or even years incarcerated while they’re presumed innocent.”

“So it’s not a decision that we can take lightly and just see what sticks,” he said. “We can’t take that approach.”

The issue of open police disciplinary hearings also came up. The issue: Why are certain police disciplinary hearings still held behind closed doors? “I understand these discussions and decisions were open to the public at commission meetings,” Jackson said. “Why did that change and why can’t we get back to that system, to your point about transparency in this process?”

This question was fielded by Taylor, the Police Commission vice president. She explained that a 2006 court case, Copley Press v. Superior Court, closed the disciplinary hearings to the public. While a new law requiring the disclosure of police misconduct records relating to sexual assault, dishonesty, and serious use of force — called SB 1421 — may open the disciplinary hearings in theory, “it’s not so clear cut,” Taylor said.

Taylor explained that officers accused of sexual assault or dishonesty must complete the disciplinary process for details of the cases to become public, according to the city’s reading of the new law. And — while not bound to the same high standard as the other two categories — making serious use-of-force proceedings public would still create problems, she said.

“You can imagine some of these cases involve civilian witnesses, and they have personal privacy interests that need to be protected,” she said.

Only in the last eight or so minutes of the 90-minute event did the panelists look toward the future.

“If you could just snap your fingers and make the change, what would you do?” Jackson asked.

Henderson, the DPA director, said he wished police oversight received more funding. While he acknowledged the city’s resources are slim right now, he said that much of the DPA’s work — investigations, auditing, and policy analysis — “have costs associated with it.”

Boudin offered three concrete changes. “One is we should have an absolute prohibition on ever hiring law enforcement personnel who already have a known serious discipline record,” he said.

Two: Stronger measures should be in place to ensure officers police each other when they see misconduct.

Three: The city should relieve police of the burden of the mental health and homeless calls that they are not equipped to deal with.

Next, Taylor said she would bring more Black police officers to the force. Right now, she said, only 9 percent of the SFPD is Black.

“Our recruiting efforts really need to be focused on what our department looks like,” she said. “Who are the people who are going into these communities and do they really understand the lived experiences of the people in those communities?”

She added that “bias screening” should also be required at recruitment “to root out … the old network of white officers who don’t necessarily understand those experiences.”

In terms of training, for example, the police department needs more police officers so other officers can focus on new training, he said. “So we have to really get away from trying to do everything on the cheap when it comes to public safety.”

We attend these forums even if you can’t. Support our work covering police reform.