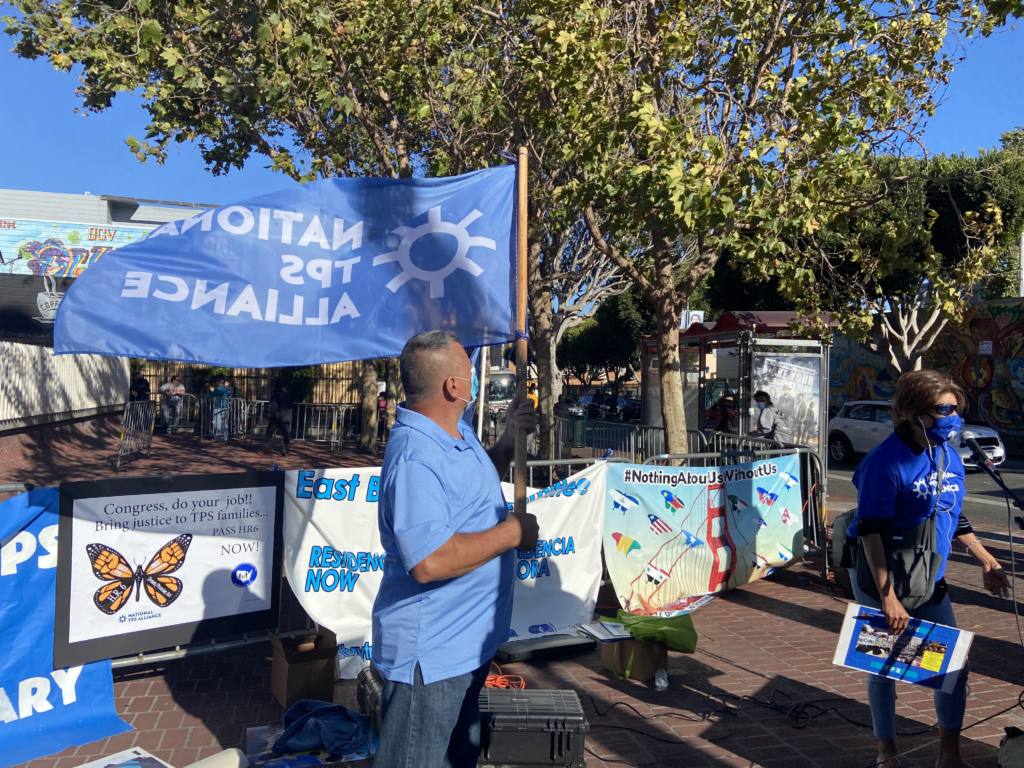 An organizer with the National TPS Alliance waves a flag at the 24th Street Mission BART Plaza. Photo by Annika Hom.

Immigrants from El Salvador and Honduras poured out onto the corner of 24th Street BART Plaza following a morning rally at the San Francisco Federal Building Tuesday to protest a court ruling that poses a threat to their residency in the United States.

The issue at hand, Temporary Protected Status, is a federal humanitarian program that allows immigrants hailing from countries experiencing natural disasters or political unrest to live and work in the United States legally. On Sept. 14, the Ninth U.S. Circuit of Appeals lifted a preliminary injunction that temporarily blocked the Trump Administration’s efforts to end the program for certain countries, including El Salvador, Nicaragua, Haiti, and Sudan.

Immigrants from these nations might lose their TPS protection by March 2021, leading to potential deportations by the thousands.

One of the organizers, Elua Aguilar, kicked off the Mission’s all-Spanish event at 4 p.m.

“Why are we here on this corner?” Aguilar yelled into the microphone. “To defend TPS for all the Salvadoreños and all the Central Americans that live in the Mission!”

“This corner is historic for all the fights launched here in the heart of the Mission,” Aguilar continued.

About 317,000 TPS beneficiaries live in the country and the majority risk losing it in 2021, according to 2019 Pew Research Center data. Tens of thousands live in California, some of whom reside in San Francisco.

Though the program never promises citizenship, as is stated by its name, advocates argue that beneficiaries have settled in the United States and lived in this country for more than two decades, paying application fees and taxes, and building lives here.

It has been a general precedent for presidential administrations regardless of political party to renew TPS designations, up until the Trump administration challenged it for some nations in 2017.

On Tuesday in the Mission, TPS holders shared their testimonies about why when judges vacated the injunction last week, the latest development in the lawsuit, Ramos v. Nielsen, spurred them on.

One of the plaintiffs, 16-year-old Crista Ramos, a U.S. citizen, was on hand.

“I am here to support my mother, my brother, and all TPS holders,” Ramos said. “Vote. Vote for someone who supports immigrants.”

Her mother, Cristina Morales, jumped in.

“This [mandate] just means we’re going to keep fighting,” Morales, a TPS holder from El Salvador, said. “We want justice, to keep our families together, and to have a path toward permanent residency.”

One of the plaintiffs’ attorneys for the Ramos v. Nielsen case, Ahilan Arulanantham from the American Civil Liberties Union of Southern California, told Mission Local that he plans to appeal the Sept. 14 ruling. The opinion was delivered by a three-judge panel, and he is submitting paperwork soon to have the whole Ninth Circuit rehear it. If that fails, he plans to take the case to the U.S. Supreme Court.

“The decision fails to acknowledge what we all know to be true, which is that the Trump administration has been motivated by its racism and its endorsement of white supremacy in its treatment of TPS holders,” Arulanantham said.

The attorney also made sure to emphasize that, due to his pursuit of an appeal, the injunction is not technically lifted: Thus, an employer or the Department of Motor Vehicles, which provides driver’s licenses for TPS holders, cannot deny them work authorization or other documents until the case is officially concluded.

Arulanantham said he advises TPS holders to find alternate pathways to permanent residency; As a result of some legal decisions in California,  TPS holders may now enter citizenship proceedings through a family member or spouse, which had not been previously allowed in years past, he said.

As another response to the ruling, an advocate group called the National TPS Alliance organized a campaign bus that is scheduled to travel across the country for eight weeks and end its journey in Washington D.C., where beneficiaries will continue to advocate for permanent residency to Congressmen.

Claudia Silva, a 16-year-old U.S. citizen, choked up as she detailed the stress that arose from hearing that her mother, father and brother, all TPS holders from Honduras, might have to leave the country in 2021.

She said that her mother is a caregiver, and all her family members are essential workers, like many others who benefit from the humanitarian program.

“This is ripping my hearts — my parents and brother — from me,” Silva said.

At the federal building, Father Richard Smith of St. John the Evangelist Episcopal Church said it was “heartbreaking that TPS beneficiaries in the neighborhood might be gone,” and called it unfair.

“Some of them have businesses,” Smith continued. “Some have made such a wonderful contribution.”

The bus also made an appearance at 24th Street near Bartlett Street while the protest shifted to the Mission on Tuesday afternoon. The bus is decorated with images representing TPS workers as essential workers in the pandemic, and depicts Immigration Customs and Enforcement agents as well as Arulanantham.

The bus departed at 4 a.m. Wednesday for Portland, the next stop on the journey. 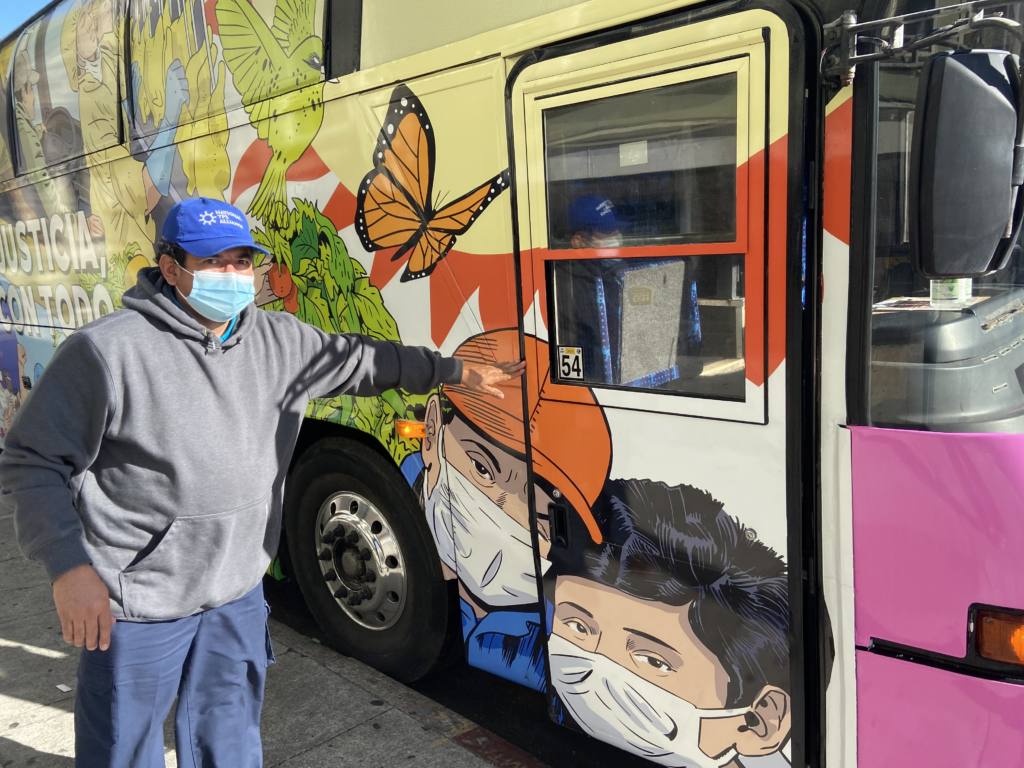 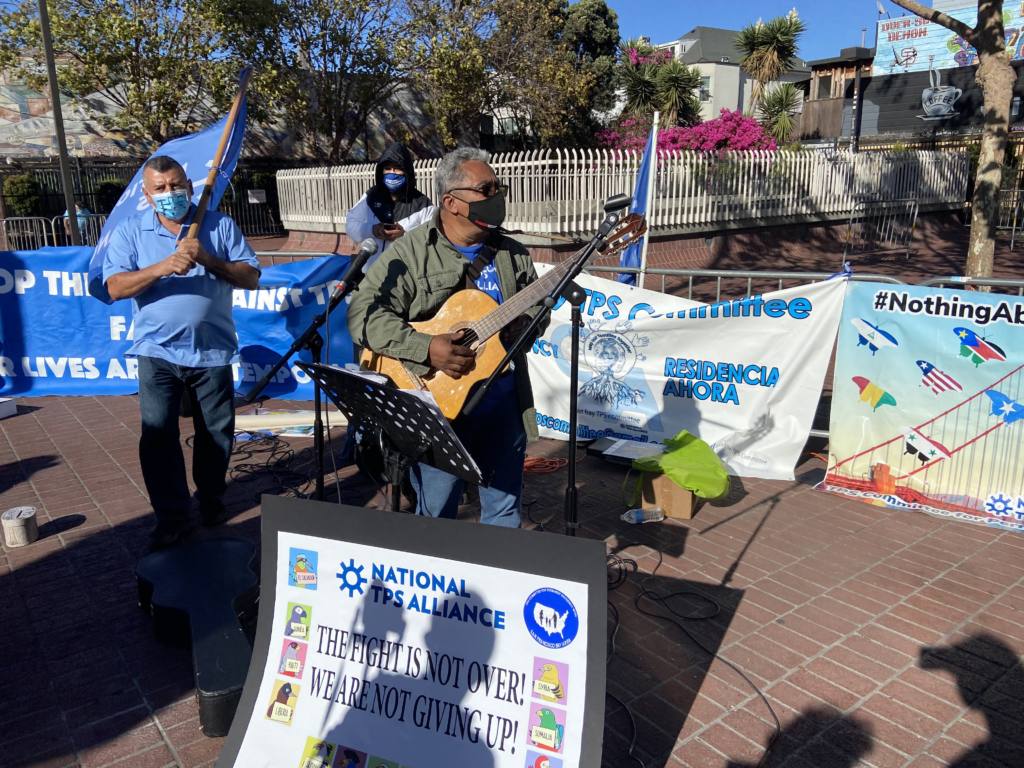 We work around the clock to deliver you the news. Consider supporting us here.