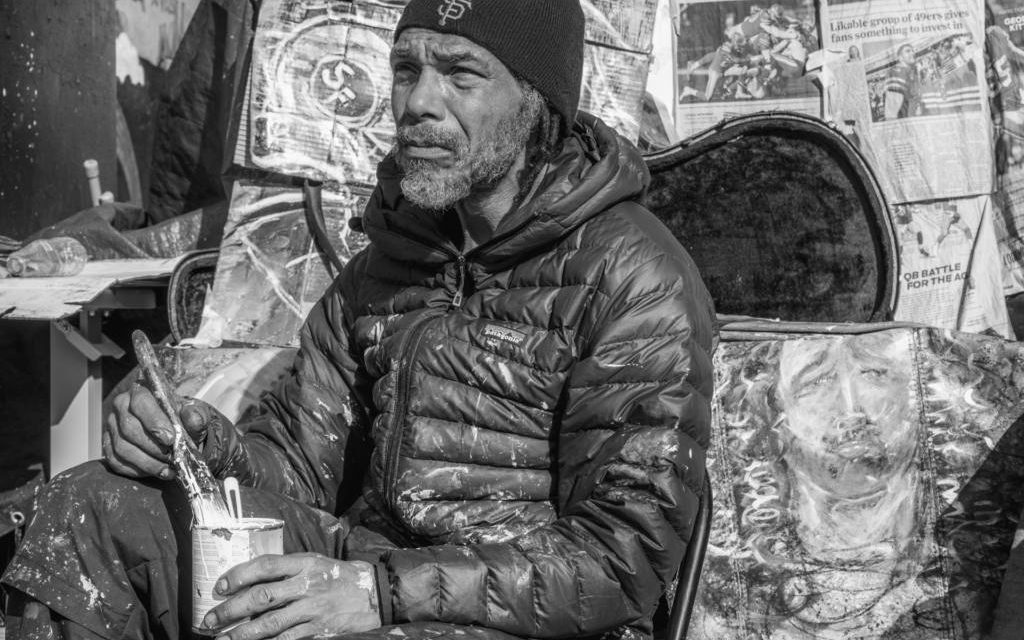 Update: August 13, 2011:  A memorial service will be held this Saturday, August 15th at 12 noon, on the corner of 16th Street and Capp Street  It is being organized by one of Ronnie’s friends, Walter, also known as “Coach,”  wrote Kerry Rodgers, a longtime friend of Goodman’s who also created and managed the artist’s website.

There is a also a memorial GoFundMe campaign.

Ronnie Goodman, a homeless artist and distance runner who has lived on the streets of the Mission District for years, died this morning at his encampment on Capp and 16th Streets.

Rescue workers tried to revive the 60-year-old, but those efforts proved unsuccessful, said Paula Tejada, the owner of nearby Chile Lindo.

It’s unclear how Goodman died. Only yesterday, Tejada said, the artist was helping remove a branch that had broken off from a tree. “We all watched out for one another,” she said.

Goodman, who has shown his art locally for years, said he had been in and out of jail for many years.

Joseph Johnston, a photographer who befriended Goodman, would visit him at 16th and Capp Streets, where Goodman had posted a sign “Art for Food” at his encampment.

Johnston discovered that Goodman was born in Los Angeles, but moved to San Fransisco when he was still a baby. “He recalls living in the hospital-green high-rise projects on Laguna Street and playing in Jefferson Square Park as a child,” Johnston wrote. “He says he probably became an artist because many of the people he hung out with were artists.

“He honed his skill as a portrait artist in prison. Photography was not allowed, and Ronnie became known for his hand-drawn portraits of other prisoners which they sent to their family and loved ones outside.”

Kerry Rodgers, a longtime friend of Goodman’s who also created and managed the artist’s website, wrote in after we published the news of Goodman’s death that the artist will be included in a show in New York at MOMA PS1 in Queens called  “Marking Time: Art in the Age of Mass Incarceration.” The pandemic delayed the show’s April opening. No new date has yet been set.

“Ronnie’s artwork is featured in a recent article published in the New York Review of Books about a book for the exhibit: Creation in Confinement: Art in the Age of Mass Incarceration,” wrote Rodgers.  “Both the exhibit at PS1 and the review of the book are both extraordinary achievements, and Ronnie was so proud these last few months of his life about this.”

Already, his work was well-known locally and had been featured in several shows after he was released from prison in 2008. Although homeless, Goodman continued to paint and to show his work. In December 2010, Precita Eyes featured the work he created while spending eight years in prison for burglary. Detail of “Broken Wings” by Ronnie Goodman, from the Precita Eyes Show, December 2010. Detail of “The Art Class” by Ronnie Goodman. From the December 2010 Precita Eyes show.

In 2014, the San Francisco Chronicle ran a story on a campaign that paid for his running shoes and an entry into a half-marathon. And a former student worked on a video that was produced at the time to help Goodman raise money for his run.  It’s a beautiful eulogy with Goodman’s voice.

And as late as 2016, Goodman was included in a group show at the Mission Cultural Center and only recently had completed a mural for Maruya, a Japanese restaurant on 16th Street. 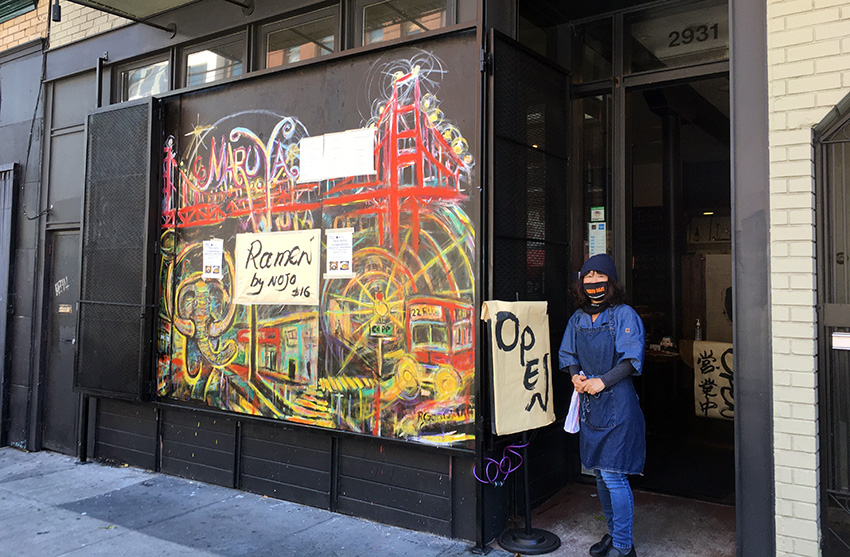 Emiko, the owner in front of her restaurant, Maruya where Ronnie Goodman painted the front mural. Photo by Paula Tejeda.

His son, also named Ronnie Goodman, also a muralist, died at the age of 20 after a Sept.  9, 2014 stabbing at 24th and Capp Streets. After his son’s death, the elder Ronnie Goodman told Mission Local, “I’m taking this pretty tough, here.”

In the last few years, Tejada said, he had made his home around 16th Street, living for a while in the basement of the Redstone Building and then moving to a makeshift sleeping area on Capp Street. 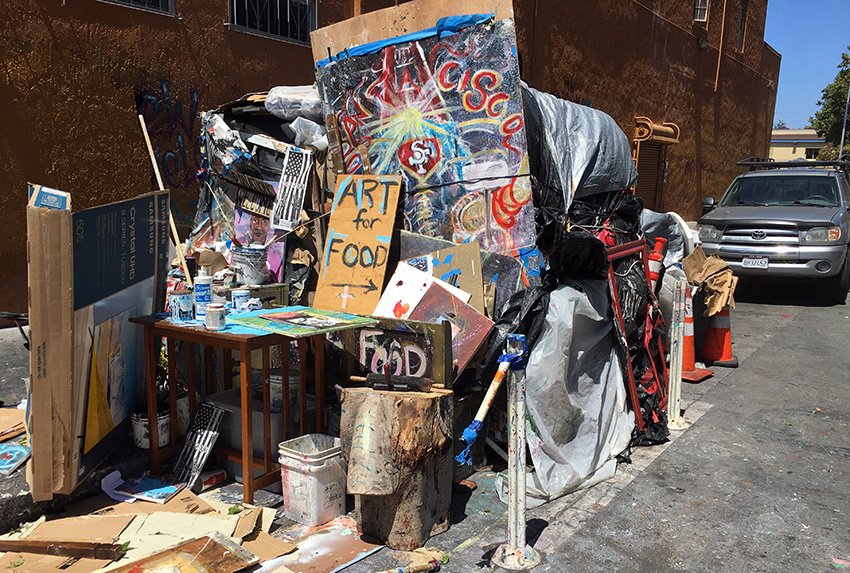 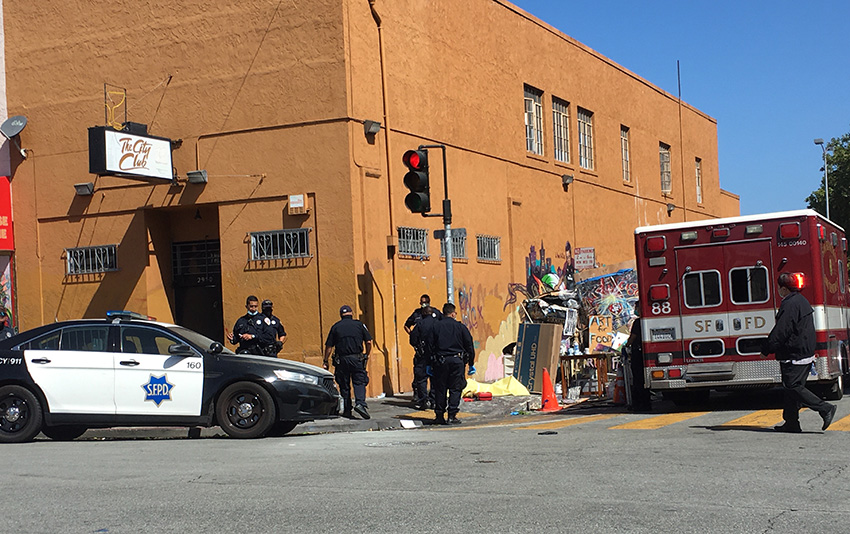 The scene Friday morning at Capp and 16th Streets. Photo by Paula Tejeda