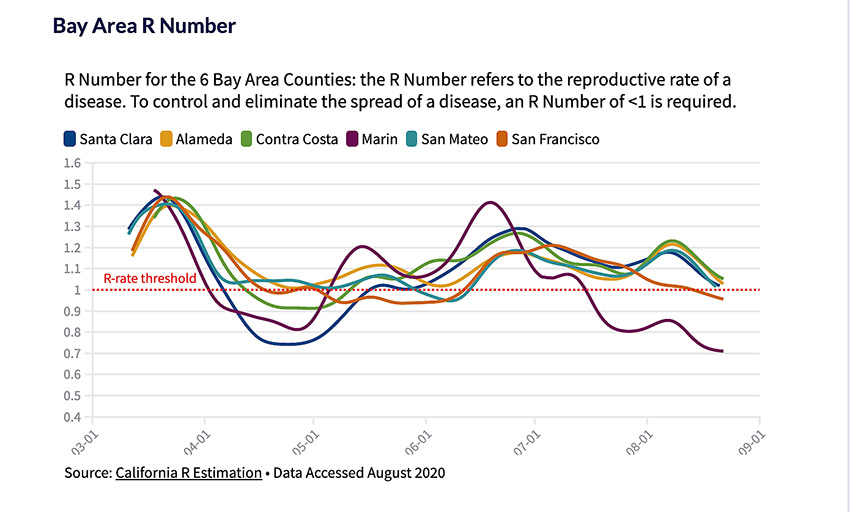 What is it about a picture worth a thousand words? This morning’s New York Times had a picture of huge, jammed, cheek-to-jowl pool rave in Wuhan, China, where the covid first appeared. And no one is wearing a mask! It’s the kind of event we dream about here, where, like characters in an increasingly absurd play, we wait for a vaccine.

While the kids in Wuhan are raving, the kids in SF can’t go to school.  See Joe’s article this morning on the trials and tribulations of local education, as well as a companion piece by Juan Carlos.

As we now understand, current figures are likely to be revised upwards for at least a week. On August 17, the seven-day average of daily cases was 90, a small drop but basically in line where it’s been for the past couple weeks.

In Wuhan, the effective R number is close to 0, while here it is estimated to be slightly below 1. With this kind of R number, meaning each infected person is transmitting the virus to one other, it’s not surprising to see the case numbers stuck on a relatively high plateau, but the trend down is definitely a plus.

Hospitalizations fall back to 100, freeing up more hospital beds. As of Saturday, 99 ICU beds, and 387 Acute Care beds were available.

The positivity rate, reflecting in part more widespread testing, has not been this low since July 3.

DPH has begun reporting sexual orientation for cases. 55 percent of cases reported as of August 21 were heterosexual, while approximately only 5 percent were gay, lesbian, bi or other. Note that 40 percent were unknown or declined to state, and .1 percent was “unsure”.

We now have numbers on the sexual orientation of the dead as well. 23.1 percent were heterosexual, while approximately 5 percent were gay, lesbian or other. Most, 71.8 percent, were unknown.