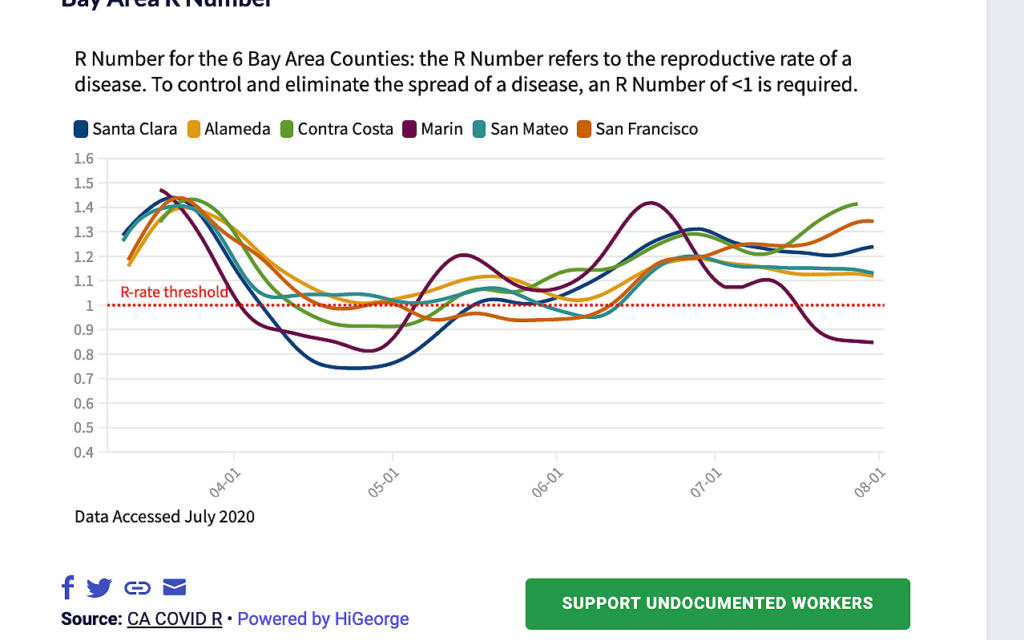 On Friday I got several emails from SF Open Data stating that the Hospital Capacity data was up to date. It was not, and still has not been updated since July 21. Were these emails a Russian disiniformation campaign? Macedonian hackers?

Since the Trump Maladministration took over the hospital capacity data nationwide, San Francisco is not the only county or state that has stalled in reporting capacity and availability numbers. Hospitals now report directly to a new system that NPR reports is  “rife with inconsistencies and errors .” San Francisco has so far been unable to verify data to substantiate Public Health Director Grant Colfax’ warning of local hospitals being overwhelmed in the near future.

The SF Department of Public Health is now reporting recent patient numbers. As of August 1, DPH reports a drop from 36 to 32 patients in ICU and from 79 to 68 in Acute Care.  The rate of weekly change in COVID-19 patients for the week ending August 1 reportedly dropped to 4 percent, the lowest it’s been since June 26.  This figure is well within the DPH goal of no more than a 10 percent weekly increase.

Of concern is the “percentage of essential PPE categories with at least a 30-day supply” which remains frozen at 89 percent. It’s been there for almost all of the past two months, an unexplained condition warranting a “low-alert” status.

If you’re wondering about corruption, Mission Local has a new report today in our latest corruption saga starring Mohammed Nuru and the Department of Public Works.

Only 9 new cases were added to Mission totals, bringing us up to 978.

On July 27, the seven-day average of daily new cases was 93.7. Because of delays in analyzing and reporting test results, you have to go back at least that far to get a “more reliable” picture of what’s happening. The number continues to fall since the peak on July 19, but not by much.

Again, the delays involved with obtaining test results oblige us to backtrack to July 27 for a reliable figure. The seven day average for tests coming back positive on July 27 was 3.86 percent. Again a slight improvement.

Our source for the R number estimate continues to show San Francisco above 1.3. Not good. This estimate, along with others I’ve seen, confirms the virus continues its local spread at a healthy clip. San Francisco lies at the upper end of California counties. The R number for the state is estimated at 1.06 which suggests the virus may be stabilizing around the state for the time being.

Over 80 percent of positive cases in the city are persons of color, with the Latinx population continuing to account for 50 percent. By ramping up its testing in the Mission, and providing services to those who test positive, the City is finally taking the necessary steps to control and reduce transmission of the virus.