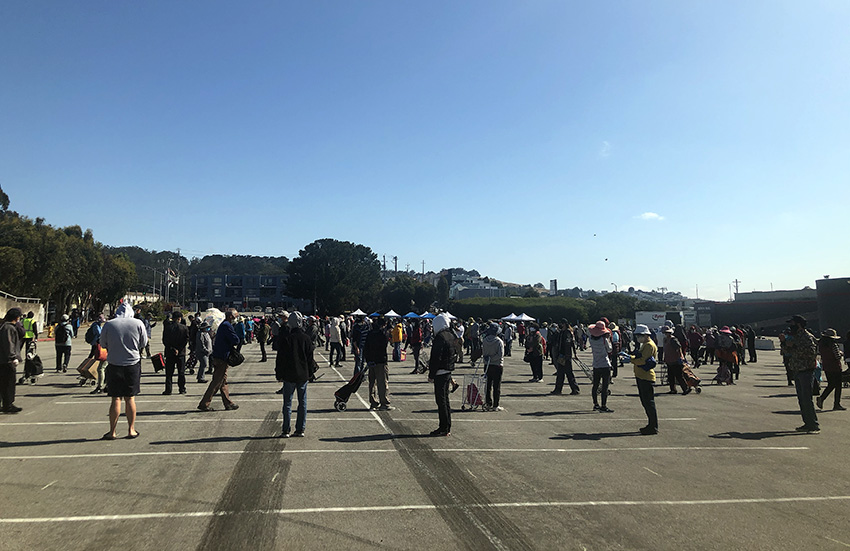 Once the venue for massive shows featuring everything from wrestling to rodeos, nowadays the Cow Palace in Daly City plays host to one of the largest food bank sites for the San Francisco-Marin Food Bank. Some 1,200 to 1,500 residents from San Francisco and San Mateo County line up every Friday from 9 a.m. to 1 p.m.

Towing baskets and carts waiting to be filled, the needy inch slowly up and around, a large coil snaking in on itself.

Regulars understand the line’s system, said Ellen Garcia, a manager for the pop-up program. “But sometimes folks don’t, and then they get frustrated with each other, and we have to pick them apart and make a line.”

Here are a handful of stories from the line.

Rian Calilung is one of the first people to arrive every Friday, sometimes showing up as early as 7 a.m.

She’s fortunate, she says, to still be working as an aircraft cleaner at the San Francisco International Airport. These days, there aren’t as many planes coming in, and a lot of recent hires were laid off during the pandemic. Her eight-year tenure gives her seniority, but still, her shift hours have been reduced by more than half.

During the graveyard shift,  the airport is nearly empty, she says.  Before cleaners even step foot onto the plane, the interior is fogged with disinfectant. Then, Calilung and the other cleaners get to work, masked and gloved. They never know where an aircraft is flying in from, she says.

Cleaning each plane now takes nearly twice as long as it did before –  two to three hours –  since they have to take extra care cleaning small details. “We do everything,” she said, including wiping down every handle and window shade.

When she gets home in the early hours of the morning, she goes directly to bed, but wakes up briefly to cook breakfast for her 12-year-old son and her husband, who works at a healthcare facility for the elderly. Once they’re all fed, she goes back to bed. “I would rather go to sleep than do something,” she said.

Distance learning was hard for her son this past semester. “He misses the activity at school,” she said. But he’s good at math, and an honors student. “I’m lucky,” she chuckled.

Samuel Hernandez lives just five blocks away from the Cow Palace. He has been tested for the virus twice now, most recently on Thursday. One of his neighbors tested positive a month ago, and Hernandez took his wife and two teenage children over to Zuckerberg San Francisco General Hospital for tests. “Just for safety,” he said. Their results all came back negative.

But the neighbor who tested positive didn’t quarantine herself immediately. Hernandez watched as she kept walking around the building, without a mask, or gloves. Finally, he called 311 to let officials know that there was someone in his building with the virus, risking possible exposure to others. The next day, cleaners arrived to disinfect the building.

But the woman, he said, still walked around the building, and he eventually confronted her about it. Soon after that, she quarantined in her apartment and he got tested again

His wife, who is a cleaner, has worked for 18 years at the same group of apartments in San Bruno. It’s tough now. To stay safe, she wears gloves and a mask, and she only works a few days a week, he said.

The pandemic has been hardest on his children, who are 15 and 18 years old.

“They like to go out,” he said. But now they stay home all the time. “When I am home, I try to talk with them, I try to do some games,” said Hernandez. “I try to keep them focused on school, but at the same time, distract (them).”

When Hernandez returns home from his four to five hours a night working delivery for Domino’s Pizza, his eldest daughter is often still awake. “They can’t sleep.”

Peggy Kkie first saw the Cow Palace line while out doing her morning exercises each week. She lives nearby and, as she would jog past the crowd of people, her curiosity piqued. Last week was the Bolivian international student’s first time in the line.

Going online last semester didn’t bother her much. “It gives me more time, more flexibility,” she said. But she sometimes gets distracted working on assignments from home. She lives with her aunt and her cousin, and the apartment can be noisy.

“I can do my homework faster when I get to school,” she said. “There’s more pressure to focus on something.” She especially misses being able to use the school library, “It’s very big, very quiet,” she said.

She’s taking two online classes this summer, and her classes will be online again in the fall. Most likely, she’s not going to become an interior designer. Instead, she thinks being a teacher would be a better fit. “I like teaching people,” she said. Especially Spanish, since that’s her mother language.

Kkie gets to talk to her parents back in Bolivia about three times a week using WeChat, a messaging and social media app. She worries about their safety during the pandemic. Every month the quarantine restrictions seem to change, she said. “Sometimes they (her parents) cannot get out.”

She also worries, because “in Latin America, the health services are not as good as here,” she said.

Ines Hernandez lives a couple of blocks away from the food line. Before the pandemic, she’d worked nearly seven days a week as a housekeeper in a San Francisco house for the past 20 years.

For the first time in 20 years. she hasn’t worked for three months except for the occasional few hours of work cleaning a house or two to get money for groceries. But she said she’s usually able to stretch the food she gets at the food bank to last the week.

Her husband sometimes finds work too, as a roofer. Between them, they’re barely scraping by.

She lives with her husband and her two adult children. Her daughter, 25, teaches kindergarten. Her son, 28, worked as a streetcar conductor in San Francisco until he caught the virus a month or so ago. He’s been sick since, and spent time in the hospital before returning home.

“Now it’s okay, now it’s better,” she said. The fever and his headaches have improved. Right now it’s more like “a little cold,” she said.

It wasn’t difficult taking care of him. But it was scary for her and her family. “Too many people have died from the virus,” she said.

Since then, he’s stayed at home. They get tested every two weeks at the Embarcadero site.

It’s been hard not getting to see her friends, see any other people. To pass the time, she likes to read history books about Mexico, where she’s from. She also cleans her house. “Too many times,” she says with a laugh.