The San Francisco Police Officers Association said Friday it was ready to “take the most aggressive legal position possible” in response to the Police Commission decision barring the police union from weighing in before it passed a new use-of-force policy.

The policy in question bars officers from using their knees to restrain citizens by the neck, on which the Police Commission explicitly declined to “meet-and-confer” with the POA.

“This morning I instructed our attorneys to assess all legal options and take the most aggressive legal position possible in terms of responding to the Police Commission’s disrespectful treatment of the Police Department and our members,” wrote Tony Montoya, the president of the union, in a Friday morning email to officers.

“Sometimes it needs to be litigated,” Commissioner Cindy Elias said. “The City Attorney needs to defend us when we feel that, look, it’s a policy decision; it’s not subject to meet and confer — and we have to take that stand and allow the litigation process to take place and not be scared of it.”

The action revolves around a policy introduced by Chief Bill Scott that now bans officers from using their bodies (including their knees) and other tools while restraining a person’s head, neck or throat — except in emergency situations when an officer fears for their safety and the safety of others. It also reminds officers that they should “intervene” if they see a fellow officer using excessive force.

The Department of Human resources recommended a “meet and confer” process with the POA before it officially became policy, but the Police Commission’s Wednesday vote turned down that recommendation.

“The POA had every opportunity to weigh in on the policy during the meeting, just like any other public commenter,” said Commissioner John Hamasaki in an email on Friday in response to the POA’s letter. “The Police Commission, not the department, and not the POA, enacts the policy and we will not be meeting and conferring on any policy decisions that fall squarely within managerial prerogatives.”

“If the POA can identify impacts or effects of the policy on their members’ working conditions,” he continued, “we will consider whether those rise to the level that requires meet and confer under the current state of the law.”

It was clear before the Wednesday vote that commissioners were frustrated with the union and its belief that it has the right to tinker with almost every policy the Police Commission ends up considering.

In the past, the union has held policies in a meet and confer process indefinitely. On Wednesday, Commissioner Petra DeJesus called this type of procedure a “black hole.”

The move could mirror the last time the Police Commission revised the use of force policy. In December 2016, the commission voted unanimously to pass that revision after months of talks with the union in the meet and confer process stalled.

The union sued and lost months later, and then again lost on appeal in September 2018. The ruling said the commission does not need to meet and confer over managerial decisions or policy changes unless they deal with training and discipline.

The POA’s threat may be a harbinger of renewed legal action — and a carbon copy of the previous battle, which it lost. Or it may not.

John Crew, a former American Civil Liberties Union attorney and policing expert, said that Montoya’s letter does not necessarily mean the union is suing. “That’s not a threat to sue — it’s a rattling of swords,” he said. “This is typical POA, ‘I gotta look tough for my membership’ talk.” 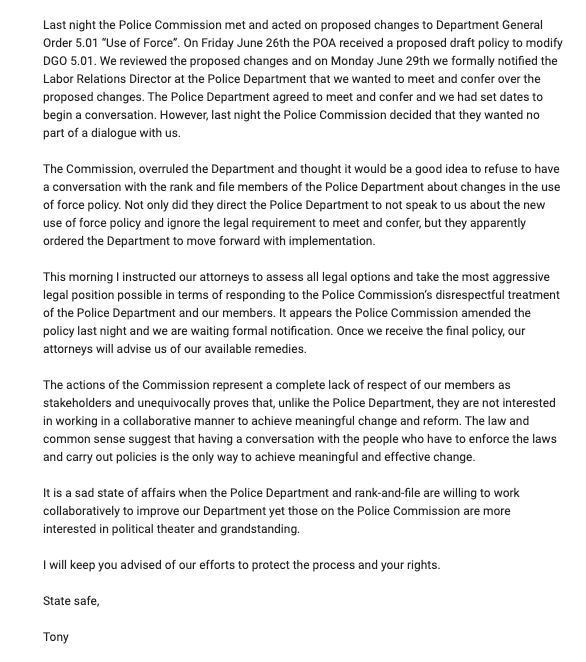 Screenshot of an email sent by POA President Tony Montoya to union members on July 3, 2020.