San Francisco’s reopening will stop until its vitals get better 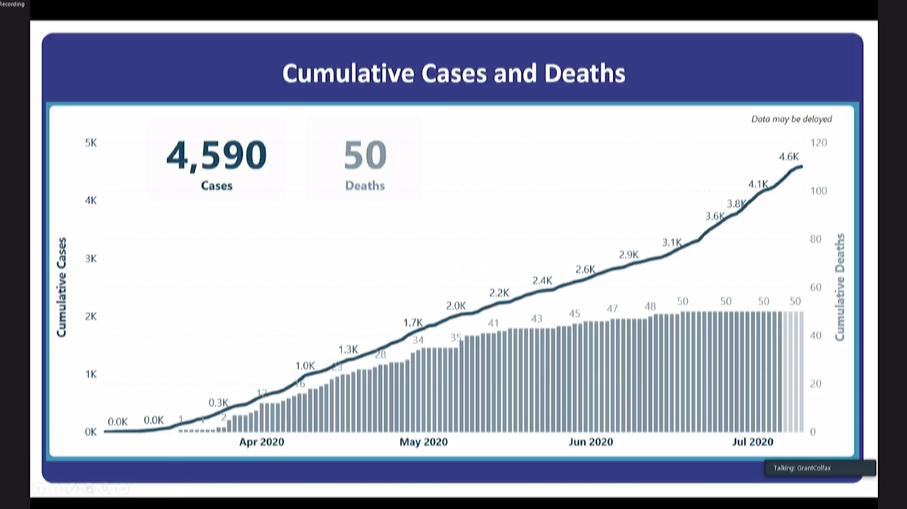 Screenshot of Dr. Colfax’s presentation showing the cumulative deaths and positive cases in the city

The death rate has leveled off and the current tally is at 50.

“But unfortunately, this could change at any moment,” said Colfax. “Especially if our health care systems get overwhelmed and people are not able to get the clinical, medical attention that they need.”

That possibility has stopped the city’s reopening indefinitely, the officials said. And, it was clear there would be no resuming until they saw better numbers on cases, hospitalizations and transmission rates.

Colfax said hospitalizations have increased recently and the rate of positive cases per 100,000 people has increased to about 7.8 as of July 11.

“This indicates that the virus is spreading throughout the city,” said Colfax.

The reproductive number of the virus – how fast the virus is transmitting through the population – has grown as well. In May it had dropped to about 0.85, which meant that for every person infected, less than one more new person would be infected. “If that had stayed, the virus would have basically burned out in the city,” said Colfax.

But in early June, soon after some level of reopening began, that number started to increase. And as of July 4, the reproductive rate of the virus in the city was estimated at 1.25 according to researchers at UC Berkeley. That number could dramatically increase the number of hospitalizations to 830. If it stays that high, deaths could go to 890 or more by the end of 2020.

Cutting the rate by half would decrease the hospitalization and death projections to hundreds less, Colfax said.

Along with pausing the reopening, Colfax stressed the importance of sticking to social distancing, not interacting with people outside of one’s immediate household, wearing masks and paying attention to hygiene. Gatherings of large groups, particularly in enclosed spaces, should be avoided.

While testing has expanded, it’s clear that more is needed, he said.

In the last week, the number of tests being conducted has increased from the original goal of 1,800 a day to 2,600 a day, said Colfax. On average, three percent of those being tested are positive.

Breed asked what the Department of Public Health was doing to address this inequity.

Colfax said that they have been working with the Latino Task Force on COVID-19 on how to address these unique challenges to increase testing and to ensure that when people do test positive they have access to financial and other support.

Breed pointed out that besides pop-up testing sites, most are concentrated in the center of the city. Colfax said that the Department of Public Health has been working on expanding testing sites in Sunnydale, Potrero Hill, and just started testing at a new site in the Mission District.

That popup opened last Thursday, expecting 100 people and ended up testing 200. “We’ve got to take the testing to where people are,” said Breed.

Colfax said the testing of a new vaccine will start in August at the Department of Public Health.

But the development could take a long time, and will most likely not be widely available for another 12 to 18 months.

Until then, and to prevent another surge in cases, people and businesses will have to continue on with shelter-in-place in order to save lives, said Colfax.