Samara Marion, ‘heart and soul of police reform,’ to retire from SF Department of Police Accountability 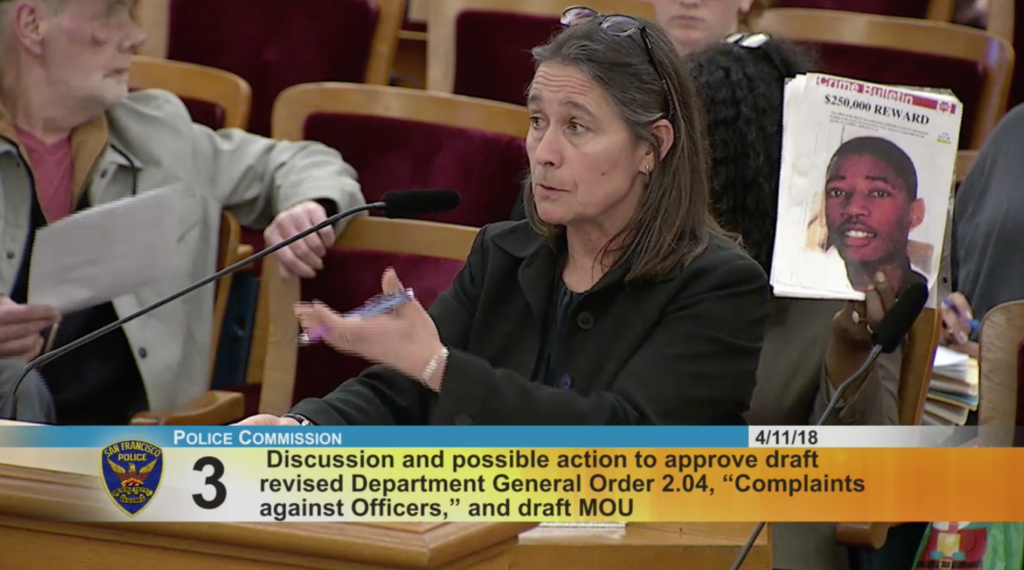 Samara Marion presents on a policy dealing with citizen complaints against police officers on April 11, 2018.

San Francisco’s government will lose one of its fiercest and most effective police reform advocates at the end of the month, leaving a major hole in expertise and initiative for change.

Samara Marion, the policy director at the Department of Police Accountability, announced her retirement from the agency at last Wednesday’s Police Commission meeting — news that jarred the commissioners and kicked off a lengthy valediction marked by unanimous lament.

Marion said she’s worked at the Office of Citizen Complaints, which became the Department of Police Accountability in 2016, for some 20 years. Even a cursory glance at city records shows that Marion’s fingerprints are on almost every major San Francisco Police Department policy reform, including use-of-force, bias-free policing, officer discipline, and language access. She highlighted the negative interplay between mental illness and police shootings long before the department mandated crisis intervention training.

“Samara Marion has been the heart and soul of police reform in San Francisco,” said Commissioner John Hamasaki. “And that’s been the case for many, many years.”

Five of those hours were spent negotiating the first paragraph of the policy, which made its language more “restrictive” than the Graham v. Connor constitutional standard that has allowed officers to use deadly force in America with near impunity.

This policy is said to have inspired AB 392, which limits the use of deadly force by police statewide.

Marion was also instrumental in forming the SFPD’s forthcoming “Bias-Free Policing” and “Investigative Detentions” policies. During its reporting on these policies, Mission Local often observed Marion fighting fiercely for more transparency in the reform process — and to take those policies further than SFPD higher-ups were comfortable with.

“You’ve made us better, and your legacy will live through the policies that you were instrumental in — the many policies that you were instrumental in,” Chief Bill Scott told Marion at last Wednesday’s meeting. “You really caused us to look inwardly, and some of the systems that we now have in place that will make our work easier, quicker, faster, more efficient are because of you. And because of you pushing us.”

Marion has also helped to form policies around domestic violence, sexual assault, policing of youth, mental illness, and language access. She helped to form a policy that helps to protect Deaf individuals from unfair policing, a two-year process that took far too long but was approved at last Wednesday’s meeting. “There’s no better send-off for me,” Marion said of the unanimous vote to pass the policy.

Commissioner Cindy Elias joked that Scott should hire Marion to “really get the reforms moving” — reforms that have dragged on for years. “Sometimes you’ve got to bring them in-house to get it done,” Elias said.

Vice President Damali Taylor said she was “shocked” by the news of Marion’s retirement, and called her “legendary.”

Paul Henderson, the executive director of the Department of Police Accountability, called Marion his “secret weapon.”

“So that is going to be a huge loss for this agency,” Henderson said. And “this agency is not the only one that relies on her expertise, her guidance, her input and her breadth of knowledge for anything and everything as it relates to policy.”

Before joining the DPA, Marion was a Santa Cruz County Public Defender for 15 years and an educator at Santa Clara University School of Law and Stanford Law School, according to a resolution passed by the Commission on the Status of Women in October 2019, honoring Marion’s achievements.

And, now, Marion said she does not know what the future holds. “I’m most certainly committed to police reform,” she told the commission. “And so I hope there will be opportunities in the future that I’ll get to continue this work.”

First, she said, will take some time to visit her young daughter in Canada, who she has not seen in six months.

However, many at the meeting did not believe Marion could stay away too long, given her passion. Scott remarked: “I have a sneaking feeling that we have not seen the last of Ms. Marion.”