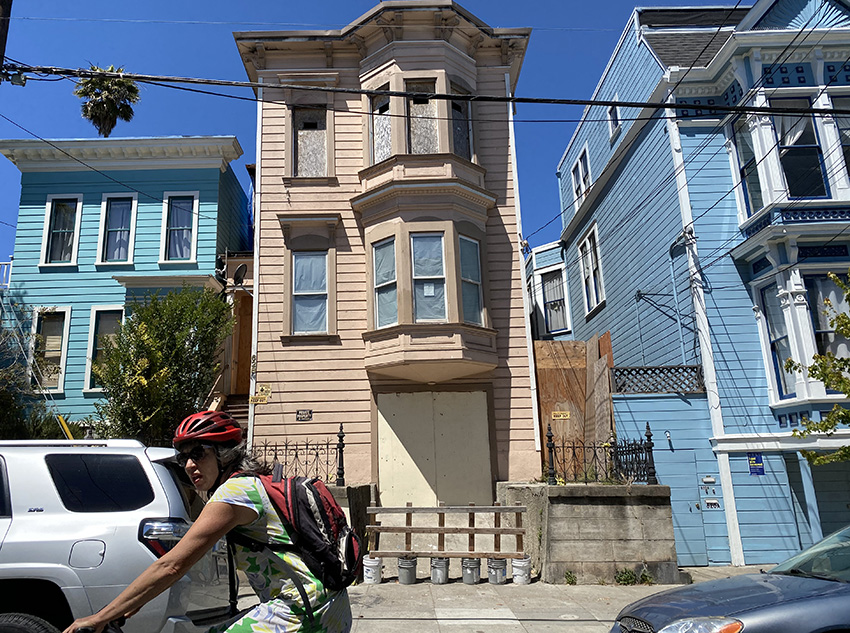 San Francisco real estate developers Mel Murphy, Luke O’Brien and James Kavanaugh are in the process of converting a residential board-and-care facility into a duplex, according to city documents.

Up until a fire in August 2015, 628 Shotwell St. operated as a residential facility for six adults. The proposed change of use would eliminate the possibility of reopening the building as a board-and-care facility.

It’s a loss to the city’s stock of board-and-care facilities “that should have never happened,” said Sara Shortt, director of public policy and community organizing at the Community Housing Partnership. The city, she said, should have stepped in to purchase the property or located another property where it could at least replace that facility. “Any of these properties we lose right now means a net loss in resources for extremely low-income people with behavioral health issues.”

The city appears to have done little to mitigate the loss. The Shotwell property sat vacant for close to four years before Murphy, his wife Nuannoi, O’Brien, Tanwaratna O’Brien, and Kavanaugh scooped it up on March 28, 2019, for $1.35 million, city records show. Though Kavanaugh is not listed directly on the deed, a limited liability company he is the sole manager of, 460 Natoma LLC, is.

These are the types of purchases Mayor London Breed and three supervisors hoped to limit with a plan they announced in September 2019 to stop the mass closures of board-and-care facilities, which dropped from 1,000 in 2012 to around 600 today.  The facilities provide stable housing for elderly, formerly homeless, mentally ill, and drug addicted people. They have run into increasing financial difficulties and often end up on the real estate market.

Breed’s plan increased city subsidies for board-and-care facilities from $22 a night to $35 a night, required would-be conversions to get a special permit known as conditional-use authorization, and urged the city to buy more of these properties when they go on the market.

But, so far, that has proved ineffective.

“What’s happening now, it seems, is that the city is going about their business and if they happen to hear about a care home at risk or they get a state official notice, they will see what they can do at that time,” Shortt said, noting that board-and-cares are often at risk long before the city hears about it. “If the city were aggressively monitoring the situation and having these ongoing conversations with all of the stakeholders, we think they could do a much better job of hopefully preventing closures to begin with.”

As for preventing conversions to residential housing, the conditional use authorization hasn’t appeared to be a barrier for the Shotwell property yet.

Murphy, O’Brien, and Kavanaugh are in the process of applying for the permit after their required pre-application meeting on Zoom on July 2, which had one community attendee — this reporter. To get approval to transition the former board-and-care into residential housing, the owners must provide documentation of compatibility with the neighborhood to the Planning Department, followed by a Planning Commission hearing.

The public hearing will determine “if the proposed use is necessary or desirable to the neighborhood, whether it may potentially have a negative effect on the surrounding neighborhood, and whether the use complies with the San Francisco General Plan,” per the San Francisco Planning Department. The hearing has not been scheduled yet.

It is unclear how the Planning Commissioners will view the past dealings of some of the owners. Two of the current Shotwell owners were previously accused of violating state and city housing law and engaging in “unlawful, unfair, and/or fraudulent” business practices with several of their residential properties. Murphy, who served on San Francisco’s Building Inspection Commission from 2006 to 2012, and his wife faced a civil lawsuit in April, 2015, for allegedly converting a property they owned from a two-unit to a four-unit residence without permits, failing to follow building permits for another property that partially collapsed, and other allegations. Murphy and his wife denied several of the allegations, and the suit was settled in December 2018.

Further investigation into the proposed board-and-care conversion and ensuing home remodel reveals a lack of transparency on behalf of the building’s owners.

Project details failed to mention the proposed change of use, an omission that city planner Claire Feeney noted. In her second response to Thomas’ project application on March 23, Feeney requested that Thomas submit pre-application and conditional use authorization materials to comply with the new board-and-care removal code.

In the pre-application Zoom meeting for neighbors to learn about the project on July 2, Thomas did not disclose the property owners’ names when asked twice, only stating that there were three individuals operating under the name 628 Shotwell LLC. O’Brien and Kavanaugh, who were on the Zoom call at the time, remained silent. O’Brien and Murphy could not be reached at their real estate office after several attempts to speak with them.

The proposed Shotwell remodel would replace existing fire-damaged features in the building’s interior and convert a floor previously used for storage and parking into a one-bedroom unit that includes a bathroom, kitchen and living room. Other changes include the addition of a deck and spiral staircase, as well as new landscaping and paving to bring the land up to code.

The loss of board-and-care facilitiess in San Francisco dominated headlines before being squeezed out of the mainstream news cycle by COVID-19.

“This is the kind of thing that may get pushed aside during a large-scale crisis such as the coronavirus, but it is actually all the more important that it continue to be front and center on the city’s radar. More vulnerable people on the streets during the coronavirus pandemic is the last thing we want to see,” Shortt said.