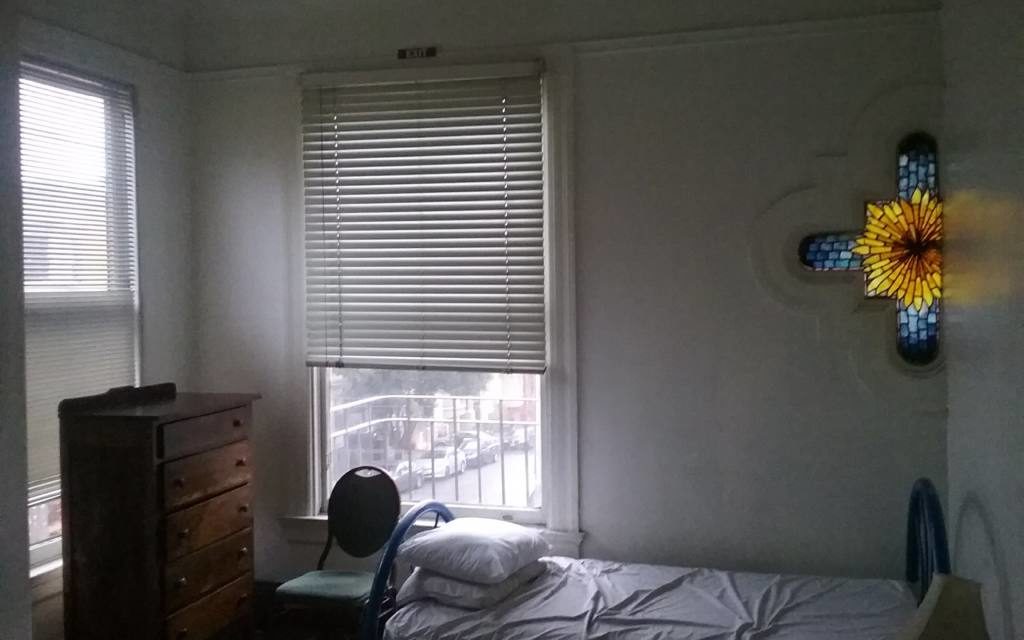 A bedroom sits unoccupied at the Parkview Inn, a board and care facility teetering on the brink of closure. Photo by Joe Eskenazi

“That’s my husband there,” says Dellie Punla, with a subtle nod of her head. Eyes turn toward the door, but no man materializes. “Fifty-seven years married!” Punla continues. “That is him — when he is healthy.”

It was a photo on the wall of a grinning Achelle Punla in a white shirt. The wall is here at the Parkview Inn, a board-and-care facility housing mentally ill senior citizens that the Punlas bought back in 1983. Last year, however, they announced that it was no longer financially viable, and moved to close it. And, this month, Achelle died.

Now there’s a for-sale sign planted out front on the corner of Haight and Buena Vista West, across the street from Buena Vista Park (they don’t call it the “Parkview” for nothing). Listing agent Shianne Kurkina confirms that she hopes to get $7 million for this stately, 115-year-old mansion and its adjoining “annex” facility — which are licensed by the state to house up to 35 residents.

“We are working closely with a gentleman from the Department of Public Health,” Kurkina confirms. “The city will most likely submit an offer.”

When asked how much longer she can keep the doors open here, Dellie Punla says a month, perhaps. She’s already extended her deadline to close three times. Down from the state limit of 20 residents, only five people still live in the main building at 969 Buena Vista West (15 reside at the adjoining “annex,” both of which are for sale).

Rooms sit empty in the midst of a homeless crisis. The five people remaining here are, in Punla’s words, “hard clients. People don’t like to take hard clients — but I don’t want them to stay on the street.”

Punla led members of the media, government and nonprofits through her largely empty home Tuesday afternoon; it was a tour meant, overtly, to ratchet up pressure on the city to step up efforts to preserve its dwindling board-and-care stock in the midst of both a homeless crisis and a real-estate crisis.

“It is,” said Sara Shortt of the Community Housing Partnership, “the perfect storm.”

A storm was, in fact, whipping up outside, but this was metaphorical: Affordability issues are making board-and-care facilities more and more difficult to staff and run; parodic real-estate values are making the structures housing them damn-near worth their weight in gold (but not to house the aging mentally ill); and, all the while, San Francisco’s homeless residents languish out-of-doors, even while facilities meant to house them sit largely vacant and unused.

Department of Public Health officials noted that, of 19 people residing here, 14 have been relocated (the five “hard clients” remain for now). Many are still in San Francisco. But not all, and Jennifer Esteen, a psychiatric nurse and member of the DPH transitions placement team, said some former residents are now “very far” from the city.

Talks are ongoing to buy or lease this site, as well as South Van Ness Manor, which was slated to close on Nov. 30. But Esteen, Shortt, and District 5 Supervisor Dean Preston today urged a more urgent and proactive effort to monitor board-and-cares teetering on the brink of closure and swoop in and buy or lease the properties.

“We need to be preserving this housing, rather than just relocating the residents,” Short said.

That effort was staved off after extreme pushback. Mission Local revealed that some 45 beds were being willfully kept empty on-site, even while staff was falsely told this was due to a state-imposed “probation.” Esteen says some 20 beds are still unfilled at the Behavioral Health Center. The city, she continued, recently signed a deal that will allow placement of its needy mentally ill residents in facilities as far off as Los Angeles. This is an arrangement she considers cruel to residents who may have been born here and resided in San Francisco facilities for decades — as well as costlier than working with local homes like the Parkview Inn.

Other city moves, however, appear to be having their intended effect.

A 2019 resolution from Supervisors Rafael Mandelman and Norman Yee restricts the permissible uses for a board-and-care facility after it is sold, and also imposes time restrictions. The listing agent Kurkina complains this reduced the value of the building drastically. “The city is making it impossible,” she says. With restrictions limiting uses on-site “Nobody in his right mind is going to put $7 million on this.”

This, again, seems to be the intended effect of the legislation; the city or some other entity that will continue housing indigent and mentally ill residents is now more likely to obtain this site.

The clock, however, is still ticking. Dellie Punla’s patience and finances are not inexhaustible. When asked why she’s held on this long, she replies “My wish is to keep these people around.”

City officials she’s spoken with in the recent past, however, gave her the impression they want to buy bigger buildings than hers.

“If no one buys this place,” she says, “I can maybe start a [adult] daycare. Eight hours, no kitchen, and then we go home at the end of the day.”