The photo on the left, from a 2005 lawsuit, allegedly depicts a stolen police ‘koban’ sitting in Walter Wong’s Mission District parking lot. The photo on the right was taken at the same site on July 13, 2020.

Most of you probably remember when people had cameras and those cameras had film. But kobans? Maybe not.

A koban is, in a word, a box. Mayor Dianne Feinstein saw them on an official trip to Japan — and, when one of her lieutenants’ purses was officially stolen, that woman was able to conveniently file an official report with the Japanese cop stationed in the Volkswagen Bus-sized structure.

And, in yet another instance of a globetrotting mayor blithely importing worldwide amenities to San Francisco — with oft-dubious results — there were soon a handful of kobans dotting the city, including one on 16th and Mission.

The notion of a cop reliably on-site to handle the needs of the community — often the Chinese- or Spanish-speaking community — was, at the time, portrayed as the latest and greatest development in that transcendent concept of “community policing.”

It’s a solid enough idea, in concept. In practice, however, it didn’t work out so well.

On the former 16th and Mission koban site there now sits a JCDecaux toilet. It is, sadly, serving much the same purpose.

“It became a urinal,” recalls retired police captain Al Casciato, who was a lieutenant at Mission Station when the koban was installed; he was later a Mission captain. “The koban blocked the vision of people driving by. So you could go take a piss in the back. And it wasn’t a sealed building, so the urine ran underneath.”

San Francisco is always quick to grab onto shiny new things. But, in many ways, this city remains a stagnant and change-averse place.

More than three decades later, the notion of “community policing” — and, more elementally, just what the hell police should do — is more relevant than ever in San Francisco. But the kobans are now as relevant as photo-processing booths.

So, that reveals something about San Francisco’s attention span, and its commitment to change — versus the entrenched power of the status quo.

But what may reveal even more about this city is where the kobans ended up: hidden in plain sight, for years, in the Mission District parking lot of admitted fraudster and money-launderer Walter Wong, the avatar of San Francisco’s culture of corruption — and the apparent keystone in the feds’ ongoing probe of San Francisco. 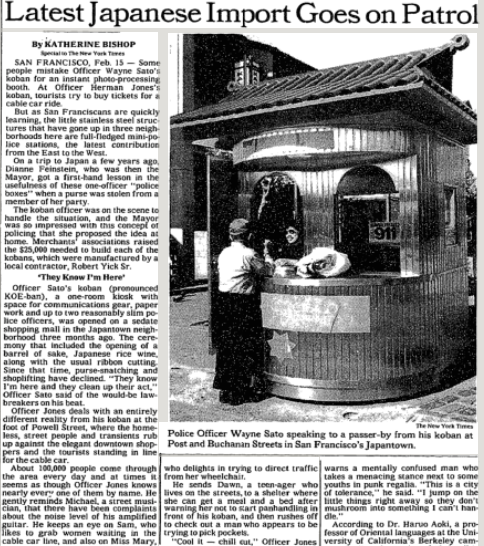 In that long-ago Times story, a UC Berkeley linguist explained that, in Japanese, the first syllable of “koban” can mean “to take turns,” while the second syllable could mean “guard.” So, it means “a place to take turns watching.”

It’s complicated. We may never know the true etymology. And we also may never know the complicated story of just how not one but two — and, Lord knows, maybe more — kobans came to rest next to the idyllic koi pond in the parking lot behind Walter Wong’s hulking Mission and 13th CitiCenter building.

It’s peaceful here. The stream trickles down a rock waterfall, the oversize fish ripple the surface and, during the city’s COVID-induced sclerosis, the automotive noise emanating from the nearby elevated highway is minimal.

And, next to it all, sits a koban, once San Francisco’s great silver hope for community policing and now a refuge for a parking attendant in a lot owned by the man epitomizing this city’s atmosphere of political incestuousness and malfeasance.

The idea of putting cops, especially bilingual cops, in the community where people could access them is a good one — in theory. But, translating theories into action, there’s a lot more urine involved. And staffing issues. And neglect and internal resistance from the San Francisco Police Department.

Kobans “were always treated as the lowest priority,” says retired sergeant Carl T. “If someone called in sick, that’s where they’d take it out. Cops felt like sitting ducks in there and, also, it was boring. This was before cell phones and cops are not big readers. So, there was not a lot to do.”

When the kobans were left unstaffed — which was not infrequent — they became targets for drug-use, graffiti, urination and vandalism. The San Francisco Police Department washed its hands of them by 2002, by which time policing trends were going in a different — and not altogether more community-friendly — direction.

“After 9-11, the Homeland Security money began to flow to the cities. That’s when [police departments] began buying new bomb squad shit and tanks and machine guns and cops started looking like they’re going to war,” said a retired veteran officer. “So, that might be the end of community policing. Instead, we were gonna fight terrorism on 24th and Mission.”

But the kobans’ adventures weren’t finished. Not yet. 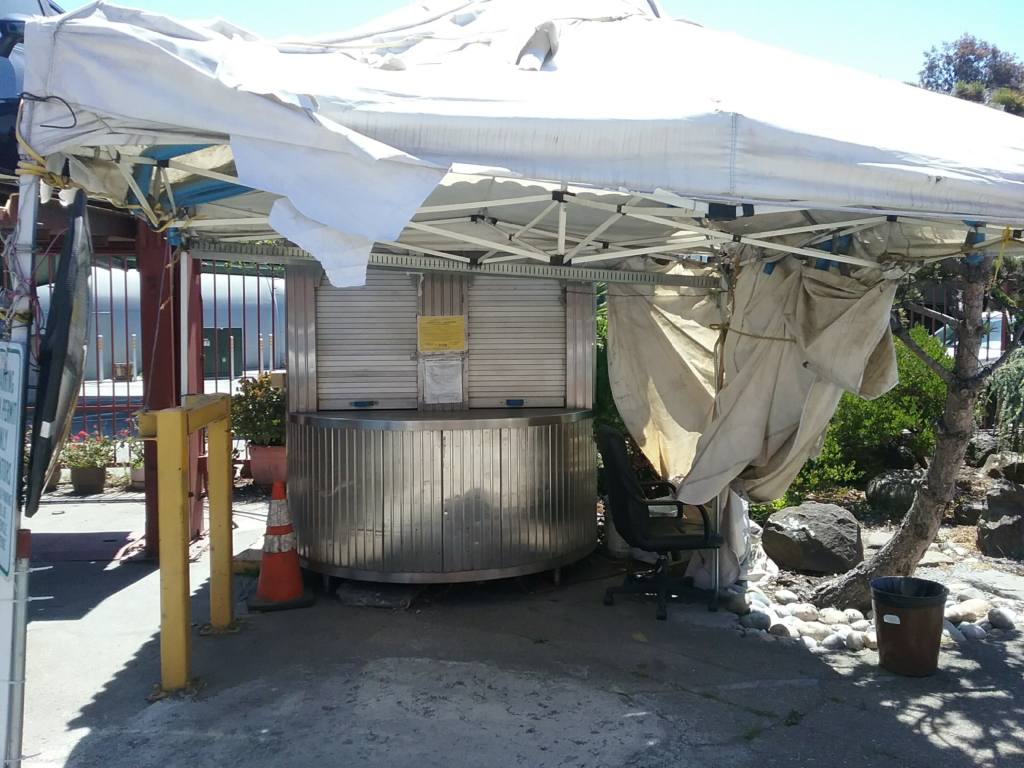 Where is the koban that once stood on Grant Avenue between Jackson and Washington in Chinatown — that, 15 years ago, sparked a cross between a municipal scandal and a Gilbert and Sullivan operetta?

After the police gave up on it, it enjoyed a second life as an information booth where bilingual kids worked summer jobs answering questions and talking to tourists.

In January 2005, the night before it was due to reopen after a refurbishing, it mysteriously vanished.

The Chinese Chamber of Commerce was sued in February 2005 by the Chinese Economic Development Group after it came to light that Rose Pak had ordered the koban’s removal.

Your humble narrator this week e-mailed the Chinese Chamber about the whereabouts of the missing koban. In a reply, we were told that the only person who’d know is “the late Ms. Rose Pak.”

That’s an answer, somehow managing to be simultaneously unsatisfactory and perfect.

Pak was held in contempt of court as a result of that 2005 case. “She owed us around 5,000 bucks,” said attorney Joseph Breall, who represented the plaintiffs, helmed by Pak’s Chinatown rival Pius Lee.

Did his clients get any of that money? “Never.” He laughs. “And Rose never liked me after that.”

Breall also notes that his clients were supposed to get that koban back. But this also never happened. And, magically, the site where it once stood was rezoned and, lo and behold, the necessary permits to place the koban back in its old spot never materialized.

“There was,” the attorney says, “a lot of political pressure to drop that suit.”

There are near-mythical tales of Pak having that koban strapped to a truck and inserted as a float into the Chinese New Year’s parade — an aggressive and typically flamboyant political elbow to the chest of her neighborhood rivals.

But that’s no myth. That happened.

Your humble narrator spoke with multiple individuals who saw it motor past with their own eyes.

“Rose put the so-called missing koban on a flatbed truck. There was nothing but the koban on there, and it was in the midst of all these colorful floats and performers and bands and folk dancers and lion dancers — and there’s the fucking koban!” recalls one longtime city politico.

“This was no pickup truck. It was an 18-wheeler. Can you imagine that going down Kearney? The average person was probably thinking ‘what the hell is that?’ But every insider knew what it was. And was having a laugh.”

A laugh at Pak’s enemies’ expense.

A koban resembling the one purloined from Grant Street photographed in Walter Wong’s lot in 2005 — and, again, in 2017.

But where did that koban end up after its turn as a parade float? Well, in that 2005 lawsuit, blurry black-and-white photographs reveal what, for all the world, seems to be the missing koban in Walter Wong’s Mission District parking lot.

And yet, visiting there only days ago, the koban serving as a parking attendant’s hut appears to be a different koban.

Eyeing the photo accompanying 1988 Times story and this stock photo of Officer Sato and his koban, the object in Wong’s lot appears to be the Japantown koban, not the Chinatown one.

“I’m pretty sure Walter put in the second one to fuck with everyone,” says a longtime city politico.

But you can still find the Chinatown koban on Wong’s property. You just have to look into the past.

Between 2009 and 2017 on Google Street View it’s there, plain as day, on the 13th Street side of his lot — fancy windows, red roof and everything. In 2018 it disappears, replaced by hydraulic car lifts.

Al Casciato, the former Mission captain, sees a parallel to the current existential policing crisis  in all this. Putting a cop with a badge and a gun in a pillbox turned out to not work out so well. “But what if you had a health professional there? Or an Alcoholics Anonymous person?” he ponders.

Carl T. agrees: “That’s what the discussion now is about. We didn’t need an armed person. It could be a community outreach person. We could eliminate 75 percent of what cops do and still be fine.”

Rather than erect boxes on the corner for cops to billet themselves within while people shoot up or piss inches away and out of sight, Casciato wonders why we aren’t activating some of this city’s thousands of vacant storefronts. Get mental health professionals and others in there “to help people negotiate the system. That’s 90 percent of what people need,” he says.

“When people say ‘defund the police,’ it’s a term of protest. But it’s really reprioritizing,” he continues. “Are we prioritizing mental health? Use of drugs? The front-end of the criminal justice system has to have a health component — can I get help?”

The kobans serve as a symbol of the unfulfilled — but not abandoned — promise of not just community policing but whatever it is that may now supplant “policing” in ensuring healthy, functioning communities.

But they’re also one more reminder of how, in this city, any attempts at change can be subverted and co-opted by the powers-that-be — and end up serving them.

It is, in the end, challenging to change San Francisco with a box.

It is, in the end, challenging for San Francisco to think outside of one.