Ice cream diaries: not so Smitten 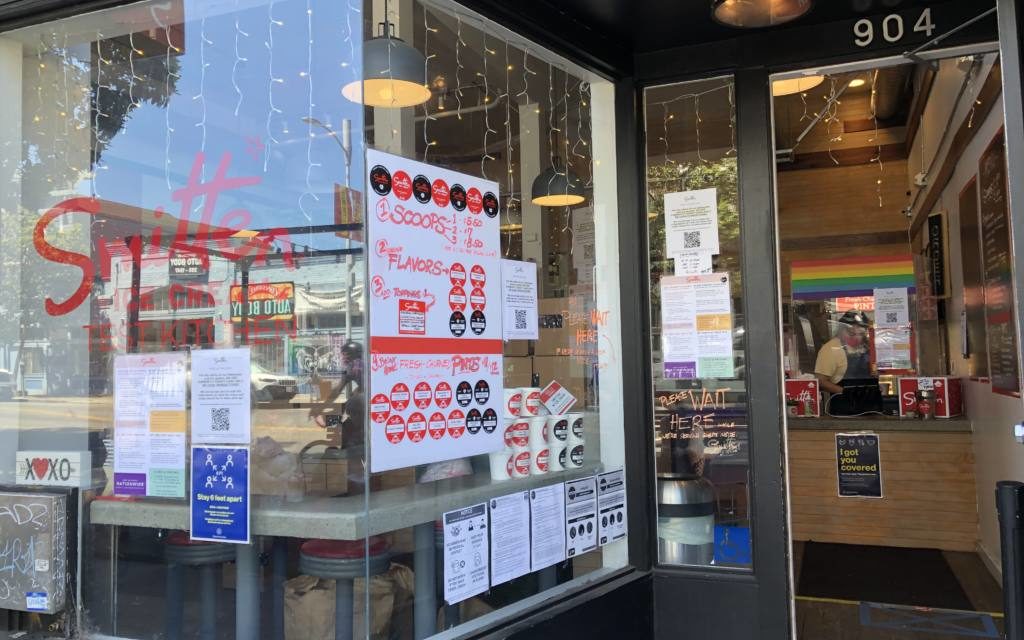 Outside Smitten on Valencia Street

A swing and a miss at Smitten Ice Cream

I’ve grown attuned to the end of the week: my sweet tooth starts acting up and, like clockwork, I get a hankering for ice cream.

Today presented yet another challenge. At the last minute, my colleague became unavailable. Forging ahead on my own, I gravitated to the festive Christmas lights blinking in Smitten Ice Cream’s storefront windows. I always enjoyed their bright red signage, signaling cheer despite the store’s somewhat austere, grey and white interior.

I have only had Smitten’s ice cream once, years ago. I was cajoled by a more adventurous friend into trying a seasonal flavor, sweet corn, topped with a berry compote.

It was surprisingly delicious, and the combination reminded me of cornbread with jam.

What’s most popular now? The young woman behind the counter looked confused. It took far too long for me to realize that she had trouble hearing me over the whirring from their patented ice cream-churning machines.

I repeated the question a little louder and her confusion melted away. Brookies n’ cream topped the list, she guessed, and it was her personal favorite. It’s a sweet cream-based flavor with brownies and chocolate chip cookies blended in.  Some of their other flavors were pretty good, she assured me, like salted caramel or the vegan fresh strawberry.

Some that were worth honorable mention were only offered by the pint, like root beer float or earl grey with milk chocolate chips.

So it was brookies n’ cream for me – single scoop, in a cup. No cone options, sadly.

When my ice cream was handed to me over the clear plastic partition, I was impressed by its aesthetic perfection. 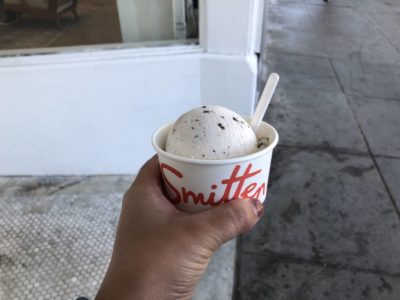 It was a damn good looking scoop.

As I walked outside, I wanted to stop and savor my ice cream, but their small outdoor area had been claimed by two lounging people.

I meandered along until I found a portion of sidewalk where I could social distance and eat my ice cream safely.

In that very first bite, I was underwhelmed. The second onwards, I was disappointed.

Sure, the texture was smooth. That’s what they’re known for.

But the flavor was sweetly generic. I could have been eating a slightly melted scoop of Dreyer’s ice cream from Safeway. I would have paid less for the gallon than I paid for the scoop.

The brownie (chocolate chip cookie?) chunks were barely detectable until they got stuck in my teeth. They tasted oddly salty, and even though I wasn’t sure I actually liked them, I wound up digging for the small pieces in my cup just so I could imbibe something flavorful.

I am sorry to say that once those were gone, I felt mostly obligated to finish the rest.

Here’s hoping for a palate cleanser next week.