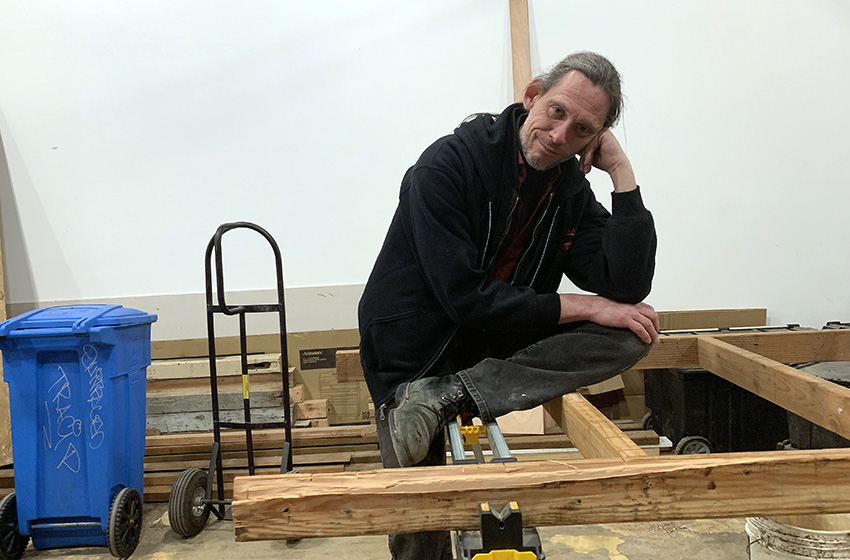 Alan Beatts, owner of Borderlands Books working on his new shop at 1377 Haight St in March 2019. Photo by Lydia Chávez

Former girlfriend alleges she was held at knifepoint

The owner of Borderlands Books, Alan Beatts, is under fire and losing support in the genre fiction community as allegations have been publicly leveled that Beatts attempted to have sex with his daughter in 2012 when she was 19, and that he physically assaulted his ex-girlfriend by knifepoint at a hotel in New Orleans in 2016.

The incidents were thrown into the spotlight during last Thursday’s episode of The Horror Show with Brian Keene, a podcast that features news and discussions with prominent authors in the horror fiction industry.

Borderlands Books, which Beatts founded in 1997, has been a hub in the fiction world of horror, sci-fi and fantasy fiction. Fans came to Beatts’ rescue in 2015 when he raised $30,000 from 300 supporters in less than two days and again in 2017 when 49 individuals loaned him $1.9 million to purchase a new location on Haight Street.

Keene is himself a Borderlands fan who had long gone to book signings at the Valencia Street location. He said the airing of the allegations on his podcast was prompted by fiction author Sarah Read posting an account told by Beatts’ ex-girlfriend on Facebook this month. She tweeted out the post on June 20.

“Friends, my childhood friend is speaking out against a predator in the genre book world,” Read tweeted with a screenshot of her Facebook post, which details the assault allegations made by Beatts’ ex-girlfriend, whom she did not name. Mission Local spoke independently with the ex-girlfriend, who requested anonymity, and she confirmed the allegation.

The post also mentions Beatts’ daughter, “DoveStep” Beatts, who provided both Keene and Mission Local with a written account in which she detailed the alleged 2012 incident.

The two women, whom Mission Local has spoken to, are no longer in contact with Beatts. Beatts’ daughter preferred to go by “DoveStep” Beatts, a name she uses on social media.

Reached by phone, Alan Beatts declined to comment. He said he knew of the allegations that were leveled against him in the podcast, and after being told Mission Local independently contacted the women making the allegations, he said: “I don’t think I want to comment.”

“DoveStep” Beatts, Alan Beatts’ 27-year-old daughter, alleged in a written account she shared with Mission Local that Beatts tried to have sex with her in her apartment on June 24, 2012, following the San Francisco Pride Parade. In the post, Beatts recounts an escalating encounter with her father following a day of heavy drinking. A friend, who asked not to be named, said they were with Alan and his daughter that day, and confirmed that Alan was “really pushing her to drink.”

“If you weren’t my daughter, I would just take you myself and make sure you were okay,” she remembers her father telling her.

The younger Beatts said she understood what he was implying and “felt her stomach drop.” But she brushed it off and her father continued.

“You realize I’m saying that I would want to have sex with you,” he said eventually.

The younger Beatts said she laughed off the comment. When the two of them reached her apartment, “we kissed,” DoveStep wrote. “He came into the apartment with me and we began making out.”

When her father then allegedly led her over to her couch and attempted to take off her clothes,  DoveStep immediately tried to slide away, she wrote. “When his advances didn’t stop, I pushed myself onto the floor,” the younger Beatts wrote. “He came after me, off the couch on hands and knees as I began pushing myself backwards towards the wall.”

With her back against her closet door, she wrote, she held her foot to his shoulder to prevent him from advancing. “Looking into his eyes, I didn’t see Alan anymore,” DoveStep wrote. “I saw a total stranger and I finally realized with blood curdling clarity, if I didn’t do something now I was going to lose a piece of myself I would never be able to get back.”

She then mentioned her father’s partner, Jude, with whom she said Alan Beatts shared an open relationship. To buy herself time, she recalled telling her father, “I wouldn’t feel right doing anything further unless you talk to Jude first.”

She recalled that the comment stopped her father, who told her that he would speak to Jude about it, but it would be a “difficult conversation.” DoveStep said that was fine, and she showed her father out, she said.

“My father was a grown man at the time, but I had just turned 19,” the younger Beatts wrote. “He was my father; I was a teenager. It was not my responsibility to defuse a situation like this, it was his responsibility to never put me there in the first place.”

DoveStep Beatts, whom Mission Local contacted after hearing the statements on the Thursday podcast, confirmed that she made the allegations about her father and independently shared her allegations.

Keene said during the podcast that DoveStep Beatts additionally said that she did not want to “cancel” her father “who has done a lot of good in her life” and who was “her best friend” growing up. She told Keene that speaking out was not meant to ruin his life or get revenge.

“But through my own experiences with Alan I know he’s a predator,” she told Keene, “he uses the bookstore paired with his standing in the community to find and prey on people who are vulnerable. It’s a pattern of behavior that I’d seen glimpses of but never fully understood when I was a child, and experienced first hand as a teenager.”

The ex-girlfriend wrote this to Keene and verified with Mission Local that the statements were hers:

“Alan and I stayed out late bar-hopping. Alan ended up getting shitfaced. I was drunk but still alert and functional. We arrived back at the room and I managed to get Alan to the couch before he collapsed.

When I leaned in to check on him, his eyes snapped open and he grabbed a handful of hair at the back of my head. He removed his large folding knife from his belt, snapped it open, and pressed it against my throat. I froze, thinking he’d realize it was me and would stop.

Instead he sat up and began yanking me back and forth by the hair. He moved the knife, pressing it against my ribs, thighs, arms, stomach, narrating what he would do to make me bleed out before help arrived.

I started crying and he let go of my hair, folded the knife, and put it on the coffee table. I moved the knife away. He demanded I move it back. He picked it up and held it while we talked. I don’t remember much of the conversation afterwards, just that I said anything to calm him down. He started crying and I ended up soothing him until he stumbled to the bed and fell asleep. The next morning he claimed not to remember what had happened and said he wasn’t ready to quit drinking.”

She did not report the incident to the police because she was the only sober witness and she didn’t trust that the justice system in Louisiana would help her, she told Mission Local. Sarah Read, who originally shared the allegation on social media last month, said she was not told of that specific incident then, but she had heard the ex-girlfriend “speak of an abusive relationship.”

Furthermore, the ex-girlfriend told Keene for his podcast that the incident, while the most concrete story, was illustrative of a pattern of behavior she’d seen throughout their relationship, which ended in October 2018.

A former longtime Borderlands employee, who requested anonymity, told Mission Local that they did not know about the specific incidents at the time but said the allegations fit into what the employee viewed as a pattern of abuse.

Read, who won a 2019 Bram Stoker Award for her novel The Bone Weaver’s Orchard, said she helped make the accusations public because many writers seek out Borderlands as an events venue.  “Having heard these stories from my friend, I didn’t want any writers to find themselves in a dangerous situation,” she told Mission Local.

She added she felt bad for the bookstore itself, explaining that she “grew up in independent bookstores” and recognizes how important they are in their communities. “But no business is more important than these women’s trauma.”

During his podcast, Keene sounded anguished as the aired accusations against Beatts, with whom he said he’s had a 20-year “professional and personal relationship.”

“He is one of the first people to give me a legitimate chance,” Keene said, noting that The Rising, Keene’s first book that won him a 2003 Bram Stoker award, “would not have hit the bestseller list without Alan’s help.”

Then he read the allegations against his friend, stating that he “thought long and hard” about amplifying them though his podcast, but ultimately decided to do so because Read, who originally brought attention to the accusations, was prominent in the industry and the allegations were being aired publicly on social media. “It is news that impacts the genre,” Keene said.

And after reading the allegations, Keene said: “This is the one that broke me, folks. …All I can say is I’m sorry to everyone involved. …I will not be doing any more signings at Borderlands Books.”

Meg Elison, a Bay Area-based author and winner of the 2014 Philip K. Dick award, tweeted that Borderlands “was my home bookstore.”

“I’ve launched and read there, and attended the launches and readings of others,” Elison wrote. “… I’ve had some of the best moments of my life inside. But I can’t support Alan Beatts, so I am done supporting Borderlands.”

Christopher Golden, a New York Times best-selling author, said on Twitter that he found the allegations “stomach-turning.” He wrote: “I love the store but as long as he’s connected to it, I couldn’t support them.”