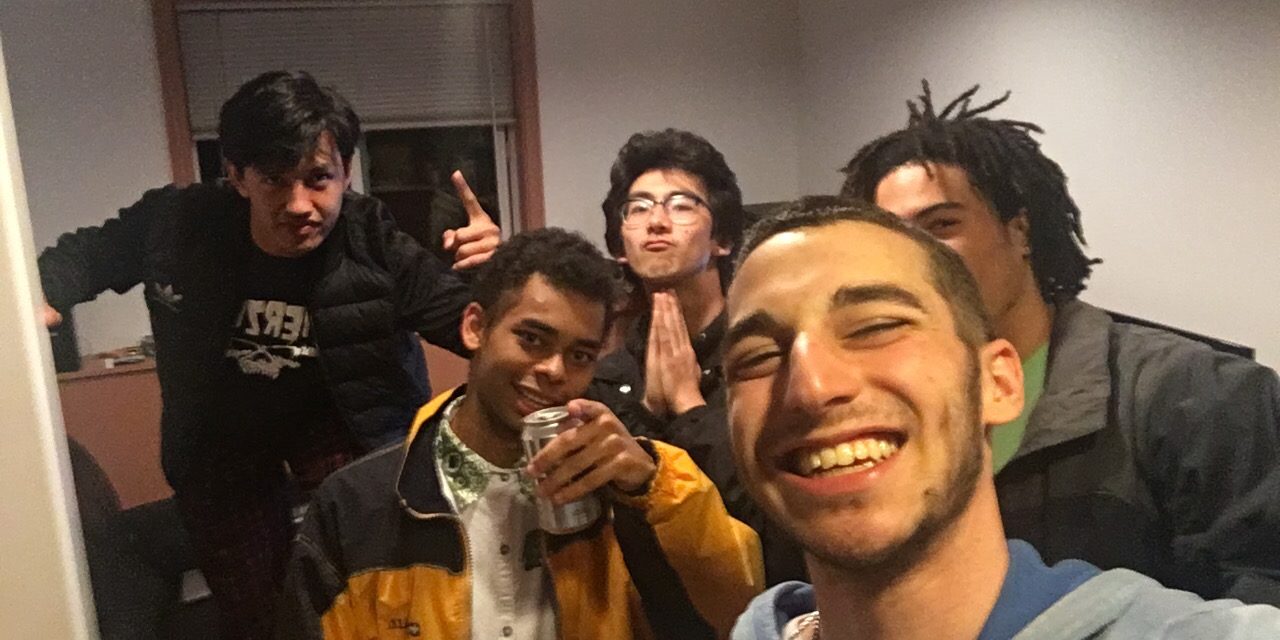 When 23-year-old Andrew Sanders walked out of his downtown apartment Friday afternoon to attend this year’s third Dolores Hill Bomb, he said he was just going to check it out, remembers his roommate Jonathan Concool.

By around 5:30 p.m., Sanders — a skilled fixed-gear bicyclist — was speeding down Dolores Street, doing what he loved most: riding his bike. Fast.

Toward the bottom of the hill, Sanders and a skateboarder collided, throwing Sanders on his head with such impact that his helmet cracked. He was transported to the hospital in critical condition, placed on life support, and died on Sunday afternoon.

“There’s no way the thought of dying ever crossed his mind when he was going down that hill,” Concool said. “When he was riding his bike, he felt invincible.”

Andrew Sanders — or just “Sanders” to his friends — was a lot of different things to a lot of different people, friends recalled: a sketch artist, a daredevil cyclist, a musician, a b-boy breakdancer, a photographer, an amateur barber, a recent San Francisco State graduate, a roommate who would sing numbers from Grease at the top of lungs in the shower. Above all, he was a light-hearted, hyper-energetic goofball who served as a nexus between all of these worlds — “the glue guy,” as Concool put it — and one that was obsessive about mastering his crafts.

Sanders was born on Aug. 1, 1996, and grew up in San Jose, according to friends. He came up to San Francisco in 2014 to attend college, where he spent his first year in the dorms.

“He would be dancing every spare moment,” recalled Andrew Harley, who spent his first year living in a dorm room with Sanders. “He was really into breakdancing. He always carried around a beatbox.” 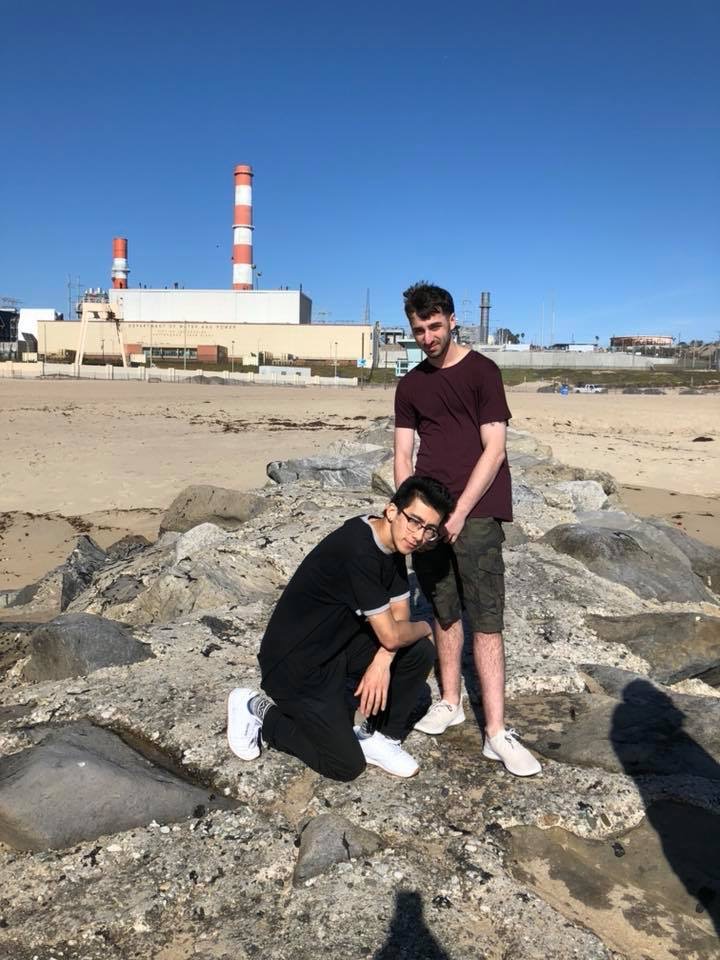 Friends described him as almost uncannily upbeat and unabashed about who he was. Michael Guntetong, a friend from the dorms and later Sanders’ roommate, remembered that, while hanging out in the dorms, Sanders, who had a glass right eye, took it out for his friends to see. “It was so gross and strange,” Guntetong said, but it made for good laughs.

And he was also passionate. “If he was into something, he was really into something,” Guntetong added, noting that Sanders poured everything into his hobbies, most especially cycling and drawing.

During their second year, Sanders, Guntetong, Concool, and Pierre Sjogreen found an apartment together at the edge of Lake Merced. “Sanders was that loud type of roommate that everyone loved,” Sjogreen said.

All of his roommates said Sanders would always sing in the shower — whether it was Grease, The Smiths, Mr. Twin Sister, SALES, King Kruel, or his favorite band TOPS. “I’d be waking up to him singing in the shower,” Concool said.

He was also obsessed with fixed-gear biking. When watching Sanders ride his bike, friends saw a majestic combination of power and grace. “We always associated him with a swan,” said Sjogreen, who does not bike.

Johnny Domingo, a close friend and co-worker at the downtown Allbirds shoe store, went on a bike ride with Sanders around the city a year and a half ago. Domingo had just purchased his first bike. “I just remember being a little scared during the bike ride — because of the daredevil he was,” Domingo said. “I had to muster up the courage.”

“I remember zooming through traffic and passing cars,” Domingo continued. “We were going faster than cars. It was exhilarating. It goes to prove how he lived his life with no fear.”

And understanding just how it was Sanders — the bright, silly, and motivated person — could die at such a young age rests exactly in that notion: “Andrew was a big risk-taker,” Harley said. “He was always trying to race or go faster.”

Friends said that he was a regular at the Dolores Hill Bomb. All of them agreed that Sanders died doing something he loved. “We can say he went out smiling,” said Daniel Mejia, a fellow cyclist, who would often hang out with Sanders at the Ferry Building and was present at the hill bomb on Friday. “That makes us feel better.”

But Friday’s hill bomb was unusual, Mejia said. It had been the third to take place in the last three weeks, following a very large event that drew around a thousand people on Thursday, July 9. Mejia said this happened because of a scheduling mishap that gave three different dates for the event this year.

“When we got there, it was a very odd day,” Mejia said, noting that he hadn’t interacted with Sanders that day. “It didn’t feel as safe as other days. It overall felt like the people who were there weren’t the usual people who come.”

Mejia did not see the moment that Sanders and the skateboarder collided. “People were crowded around him when he fell,” Mejia recalled. “But I did recognize his bike.”

On Saturday, as Sanders remained on life support, the San Francisco Municipal Transportation Agency installed several rows of fist-sized “rumble strips” on Dolores Street to deter future hill bombing, effectively ending the Dolores Hill Bomb — or the “Fastest Hill Bomb,” as some call it — for good.

Sanders’ death became a sobering reminder of the consequences fixed-gear cyclists and skateboarders take on when they bomb the city’s steep hills — a seminal part of San Francisco’s extreme sporting culture.

“Within the culture, skateboarding [and biking] in San Francisco has a lot to with geography,” Mejia said. “It’s a big part of the culture to do hill bombs — to go fast. That’s what people here like to do. People sign up for it. People know what they’re getting into.”

Mejia said it’s always advised to only do what you’re comfortable with.

“The takeaway from this should not be a negative view of the risks we take,” Mejia said. “We do risk our lives and there’s a lot more to it than what people see. Of course, it’s a very dangerous sport, but [Sanders] was a very skilled rider. It could have happened to anyone at any skill.”

Before Sanders was taken off life support, his friends were given the opportunity to say their last words to him over the phone, even as he lay unconscious. Sjogreen remembered how it was always difficult to wake him up from a nap. Concool said it was an honor to grow up with him, from 18-year-old kids to working professionals in San Francisco. Harley, who moved away his freshman year and now lives in Brooklyn, told Sanders that he would have to make art for the two of them. And “I joked that everybody around him couldn’t handle how fast he was going.” 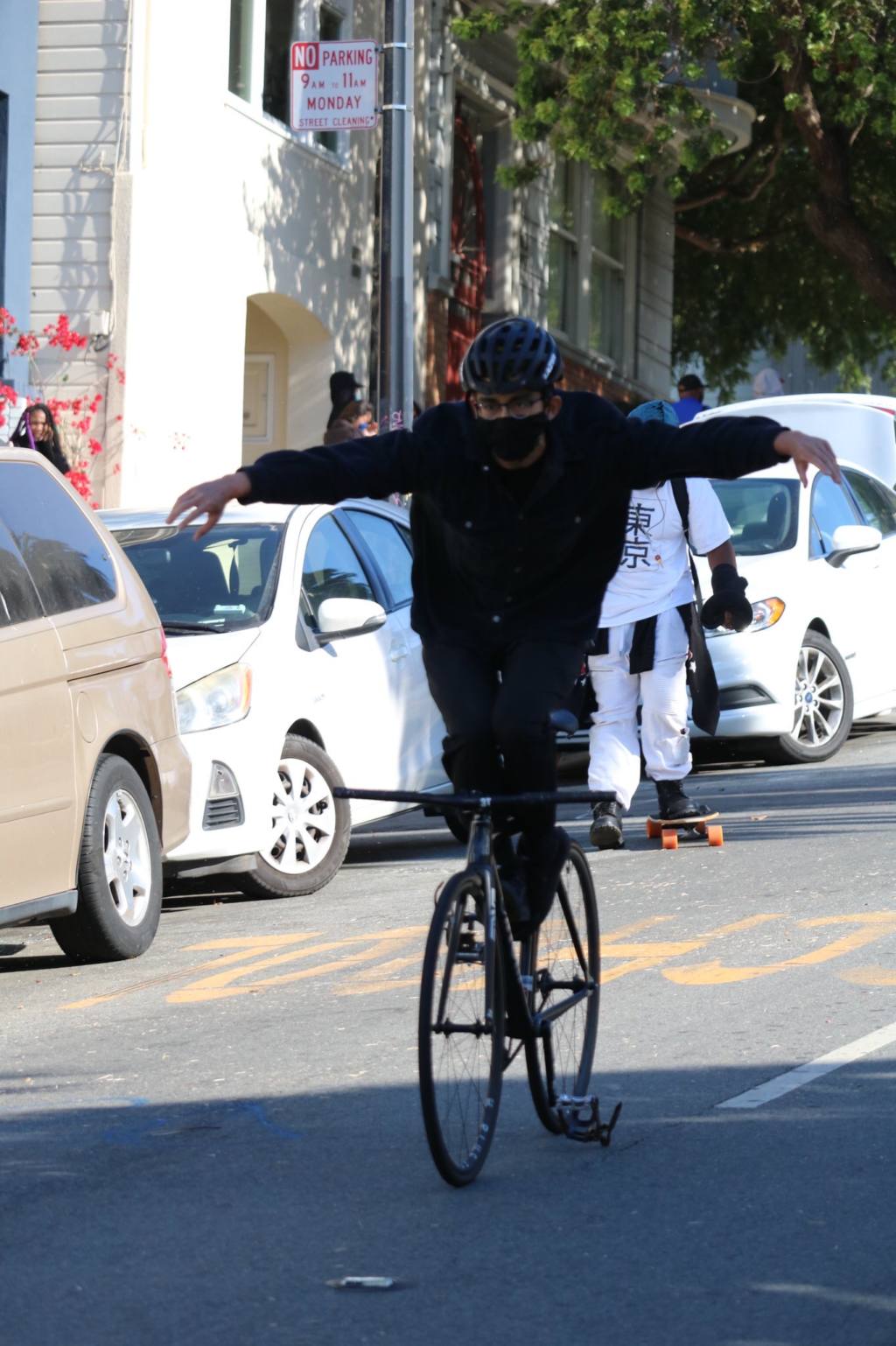 Andrew Sanders rides down Dolores Street on Friday, July 17, 2020. The photo was captured by a spectator and shared with Concool. It is unclear if this ride down Dolores was Sanders’ last.