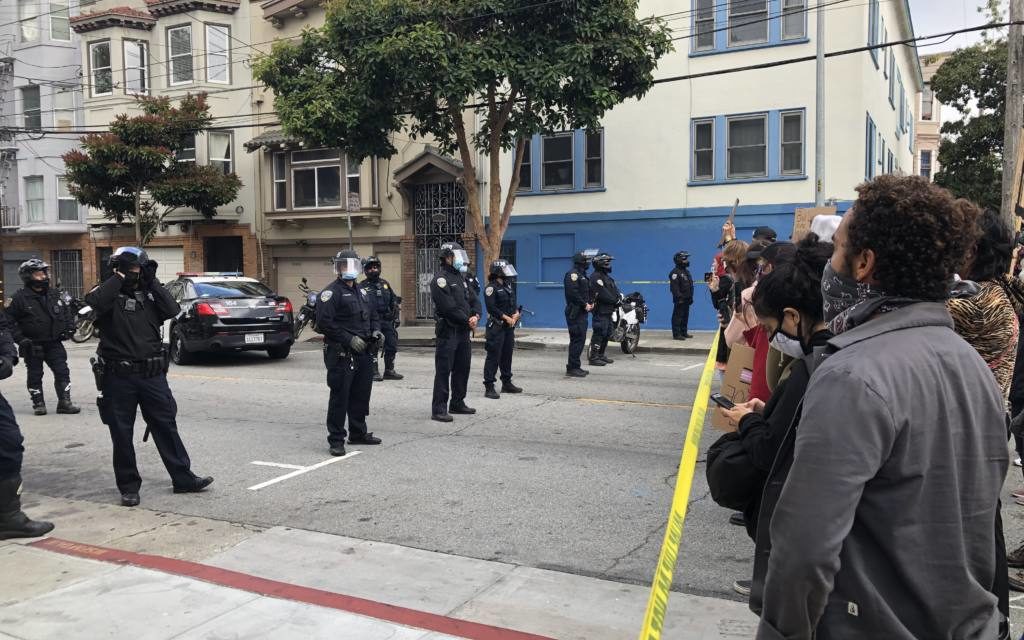 Hundreds of neighbors, protesters and bystanders stopped to watch what became a nearly eight-hour standoff between Vietnam War veteran James Craft and the San Francisco Police, after cops responded to a call at around 11:30 a.m. that Craft was wielding a metal pipe and acting “menacing.”

The situation unfolded near Craft’s apartment of 12 years, near 18th and San Carlos streets. Officers tried peacefully disarming Craft by talking to him through a megaphone and using “active listening.” A staff member from the Department of Public Health arrived a little before 7:30 p.m.

The scene broke up at around 7:35 p.m. after police officers were able to deploy two, six-foot metal poles to pin Craft against the wall and rush in to disarm him, according to the property manager, Arnel Garay. A neighbor who looked on called from his balcony to the crowd that Craft was all right and appeared to be taken to receive medical attention.

Read our coverage of the situation as it broke here:

2:15 p.m.: Police are attempting to disarm a man holding a metal pipe on 18th Street between Mission and Valencia. The area is currently taped off as around a dozen officers attempt to defuse the situation. It’s unclear what precipitated the call or whether the man has harmed anyone.

Bystanders observing from 18th and Mission streets are making it known to police officers that they are “watching” how the police handle the situation. Police have, so far, not drawn their firearms. Only one officer seems to be holding a “less-lethal” beanbag gun.

Mission Local’s Natalia Gurevich reports that the man holding the metal pipe is currently pacing back and forth, and a witness reported that the police have been talking to the man in an attempt to de-escalate the situation.

⚠️ POLICE ACTIVITY – AVOID THE AREA ⚠️
————-
Please avoid the area of 18th & Mission. Updates will be provided as they become available. pic.twitter.com/fSeqxFNpxF

3:05 p.m.: David Soriano said he’s been watching the incident from a building near 18th and Lexington streets. He said it began around noon. He  does not know the man with pipe personally, but the man is a regular denizen of 18th Street. Soriano said he saw the man, whose name he didn’t know, continue to swing the metal object at around noon. The police arrived as the man continued.

The man, however, has not been receptive to their entreaties.

3:15 p.m.: A couple dozen bystanders have gathered on the corner of 18th and Mission streets, yelling barbs at police and questioning their tactics. “Hey, you’re a cowardly piece of shit,” one man yelled at an officer, telling the officer that he “looks so good with his gun.”

But the police appear have been trying to peacefully de-escalate the situation for hours.

3:25 p.m.: Police spokesman Officer Robert Rueca told Mission Local on the scene that police received a call at around 11:30 a.m. regarding a man holding a metal pipe and acting “menacing” in the area of 18th and San Carlos streets. Police have been with the man ever since in an attempt to “assist” him. “We want to resolve it as peacefully as possible,” Rueca said.

Indeed, police spokesman Officer Adam Lobsinger said that officers have been trying to allow the man the “time and space” to “lead the conversation.” And they’re using “active listening” to defuse the situation.

Rueca said that, nevertheless, the man is still making “threatening statements” and has a “potential for violence.”

4:25 p.m.: The individual with the pipe has been identified as James Craft by the manager of the building on 18th and San Carlos streets, where Craft has apparently lived for 12 years.

Arnel Garay, the manager, said that Craft is a Vietnam War veteran in his 60s who largely keeps to himself, wakes up very early in the morning, pays his rent on time — and, as a part of his lifestyle, carries around a wooden table leg. Garay guessed Craft likely carries the leg around “for his protection.” Garay said Craft is not violent.

“He doesn’t bother anybody,” Garay said. “He doesn’t like anybody bothering him.”

Garay does not know why Craft was carrying around a metal object today. But Garay surmised that this made someone feel uncomfortable, and the police were summoned, leading to the standoff.

“I don’t understand why they have a problem with the stick,” Garay said, noting that the problem might only be that Craft is not being compliant.

If the cops were to walk away, Garay guessed, “he’d probably just go back to his room.”

4:45 p.m.: A witness watching the standoff from their window, who asked to remain anonymous, said that at around 11:52 a.m., a couple of police officers approached Craft, who was holding a pipe but “seemingly not doing much.” More officers arrived shortly after.

“At this point I am on my roof and counted 54 uniformed cops and two negotiators in sight,” the person said around 4:30 p.m. 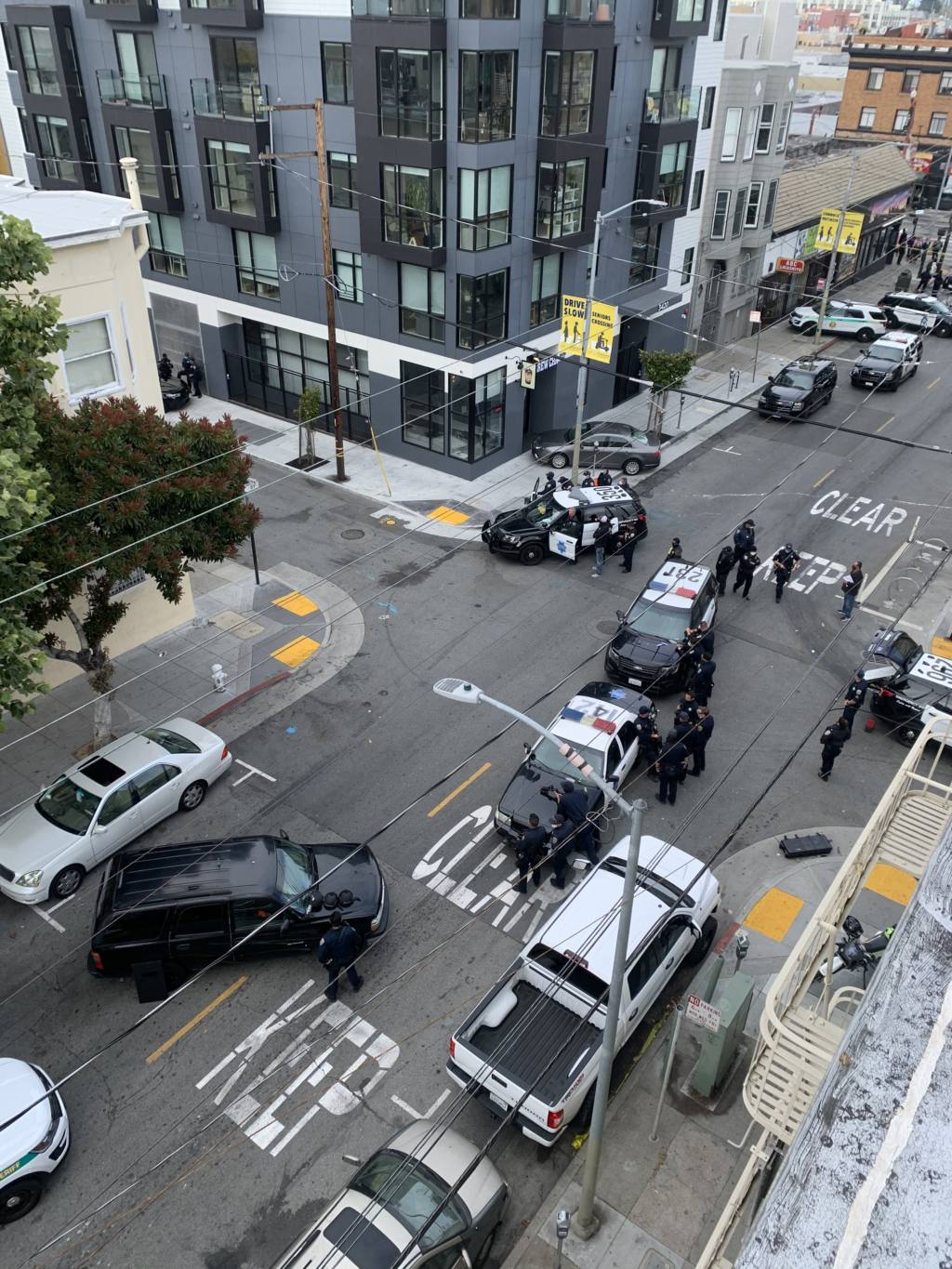 6:00 p.m.: A Black Lives Matter march that had been working its way down Valencia Street caught wind of the police standoff with Craft, and around 100 people outside the perimeter began chanting “Let him go! Let him go!” and “Social workers, not police!”

The standoff has entered its seventh hour.

Around 100 protesters who happened upon the police standoff with the Vietnam veteran are now chanting “let him go! Let him go!” The stand-off has entered its seventh hour. https://t.co/pt0AlX1or2 pic.twitter.com/xrxSPfEj48

One of the Black Lives Matter organizers who stopped by, Maryann Jenkins, told Mission Local that “This was not part of the plan.” While they were on the march, they got texts from community organizers and decided to come.

Protesters asked each other to quiet down after someone said that Craft was growing “anxious” from the shouting.  The police continued to ask Craft about whether he wanted food and discussed pizza with him. Organizers moved the group to a parking lot at 18th and Valencia streets to give Craft some space.

Officers implored Craft to put the bar down and asked if he would like a warm blanket and food.

Protestors have gone silent so not to distress the veteran any further pic.twitter.com/uPX3dlQ5Xh

100 or so protesters quietly observing as police stand off with Vietnam vet on 18th and Lexington moves into its 8th hour. pic.twitter.com/sji773OgV3

Officers tried to coax Craft to a patrol car. They appeared to be setting off an alarm, though it’s unclear how or from what, while they asked him to come to the car.

Officers are asking the veteran to drop the metal bar pic.twitter.com/gebA5ejmv4

Tatiana, 15, came from a protest that started on Duboce Ave. but decided to stay here at 18th and Lexington streets when she discovered what was going on.

“People in the community have to stand up for each other,” Tatiana said. “We let so many things go unseen, so we have to protect each other.”

The crowd erupted into cheers as a staff member from the San Francisco Department of Public Health arrived and signaled his presence to the crowd. The officers responding had been relieved by a new shift minutes ago.

Following a nearly eight-hour standoff, the situation finally had been resolved. A neighbor called out from his balcony that Craft is alive and will receive medical attention.

Garay, who had been watching the whole incident from San Carlos Street and Sycamore Street, told Mission Local that in order to de-escalate the situation, they tried to pin Craft against the wall using long six-foot metal poles until he let go of the bar.

Garay also said that a popping sound heard earlier by our reporter was allegedly pepper spray.

The stand-off appears to be resolved. Dr. Courtney Thomas of SFDPH told the protesters that the Vietnam vet is going to the hospital with him — after more that 8 hours of standing off with police. The protesters cheered. pic.twitter.com/AcR7xUISv9

Mission Local is on the scene so that you don’t have to be. Support local news today.