Police chief says transparency is a step to accountability, but declines to explain his Jessica Williams decision 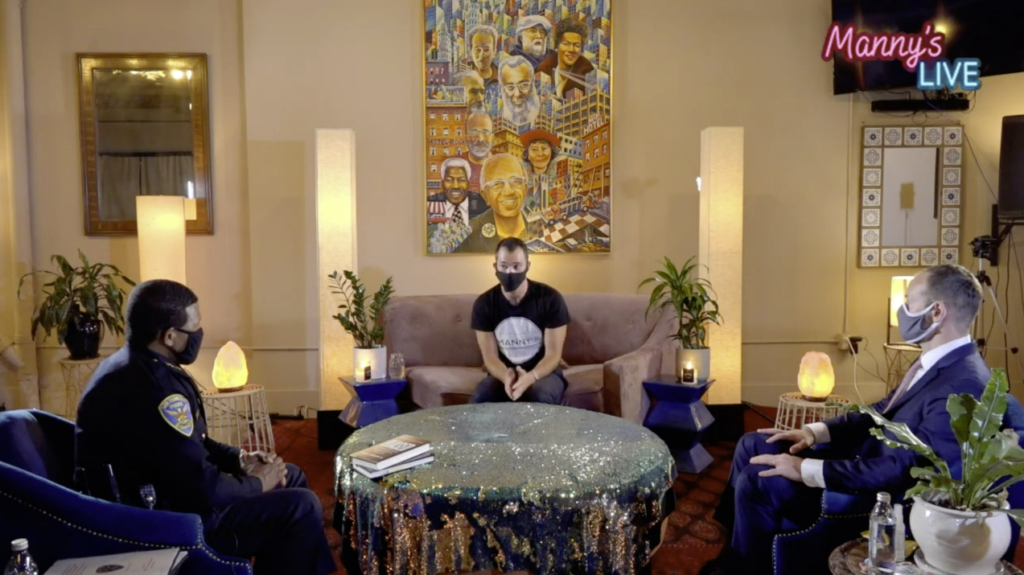 San Francisco Police Chief Bill Scott declined to say why he recommended no disciplinary action for the officer who shot and killed Jessica Williams in 2016. Nevertheless, he told the audience watching a livestream interview Tuesday night that transparency would be the key to holding police accountable in the future.

Scott was interviewed alongside District Attorney Chesa Boudin by Manny Yekutiel, owner of Manny’s at 16th and Valencia, in the first of what the café hopes will be a series of events livestreamed on Facebook and YouTube. The three men appeared together on camera, physically distanced and wearing facemasks.

Last week, a Mission Local story revealed that the Department of Police Accountability’s investigation originally recommended that the officer who shot Jessica Williams be terminated, but that Scott recommended no disciplinary action. The officer was ultimately suspended for 45 days in a settlement negotiated between the police department, the DPA, and the officer’s attorneys – and approved in a split vote by the Police Commission.

“It just seems like, oftentimes when something really bad happens, the punishment that’s meted out to a police officer is a lot smaller — or disproportionately smaller — than you might expect,” Yekutiel told Scott. “What happened resulted in a woman’s life being lost, and he got 45 days [suspended], no pay.”

“Transparency is a huge step towards accountability,” Scott replied, and cited SB 1421, the California law passed in 2018 that allowed misconduct records to be released through public records requests.

“When Miss Williams lost her life at the hands of San Francisco police ­— this department, my department — that law didn’t exist,” Scott said. “I won’t sit here and say decisions would have been different because of that, but what I will say is when there’s transparency, with that comes accountability. Because the public gets to see all of the facts and the public gets to make its own judgement on whether that decision was right or not right.”

Scott said that before SB 1421, disciplinary decisions were made behind closed doors, but that now all of the information was available for the public to review.

But Yekutiel pushed back.

“Why does the punishment seem so light, when something as grave as a death happened?” he asked.

“Because a life was lost. That is in and of itself shocking,” Scott said, and encouraged everyone to read the case before coming to a conclusion.

“A lot of the procedural issues brought up in that case were part of the issue. The death itself is a separate adjudication from a lot of the other things that this 45-day punishment was based on,” Scott added. “I would invite people to read the case.”

The full case is not currently available to the public, but Mission Local has uploaded portions of the 1,763-page document obtained from the DPA through a public records request. Uploading the entire document was impractical due to the 1.5 gigabyte file size. You can read the first part of the document here, along with the minutes of the Police Commission meeting in September 2019.

Unfortunately, it was at that point when Manny’s experienced some technical difficulties and the livestream was frozen for everyone watching on both Facebook and YouTube. The broadcast resumed some 15 minutes later, but the conversation had moved on to other topics.

Manny’s staff told Mission Local that the entire interview was recorded and will be made available in its entirety in the near future.

Earlier in the interview, Boudin and Scott talked about what an idealized world might look like if policing were completely reimagined in the wake of the defund movement.

“In an ideal world, honestly, I think we’d live in a society where we don’t need police,” Boudin said. “Where we would respect each other’s rights and rules and regulations, and we wouldn’t have to have other people to do that. And that’s not real. That’s not the real world I expect I’ll ever live in.”

Short of that, he said, he would like to live in a world where police didn’t carry firearms. But that, too, wasn’t immediately realistic.

“To get there, we need to make sure that guns are off the streets, and the Supreme Court and the Second Amendment and the National Rifle Association make it really difficult,” he said. How am I going to talk to Chief Scott and talk about your officers not carrying guns when we know how many guns are on the streets of San Francisco? That’s not real, either.”

For his part, Scott said he imagined a world that had more collaboration between government services.

“We have departments that do great work. Where sometimes I think we fall short is collaboration,” he said. “Our role (as police) in society was really the prevention of crime, the absence of crime, not reacting to crime when crime occurs — but in order for that to happen … communities need to be healthier, and stronger, and more resilient. It touches on a lot of other social issues.”

Scott also talked about how he saw his role as an African American police chief in the midst of the social movement unfolding since George Floyd was killed by police on May 25 in Minneapolis.

“I think my role is to be a leader,” he said. “And in doing that, my background and experience … brings the perspective of a Black man in America.”

Scott described growing up in Birmingham, Alabama, in the 1970s, where his family moved to a white neighborhood and was the first Black family on the block.

“We moved to a very segregated and racist place,” he said. “I remember this vividly, overnight, for sale signs up and down the block. I didn’t know what it meant then, but as I grew older I knew what it meant.”

Scott also talked about his experiences being pulled over by police in Alabama as a young man in college.

“I remember him repeatedly call me ‘boy,’” Scott said. “In the south, calling a grown Black man a boy meant something. It meant that you were less than, that you weren’t equal to.”

“To this day, I remember how that made me feel,” he said.

As long as we’re being transparent, we could use a donation from you. Please support us now.