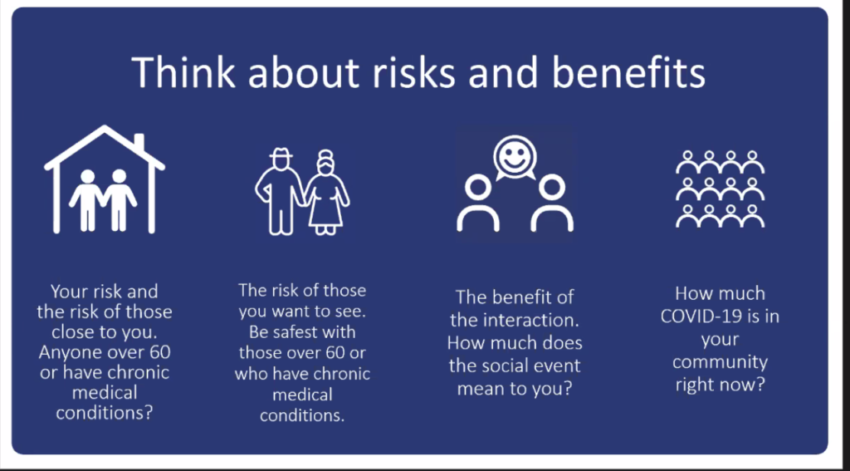 San Franciscans are entering a new phase of social interaction.

As restrictions ease and some businesses reopen, people are likely to seek out in-person connections with family and friends, acknowledged Dr. Grant Colfax, director of the San Francisco Department of Public Health, in a virtual roundtable today.

“I know, and I think many of us know, that as this pandemic continues, the longer we go without seeing our families or friends outside of our household, the harder it is on our emotional well-being,” said Colfax.

While it’s still safest to stay home, Colfax said, there are ways to make public interactions safer, and Colfax went over the Department of Public Health’s guidelines.

“This is really a harm-reduction approach,” said Colfax. “It recognizes that humans sometimes take risks with their behavior and that we can make those choices less harmful to both individuals and to communities.”

Colfax advised that if anyone is over the age of 60 or has a chronic health condition, it is still safest to stay home. And, before choosing to engage with someone outside your immediate household, make an informed decision. Weigh the benefits and risks.

But if people choose to socialize with others outside of their households in the days ahead, Colfax provided some “common-sense advice.”

It’s best to meet outside, maintain at least six feet of distance from one another, wear face coverings, use hand sanitizer, and wash hands during or after the interaction.

And don’t go out if you are sick.

Colfax recommended that anyone feeling sick or showing the more common symptoms of COVID-19 – shortness of breath or fever – talk to their healthcare provider and visit one of San Francisco’s 30 testing sites.

But he acknowledged that tests are not always one hundred percent accurate. If people test negative and are feeling symptoms, they should stay home until they improve, said Colfax.

Colfax hopes the advice will help people reduce the risk of transmission while interacting. “We can try to require and order people to do certain things,” said Colfax. But, he acknowledged, people will more likely receive the information and make their own decisions.

“If we are all doing our part, we can keep each other safer and healthier and our recovery will be faster,” said Colfax.