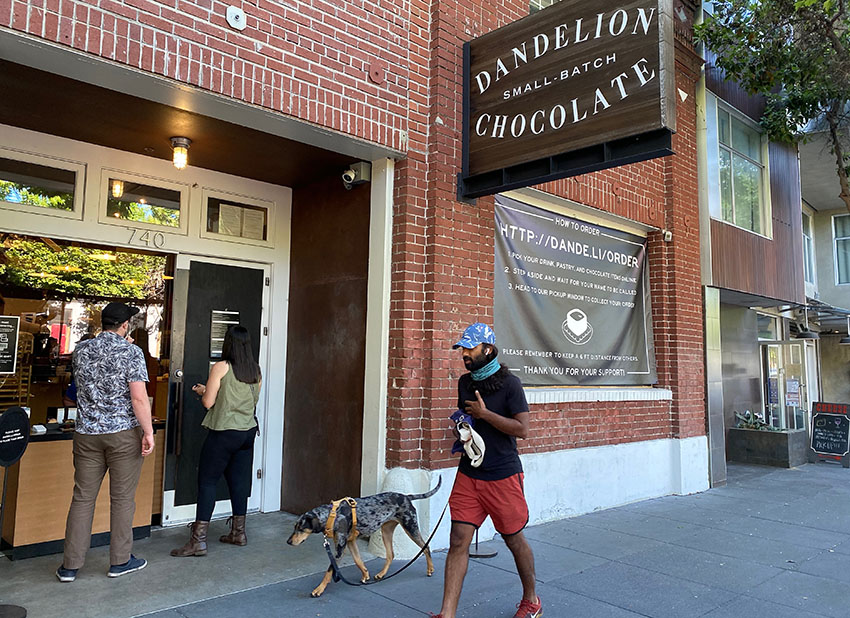 Cheyenne Eisert was home from work in March 2019 when she saw a message on a Dandelion Chocolate employee chat room from her manager. It showed a photo of an orangutan with the name “Cheyenne” underneath.

Eisert, who is of Filipino descent, was stunned. “I read it and I just put my phone down and then I awkwardly responded because I didn’t really know how to react,” Eisert said in an interview with Mission Local.

Eisert is not alone. Four former Dandelion Chocolate employees told Mission Local that the incident was racist and embodied a company culture that diminishes, tokenizes and discriminates against employees of color. Some accused the company of being “anti-Black.”

The employees are speaking out now because Dandelion Chocolate posted on Instagram to show solidarity with the recent movement for racial justice in the wake of the police killing of George Floyd.

“Remember when one of your managers compared me to a monkey in front of her mainly POC staff and BIPOC staff. And y’all did nothing about it except transfer her to your sparkly new factory?” Eisert wrote on Dandelion’s “Blackout Tuesday” post on June 2. “Yeah, we still do. Not much solidarity there.”

A week after that post, Todd Masonis, the founder and CEO of the company, replied to Eisert, affirming that the incident was “racist.” He noted that the company conducted an investigation in 2019 and came to “what we thought was a meaningful resolution at the time.”

“We did what we thought was right at the time, but clearly in hindsight, we missed the mark,” Masonis wrote in response to Eisert’s comment. “We should have done better. We are learning from this and are committed to listening and acting differently in the future.” 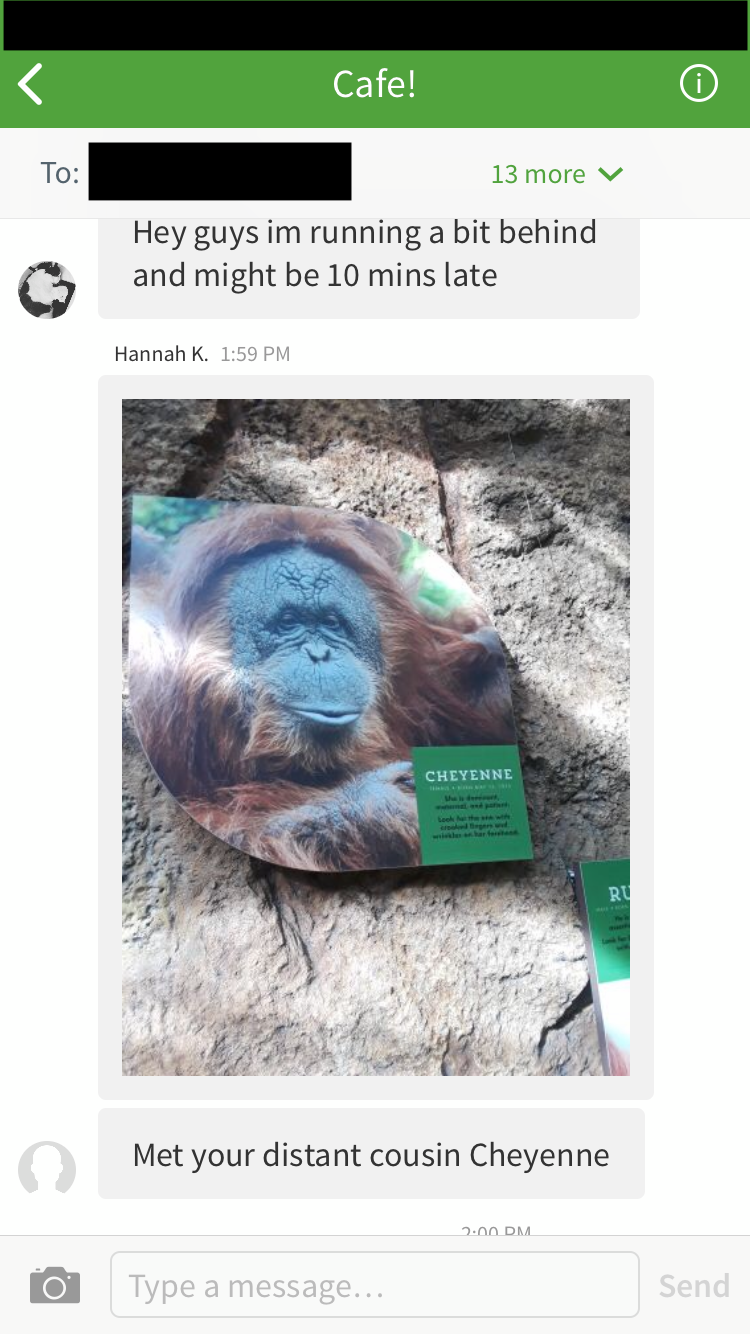 ‘We can do better’

During a phone interview with Mission Local on Thursday, Masonis, Dandelion’s CEO, said repeatedly: “We can do better.”

“And it seemed pretty clear to a lot of people that [Kram] hadn’t intended it,” he said. “But she clearly had an impact regardless of what she thought about it.”

Masonis said, following the incident, he froze Kram’s “pay increases or any responsibility increases,” and “transferred her to a different location, one that had lower tips.”

Dandelion, he said, believed it handled the situation correctly at the time, but now, “in retrospect, probably not.”

A former Dandelion Chocolate employee gave Mission Local Kram’s phone number. When we called and outlined the situation, the woman answering the phone said, “I think you have the wrong number.” Asked whether her name was Hannah Kram, the person said: “I am not going to talk to you.” We have called Kram through Facebook messenger and left her messages on that platform. She has not returned the call or the messages.

Current and former employees say that the incident was not isolated — that incidents like these permeated a discriminatory company culture that persists today. “There are definitely culture issues with anti-Blackness not being treated seriously,” said Adonis Valentine, who resigned from the company in August 2019 after Valentine’s managers complained about the worker’s “aggressive” attitude. Valentine is Black.

“I noticed that he took extra care to make certain that people of darker complexion were always particularly nice and smiley,” Valentine said of Dandelion Chocolate’s general manager, Graeme Lowe. “And I had white coworkers who never once had to deal with that.”

Valentine said that Lowe threatened firing Valentine from the company if Valentine’s behavior didn’t improve following an incident in which Valentine simply called out a customer’s name extra loud to serve the person a drink, Valentine said.

The company, according to Valentine, created a personal “performance plan,” documenting other times where Valentine was perceived as being “aggressive.”

Valentine resigned shortly after the interaction with Lowe, as Valentine said a pattern was clear: “Every single person who was having an issue with being deemed aggressive is Black.”

Masonis said that labeling Valentine’s experience as an indicator of systemic racism “might not hold up to scrutiny.” He read Mission Local the improvement plan that accused Valentine of being “pushy or aggressive rather than helpful and collaborative.” It cited instances in which Valentine turned down help at the espresso machine during a busy time, walked out of a shift, and turned down music and shouted a customer’s name.

Masonis said that some of the co-workers who complained were “people of color.”

He did not make Lowe, the general manager, immediately available for an interview.

Valentine said it was a “knee-jerk reaction” to imply that people of color cannot harbor subjective bias against Black people. Any dissent by Black employees “about how anything was run was perceived as attitude or aggression,” Valentine said.

“They got caught up doing something racist,” Valentine said. “And immediately after they started perceiving issues with a Black person.”

After Kram had sent the message to staff comparing Eisert to an orangutan, Gjaidan Stewart brought the issue to the Dandelion Chocolate human resources department, Stewart said. It kicked off an investigation that resulted in a couple of meetings with staff. The company announced that Kram would be relocated. Some employees Mission Local spoke to said Kram and the company apologized, others said there was no apology.

All agreed that seeing Kram transferred was not enough.

“Black and brown employees were very upset,” Stewart said. “There was a feeling of hopelessness — like we were being not heard and not supported.”

In addition to transferring Kram, according to employees, the company subsequently formed several “brown bag lunches” — talking sessions in which employees were invited to bring their lunch and listen to a presentation by local community members.

Stewart said the meetings were “super informative” but were not well attended — held at times when cafe workers were not able to attend.

And then, after a couple of sessions, “things returned back to normal,” Stewart said. “It simply fizzled away at the time.”

Stewart was involved in a motor collision in October 2019 and was off work until February 2020.  Upon returning, Stewart was reassigned to the 16th Street location, where Kram was a manager — even though Stewart had previously objected to working under Kram after the racist text message incident.

“It seemed very pointed and intentional as a way to manage me out,” Stewart said.

Stewart resigned from Dandelion after only a couple of shifts. Stewart had had enough.

Swept under the rug

Employees Mission Local spoke to, including Stewart, Valentine, and Eisert, described Dandelion Chocolate’s response to these incidents as disingenuous — as a means to merely “sweep them under the rug.”

Another example came years earlier, in April 2017, when Jen Villasenor was closing with a male assistant manager whom Villasenor didn’t know well. A Great Dane passed by on the sidewalk and Villasenor remembers the male manager saying, “that dog would rape you.”

“He tried to make it a joke and say that’s not what he meant,” Villasenor said. “At that point, I was very uncomfortable — I was in the dark with him.”

Villasenor brought it up to human resources staff, who subsequently launched an investigation. Little happened. The manager received some training, according to Villasenor, but remained an assistant manager for years.

“I quit within a year because I had nightly stress dreams about working there because management was so toxic,” Villasenor said.

Every employee Mission Local spoke to was a retail or front-of-the-house employee, and most were people of color. All said they were treated like lower-class employees.

“There seemed to be a very big disconnect in the way the labor-focused employees — Black and brown people — and corporate employees — white people — were treated,” Stewart said. “We were obviously treated like the help and lower-class employees.”

Eisert agreed. She said the corporate staff rarely acknowledged the cafe workers. Their mannerisms, she said, imparted the message that “we’re just down below and never got full respect from them.”

All of this in spite of the company trying to “make the face of the company diverse,” Eisert said. “Everyone in the cafe is a minority. They really tried to push that, which I find really interesting because it’s almost like tokenism.”

Almost all of the company’s leadership is white, a matter that did not escape every employee we spoke with.

One current, longtime Dandelion Chocolate employee, who identified as a person of color but asked not to be named for this article, said their experience has been good at Dandelion. But, “there is a reason why the people who are claiming to have experienced these things directly are not current employees.”

The person added, “there’s not a lot of sensitivity towards these things.”

“The management team has a system that they built to handle these instances — and it’s a little robotic and it’s not very human,” the person said. “And I think that this stands to be opened up and rebuilt in a way that acknowledges imbalance of power and takes into account voices of marginalized people and builds that into the system.”

Masonis said he was aware of the incident about the manager’s comment about rape, and that the manager was placed on a plan to “improve.” But Masonis said his company could have done more. “In retrospect, what we see is for the party who’s had this happen to them, they don’t necessarily feel that there was a sense of justice.”

The company, he said, is “rethinking” its human resources response to those kinds of incidents.

He said some employees of color had gone through Dandelion’s “professional development course,” but “for whatever reason, it didn’t work out, or we tried to make it work, or we could have done more.”

Asked whether his company suffers from racial bias and discrimination, Masonis replied that “I do think there is such a thing as implicit bias, whether or not people are aware of it.”

“That’s something that takes time and effort and energy and understanding to make sure that we are on our guard for,” he said. “And I think a lot of these incidents were from in the past — doesn’t excuse them — but it just means I think our thinking has evolved over time.”

Dandelion, he said, is starting a “steering committee” composed of employees from around the company to “help us fix issues.” He also said he’s hiring an “outside consultant” selected by the committee. Masonis said he would be rethinking the “employee performance plans.”

A week after Eisert called out Dandelion Chocolate on Instagram, Masonis sent Eisert, Valentine and another employee an email apologizing, saying that “future action can’t make up for past harm.”

Eisert has not responded.

“I thought it was a complete joke because he didn’t even talk to us when this whole situation happened,” Eisert said. “He’s only talking now because he’s getting called out publicly.”