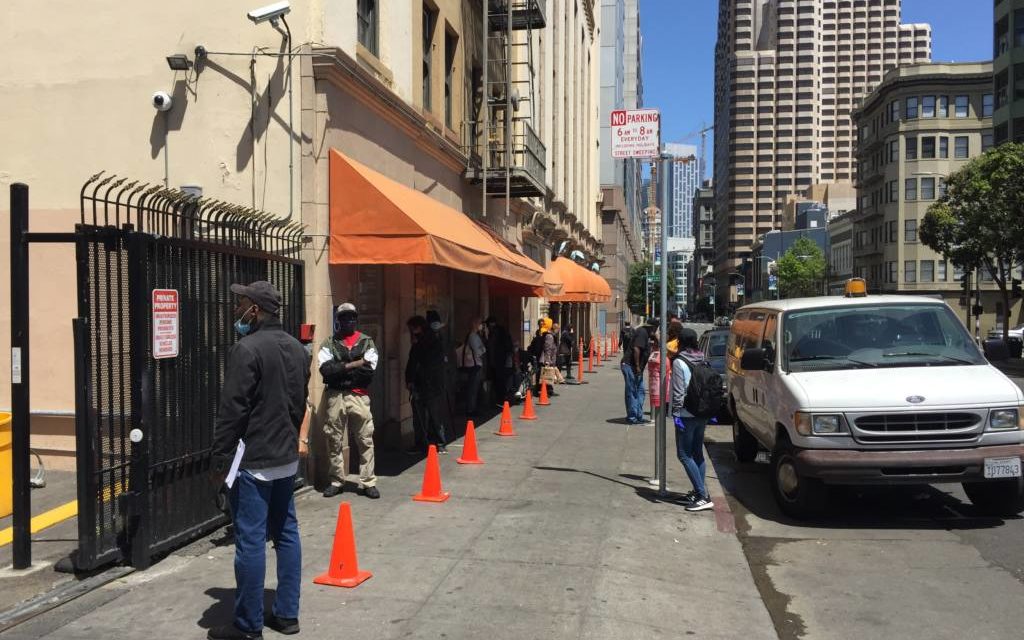 Tenderloin residents waited in line at Glide to sign up for testing, but those without a smartphone were sent home. May 20, 2020. Photo by Michael Toren.

As San Francisco continues to make progress with reopening the city, one alarming trend has stood out: The number of people undergoing COVID-19 testing each day is far, far less than the city’s testing capacity.

Adding a mobile COVID-19 testing site in the Tenderloin was supposed to increase the numbers, but it quickly became clear on Wednesday that, far from encouraging testing, the organizers were sending residents away. On the same day, a different approach in the Bayview succeeded in testing many more residents.

Circulated flyers said online appointments were “strongly encouraged,” and $10 gift cards to Safeway would be given to the first 3,000 people to be tested. In reality, “strongly encouraged” meant if you didn’t make an appointment online, you were redirected to wait in a line at Glide two blocks away, where staff there would help you with the online registration process.

But only if you brought your own smartphone — a commodity lacking among many in the Tenderloin.

“Do you have a cell phone? No? Come back tomorrow with a phone,” Glide staff told Tenderloin residents waiting in line to be tested Wednesday.

Verily also requires people being tested to have a Google account.

“We’ve had people that had Yahoo accounts, we had to actually create them a Gmail account,” said Donna Hilliard, executive director of Code Tenderloin. “Which is kind of [stupid], if you ask me. I think they shouldn’t have to have an email to register.”

Some form of identification is also required, but Hilliard said Verily had relaxed their normally-strict requirements somewhat and were also accepting library cards or a recent printout from the shelter system.

Despite the COVID-19 testing site being vastly under capacity, same-day appointments were unavailable. Anyone walking up to the site without an appointment — but who did have a smartphone, was willing to link their test results to their Google account, and had an acceptable form of identification — still had to come back the next day, or the day after.

“The appointment process is a barrier. We know that most of the people in our community don’t even have a cell phone,” Hilliard said, and that they’ve been advocating with Verily to make changes. “Trust me, that’s what we want.”

Byron Wilson, a Tenderloin resident who lives in an SRO at the Cadillac Hotel, came to the COVID-19 testing site Wednesday for a walk-in appointment but was turned away. He said he wasn’t even thinking about getting tested until he read on a flyer that $10 Safeway cards were being handed out. He doesn’t have a smart phone so he’ll need to try to make an appointment online using a shared computer at the hotel.

“These are a lot of barriers for people to just get something that’s really basic and essential for their health,” said Supervisor Matt Haney, whose district includes the Tenderloin, and who toured the site Wednesday. “The whole point of having a site in this neighborhood was having a site so it was accessible and immediate, so people could walk up and be tested and sign up easily.”

Verily staff on site would not speak on the record, and the company did not respond to a request for comment.

“Nobody should be waiting in line for this. This is unfortunate,” Haney said. “I hope that they figure this out very quickly and we’ll work with them to figure out a better solution.”

Several medical professionals I spoke with were aghast when told a Google account was required to be tested at the Tenderloin site. “That is not equitable,” one said in disbelief, but did not wish to be quoted on the record.

“Seventy percent of my clients don’t have the skills or the resources to be creating online Google accounts to be tested,” said Alex Heer, a therapist and case manager at Hyde Street Community Services, which runs the Tenderloin Outpatient Clinic. “My perspective is definitely slanted towards the most vulnerable people, because that’s who I mostly work with.”

The Tenderloin COVID-19 testing site will be open 10 a.m. to 4 p.m. through May 24, and again next week from May 28 through June 1. Bring your smartphone. 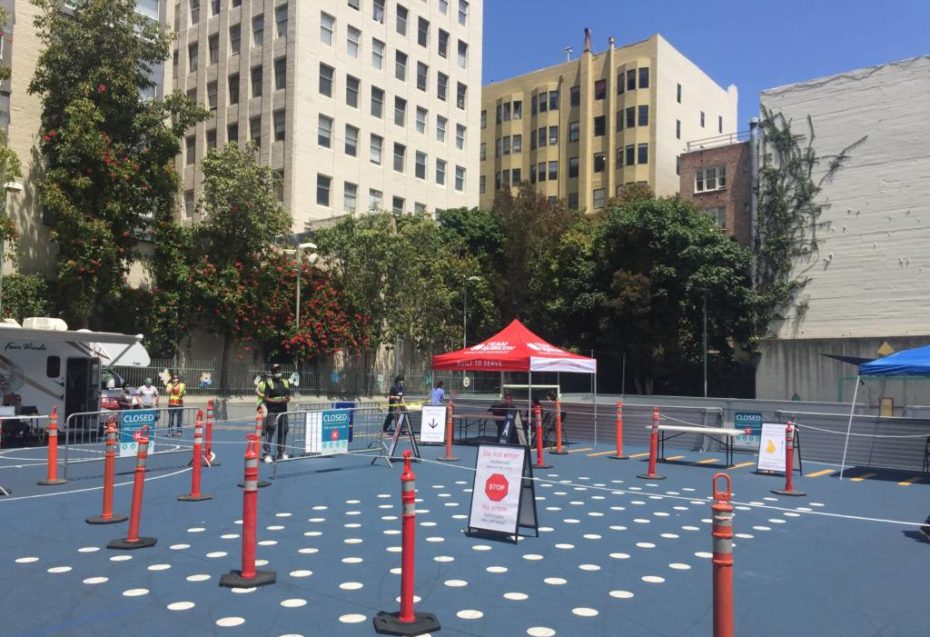 The COVID-19 mobile testing site at the Tenderloin Recreation Center on May 20, 2020. Photo by Michael Toren.

Four miles away, at the Hunters View housing project in the Bayview-Hunters Point neighborhood, was a very different scene. A COVID-19 testing site there operated by Bayview Child Health Center also opened for the first time Wednesday. But, unlike the Tenderloin site, both appointments and walk-ins were welcome. Registration was as simple as filling out a two-page form with pen and paper.

No one asked for identification — or a Google account.

This week they were open Wednesday through Friday but, starting next week they will be open each Friday from 10 a.m. to 4 p.m.  Simone Ippoliti, site director for Bayview Child Health Center, said she expected to test about 200 people this week.

Zeke Montejano — clinic operations director for South of Market Health Center, the parent organization of Bayview Child Health Center — said they try to remove as many barriers as possible.  To receive test results, clients can list a phone number or email address, or they can call or visit the office.  Clients can even list a street block where they can normally be found, and staff will try to locate them there.

“If you want to promote access to testing, you need to test where communities already are, and not ask communities to come to you,” Ippoliti said.

The Bayview location is also using a newer COVID-19 testing procedure, which is less invasive than earlier collection methods that placed a swab all the way to the back of the nose. That procedure has been described to me as unpleasant, but not painful. The new method, following updated CDC guidelines, only places the swab half an inch in the nose.

Ippoliti said the Bayview location also made a decision to test everyone, regardless of if they have symptoms.

“We understand that District 10, especially the Hunters View community, has a unique set of circumstances that don’t necessarily correlate with the current criteria for testing.  So, we are offering testing for anyone who would like a test,” Ippoliti said.

The Tenderloin testing site also was ready to test anyone, but that was not clear on the city website.

The city’s primary testing website, sf.gov/GetTestedSF, proudly proclaims at the top that, “anyone living or working in San Francisco can get tested.”

But further down, the same page states that essential workers working in the city — regardless of where they live — can be tested even if they have no symptoms, but other city residents only qualify if they have at least one symptom or have been in close contact with someone with COVID-19.

Increasingly, that guidance seems to be shifting so that testing is more widely available, and the list of symptoms is so broad as to include almost everyone.  It can include anything from a fever, to a cough, or feeling tired and sore.

“Those symptoms are very liberal,” Dr. Susan Philip, a deputy health officer, told the Board of Supervisors in April. “I don’t know of any of us that are not experiencing some level of fatigue at this moment.”

Through its laboratories and partners, the Health Department can analyze 4,300 specimens a day, she said.  That doesn’t include 1,500 tests a day that can be collected at two CityTestSF sites and processed by Color, a private lab.  It also doesn’t include tests by private providers in the city, like Kaiser Permanente, Sutter Health, One Medical, or Brown and Toland.

Despite all that capacity, Phillip said they were only testing about 500 people a day in April. Although that daily number has increased in May to an average of 1,125 tests a day over the last ten days, it’s still just a fraction of the available capacity.

Even worse, we don’t know what fraction it is based on publicly available data.

Veronica Vien, a Health Department spokesperson, said the testing number published by the department each day is the total number of samples collected throughout San Francisco, regardless of whether they are processed by public or private labs.  That means we can calculate the highest possible utilization rate, but the real rate could be much lower.

As an example, Vien said that on Wednesday, the two CityTestSF sites collected 982 samples. Those samples would be processed by Color, and not use the department’s lab capacity.

The gap between the number of samples collected and the city’s public lab testing capacity could be even larger today than it was when Philip addressed the supervisors in April.

A list of locations where you can be tested for COVID-19 can be found at sf.gov/GetTestedSF, or on the city’s interactive map.