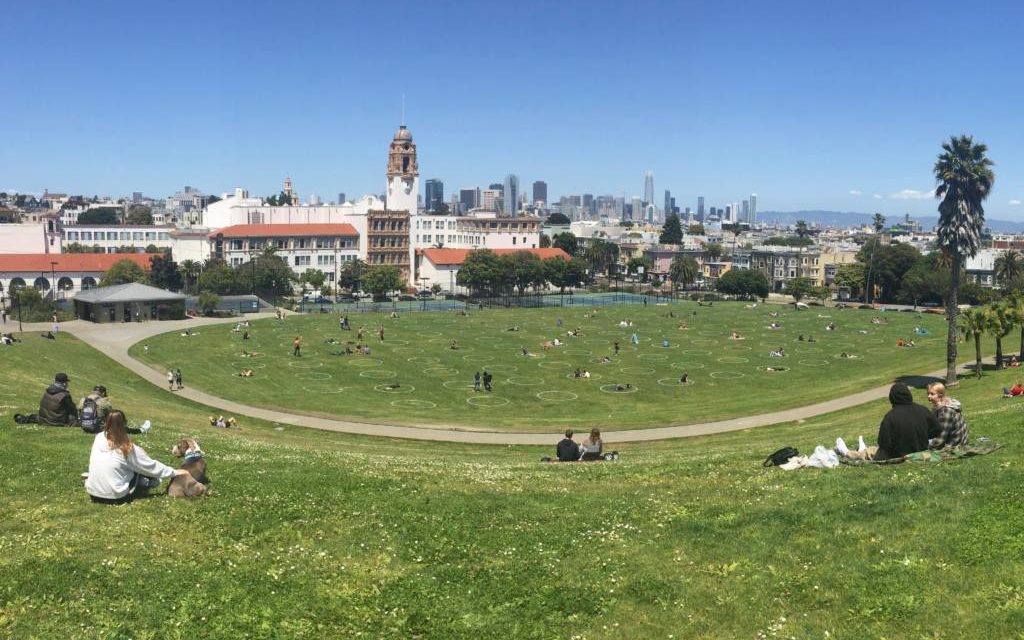 Ten-foot wide white circles, painted on the grass like markers on a soccer field, showed up suddenly at Dolores Park on Wednesday.  By Thursday afternoon, the reaction from many park visitors was somewhere between polite-neutral-indifference to tiniest-smidge-of-positivity.

“I think it’s certainly well intentioned,” said Jerry Cain, a computer science instructor at Stanford University who was playing ball with Doris, his 3-year-old dog. “I don’t know whether or not it will have an impact, but it’s a visual cue the entire time you’re here that you need to be social distancing. We can forget from time to time that we’re supposed to be doing that.”

Dolores Park wasn’t near full on a sunny weekday afternoon, and most people in that section of the park, next to the tennis courts, were using the circles to pick their spot.

“Wait until Saturday or Sunday,” said Dennis White, who came to the park to play guitar with his friend, Obo Help.

The weather this holiday weekend calls for sunny skies with highs of 73 degrees, which may once again draw crowds.

“I didn’t know whether to use them or not,” Help said. “At first, I didn’t even know what it was for — and then I figured it out pretty quick.  Then I just went straight for a seat.”  He said he prefers this part of the park because it’s flat and easiest to plant lawn chairs on.

“I don’t really know how much it’s helping, but like…. it looks like something, that might be helpful?” said Sadie Alan, with a laugh, who was sitting on a patch of grass away from the circles with Conner McNesby.  “I feel like at this point it’s a lot of calming people’s anxiety.  People are really scared, so that’s probably the important thing.”

They said they initially tried out a circle, but quickly relocated. “We sat in one, but it was wet,” Alan said.