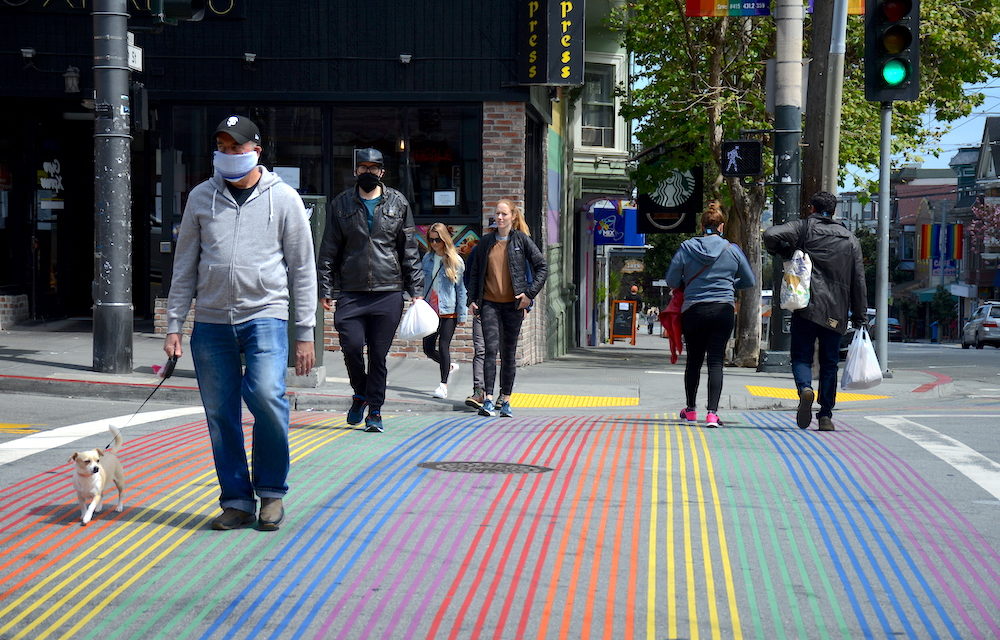 San Franciscans will now have to wear face coverings outside, while seniors and those with disabilities will be able to get a new transit card for highly discounted taxi rides, city officials announced today at the 1 p.m. briefing with Mayor London Breed and other top officials.

“Face coverings help to stop droplets that may be infectious, even if the person wearing the mask has no or mild symptoms,” said Dr. Grant Colfax, director of the Department of Public Health. “My mask protects you; your mask protects me.”

Colfax described the order as a precursor to reopening. “As we hope to be able to relax the stay-at-home order, by then people will already be in the habit of wearing face coverings,” he said.

Colfax emphasized that wearing face coverings is not a substitute to staying at home, practicing social distancing and frequent handwashing. He also reminded parents and guardians to not use face coverings for children under two years old to prevent any cases of suffocation.

In terms of updates on confirmed cases and hospitalizations, Colfax said that the first confirmed case in a jail was reported on Thursday. He did not provide which jail has the confirmed case. He also said that a “contact investigation is underway” to trace the inmate’s recent whereabouts.

As of April 17, Colfax reported 95 guest residents and 10 staff members at MSC South have contracted the coronavirus. While at Laguna Honda, the count remains at 19 confirmed cases — four residents and 15 staff — and no new cases since April 7.

As of the latest count, reported today, there are 1,058 confirmed cases from over 10,000 patients tested throughout the city.

Colfax said that “hospitalization numbers for COVID-19 positive patients have been holding relatively steady for the past week.”

Colfax reported that the city has 1,048 acute care beds, which is about 12 percent fewer beds since Wednesday, and 445 ICU beds available to meet demands of a possible surge.

Abigail Stewart-Kahn, the director of the Department of Homelessness and Supportive Housing, said that “there is no delay” in moving unsheltered individuals into hotel rooms on “a daily basis.”

“We have opened four hotels for the non-COVID homeless population in a very short period of time,” she said. “There’s another one opening today and we’re opening over the course of the next week in a rapid approach.”

Jeffrey Tumlin, San Francisco’s Director of Transportation, announced the “Essential Trip Card” for adults age 65 and over and for people with disabilities.

With SFMTA curtailing  Muni to 17 bus routes, Tumlin said that he is aware that this massive cut has impacted populations not covered by remaining bus routes in operation.

The Essential Trip Card “will subsidize about two to three round trips by taxi per month” or $60 worth of value, according to SFMTA. Eligible residents will only have to pay 20 percent of the cost of regular taxi fare and can apply by calling 311.

“If you have another means of making your essential trip, please choose to do so,” said Tumlin. He reminded residents that they want to make sure that frontline workers who do not have other means of transportation can take Muni without sharing the buses with many people.

“Do not engage in 420 activities in the city and anywhere else for that matter,” he said.

Scott said that Golden Gate Park will be closed and fenced off to keep people out.

Outside of 420 concerns, the police have given 9 citations to those who have violated shelter-in-place and social distancing orders.

Although the police are “still seeing some challenges with burglaries,” Scott said that they are seeing overall decreases in crime this month. He also reported a 25 percent reduction or 130 fewer property crimes this week than the week before.