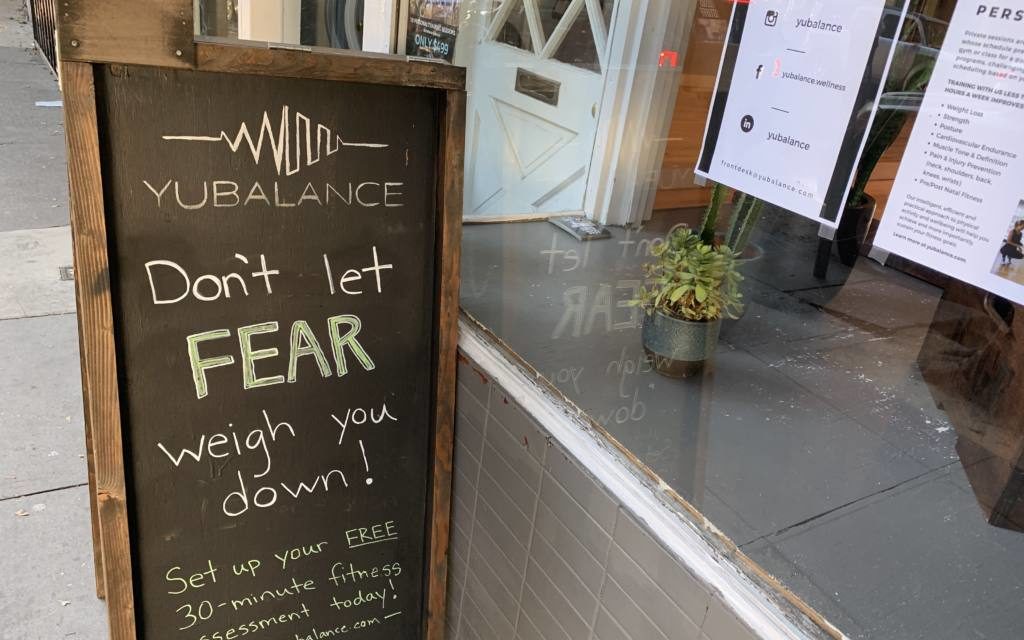 YuBalance was not weighed down by fear when it operated in its 24th Street space without permits for more than a year. Photo by Julian Mark

When Paloma Trigueros went into her backyard to set up for her sister’s birthday party early one October morning, much to her surprise, “it sounded like there was already a party” going on outside.

Just over her fence in the adjacent backyard, Britney Spears’ “Toxic” was on full blast and around a dozen people were doing high-intensity fitness training to the abrasive tune. They were members of the YuBalance Gym at 2860 24th St. near Bryant Street, which had moved into the building several months before.

Trigueros called over the fence to a woman leading the training, noting that it was 7 a.m. and her son was trying to sleep. The trainer, Trigueros said, argued that what she and the class were doing was perfectly fine.

But it turns out, it wasn’t fine — it was illegal.

After filing a complaint with the Department of Building Inspection in November, Trigueros and her father, Jose, discovered that this YuBalance Gym had not sought nor received permission from the city to use the backyard as a commercial gym. Moreover, the gym — which also has locations in the Sunset and the Richmond — hadn’t pulled a permit to use its indoor space as a gym, either.

The Trigueros family and their neighbors feel that building an outdoor basketball court without seeking community support — which is required — and moving into the building without a permit was brazen and disrespectful to the neighborhood.

“They don’t live here,” Jose Trigueros said. “They just come in, make their money and leave.”

“We have to live here,” Paloma Trigueros agreed. “We don’t work here — we have to sleep here.”

The father and daughter additionally accuse YuBalance trainers and members of the gym staff of taunting their dogs — and even tormenting them with a high-pitched dog whistle. Most of all, the dogs become distressed when staffers and gym members play basketball. Ball playing had not stopped even following November’s formal complaint, Trigueros and his daughter say.

Laura Rios, who runs Laura’s Beauty and Barber Shop next door to the gym on 24th Street, shares a backyard with it. She says gym management did not inform her they would be building a basketball court in a shared-use space. Before the court, Rios used the backyard as a place for her autistic son to play.

“They took the whole thing,” she said. She says she asked the gym’s owner, Rory Cox, who gave him permission to build the court: “He didn’t answer me — nothing.”

After multiple complaints about the gym, the Planning Department in February ordered it to cease outdoor use and gave it 30 days to obtain permits for indoor activities.

But on Monday, Planning Department spokeswoman Gina Simi said gym management “just informed staff earlier today that they would not be moving forward with the compliance process and plan to cease operations.”

“Our understanding is they aren’t moving forward with the entire gym,” she continued.

Jose Trigueros said he’ll believe it when he sees it. Or, rather, when he doesn’t hear it. “I gotta see it first that they go,” he said. “I don’t believe them — I don’t believe none of it.”

Even if the gym went, Trigueros bemoaned what he felt was an unfair process, accusing the Planning Department of dragging its feet in addressing what was clearly a violation of city code.

“When a homeowner does something wrong — they make you tear it down right away,” he said. “But these guys have been doing something wrong for over a year — and nobody did anything about it.”

Update 12:00 p.m.: Shala Cox, a co-owner of YuBalance, told Mission Local that the gym pared back its backyard hours after neighbors began complaining — and completely stopped using the backyard for classes around December. She and her husband, Rory, did not know they had to seek conditional use authorization from the city to use the backyard. She bemoaned an overly complex planning process and said that, as a small business, YuBalance did not have permit expeditors or lawyers to help them navigate it.

“It was never our intention to do anything illegal,” she said. “We thought we understood the planning code and clearly it’s way more complex than we could understand.”

Cox confirmed that YuBalance will be closing in its space. Without the backyard available for classes, she said, the location was simply too small, and getting authorization to use the backyard area would have been too long and draining on the business. Since they opened on 24th and Harrison six years ago, she said (the gym had since moved), “People have made it clear, we’re part of gentrification — they don’t want a gym on the street.”

“At this point,” she added, “we just want to leave as quietly as possible.”