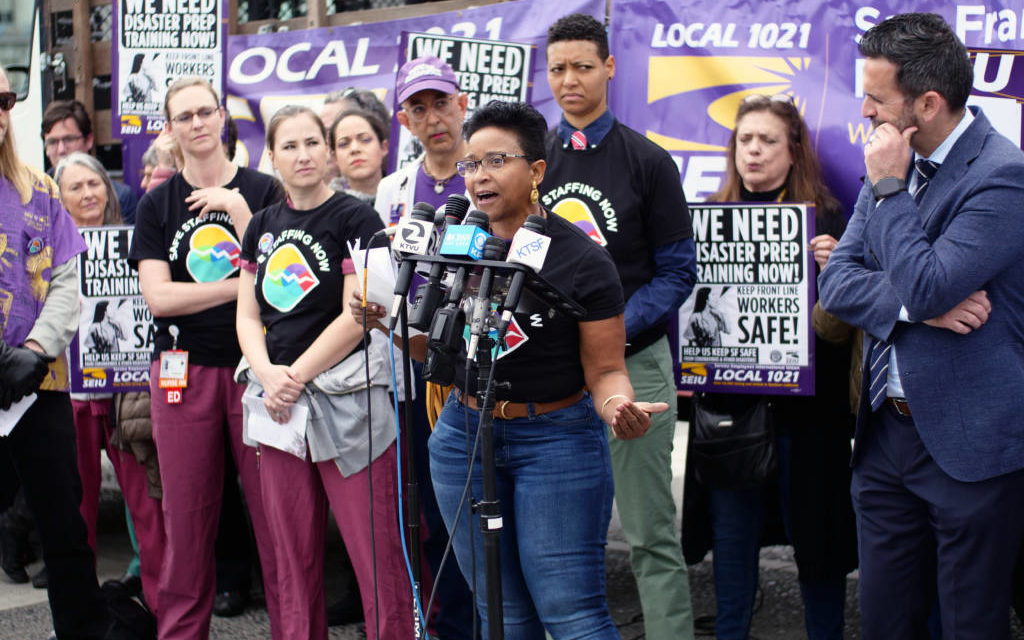 On Thursday, dozens of registered nurses, social workers, healthcare professionals and members of SEIU Local 1021 rallied in front of the San Francisco City Hall and testified at a Board of Supervisors hearing to once again echo the decades-long impact of understaffing and workplace violence at San Francisco General Hospital.

These all happened on the same day that San Francisco announced its first two confirmed cases of COVID-19.

“The city is in crisis, Coronavirus or no,” said Martha Baer, a registered nurse at General Hospital. “We are depleted. We are doing the work on the ground that is so important and very important to the values of this city.”

In addition to understaffing, the violence staff has experienced loomed large at the hearings.

Since Jan. 1, SFGH has had 34 reported assaults on staff, said ER nurse Christa Duran. SEIU Local 1021 representatives reported that 23 cases happened in January alone and that Cal-OSHA has opened investigations into multiple departments.

San Francisco General Hospital CEO Dr. Susan Ehrlich said that 86 percent of the reported crimes in the hospital are “patient on employee batteries and assault.”

“We have a multimillion-dollar contract with the Sheriff’s Department,” Ehrlich said. “They’re there to provide safety and security for us.”

Nurses makeup about 30 percent of the hospital workforce, but are terribly understaffed, according to the Department of Public Health. About one out of every 10 full-time nurse positions is vacant.

District 9 Supervisor Hillary Ronen said that there are 1,100 vacancies at SFGH alone. Public Health HR Director Michael Brown was not able to confirm the data at the hearing.

Nurses at the hearing said that because the hospital is understaffed, they are asked to take voluntary overtime because no one else can cover after their shifts. They also voiced concerns about getting little to no break time while working their 12-hour shifts.

Brown said that, as of November 2019, it took 165.5 days, or almost six months, to hire a new nurse at the hospital. That does not include the three-month process to get the approval of a vacancy before the Health Department starts hiring for a position.

He said that they are evaluating the step-by-step hiring process and identifying unnecessary steps and ways to expedite it. A process is underway that aims to hire registered nurses in 90 days or fewer after a job vacancy. The Health Department also plans to make the three-month vacancy approval process into a working list that shall be refreshed every two weeks. 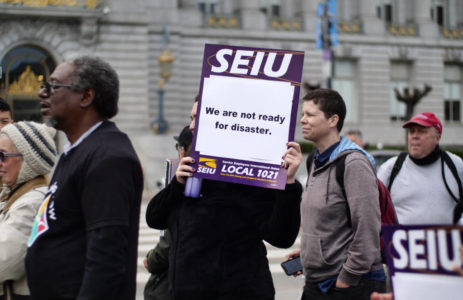 Nurses brought up more concerns that were not addressed at the hearing, especially on the lack of disaster preparedness training and opposition to Mayor London Breed’s 3.5 percent budget cut demand across all city departments.

“I understood that I was a disaster worker,” Duran said at the rally before the hearing. “When I was hired, I was told that if there is some kind of catastrophe, whether there’s an earthquake or some kind of disease is outbreaking in our city, I knew I was going to be required to come and help. And I took that job with a lot of pride in knowing that.”

“We all know that with any kind of disaster, we have to be prepared,” she said. “It concerns me that we have not had a disaster coordinator for over six months.”

“The mayor has stated very clearly in her budget plan that she wants to re-prioritize funds,” added Jennifer Esteen, psychiatric nurse at SFGH. “She said she wants to be responsive to residents to support city workers who are out there trying to make a difference and yet 3.5 percent budget cuts had been suggested.” 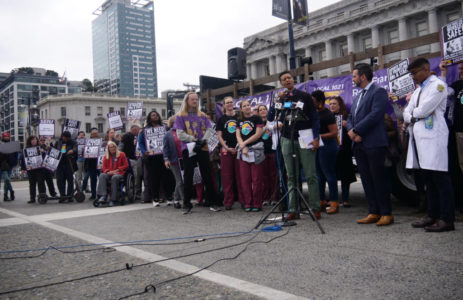 Esteen, alongside nurses at the hearing, said that the budget cuts should be stopped so that departments can address issues they are facing in providing care of the city residents.

“They may not be car repairs but they’re mayoral priorities,” she said, taking a shot across the bow of a mayor in hot water for allowing ex-Public Works boss Mohammed Nuru to pay for auto maintenance and a car rental.

District 11 Supervisor Ahsha Safaí called Thursday’s hearing after nurses came to one of the past meetings of the Board of Supervisors. He subsequently authored a resolution to address the nurses’ concerns.

“Not often do we see frontline nurses wearing their garb, coming from their jobs that will sit and wait in line to speak at public comment for an hour,” he said.

Safaí said that this is the first of many hearings that the supes will undertake to address issues on slow hiring and workplace safety of nurses at General Hospital.

“It’s about making sure that we have the resources, we have the training, we have that skill sets so comfortably ingrained that when you show up at the door, the focus is all about you,” said Heather Bollinger, ER nurse at General Hospital.

Following the announcement of two confirmed cases of COVID-19 in the city, Lowell High School and Presidio Hill School both closed Thursday as a precaution. 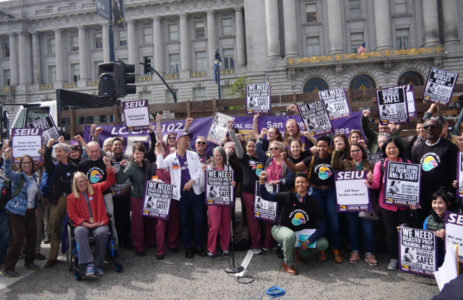 Nurses and allies come together for a rally before testifying at the first hearing to address concerns over understaffing and workplace violence amid the Coronavirus outbreak. Photo by Loi Almeron.