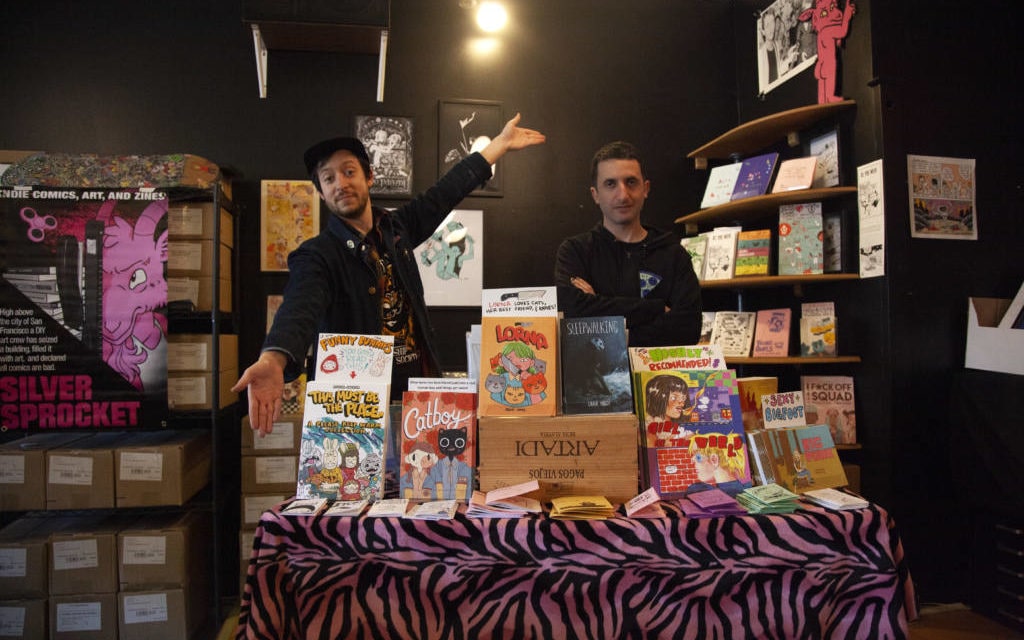 “Like, nothing’s permanent — ever — anywhere in the entire world,” Ehrlich said on a recent Thursday. “Like, nothing is forever.”

That’s true, and the 37-year-old Ehrlich is proving it again. After two or so years on Haight Street, Silver Sprocket has yet another home. This time, it’s inside 1-2-3-4 Go! Records, at 1038 Valencia St. near 21st Street, filling about a third of the space with its independently produced comic books.

“We did move in here kind of fast and dirty,” said Silver Sprocket’s general manager Josh PM Frees, “but we have a lot of plans over the next few weeks” to build out the space.

Silver Sprocket describes itself as a “radical indie publisher, art-crew, gallery, and comic bookshop” that specializes in publishing the work of independent comic artists and building “a better world through direct empowerment and activism, without taking ourselves too seriously or forgetting to have a good time.”

For a time, it operated out Ehrlich’s house on Valencia Street, which Ehrlich, a South Bay native, bought 10 years ago to renovate, and where they still live.

Silver Sprocket has published titles like Your Black Friend and Other Strangers by Ben Passmore, an award-winning comics collection and “a really important read for white people,” Ehrlich said — as well as Magical Beatdown by Jenn Woodall, which Ehrlich describes as “a hyper-violent street harassment revenge fantasy in the style of Sailor Moon.”

“Marvel or DC couldn’t publish what we do,” Ehrlich said, holding up some of the titles.

Indeed, Sliver Sprocket is part of a recent wave of “mission-driven” micro-publishers “working hard to try to address some of the challenges that we’ve seen in the industry,” PM Frees said.

“We just want this world to be better for everyone,” Ehrlich said, noting that their dream for the comic store is one day to become like the Hard Rock Cafe, where “the shittiest dad rock is on a beautiful pedestal with, like, a wonderful spotlight and everything.”

“I want to do that for indie comics,” Ehrlich said, though without the food and cheesiness. “Like, being accessible and fun and community-oriented.”

Ehrlich and PM Frees said they’re both happy to be furthering this dream on Valencia Street, in close proximity to like-minded spaces like 826 Valencia, Mission: Comics & Art, Needles & Pens, and another recently opened mission-driven comic book shop, Hella Novella, which focuses on comics by women and people of color.

And in the Mission District, Ehrlich said the customer base will be welcome. The Haight-Ashbury was a “Summer of Love Disneyland” with a lot of tourist foot traffic and not many locals. And while, yes, Valencia Street is a “kind of Disneyland for soccer moms with yoga mats,” Silver Sprocket exists inside a record store, and Ehrlich expects more neighborhood folks will stop in and browse.

Nothing is forever, according to Ehrlich, but they said the comic book store will, at the very least, stick around on Valencia for the next couple years, until the end of February 2021, when its lease ends.