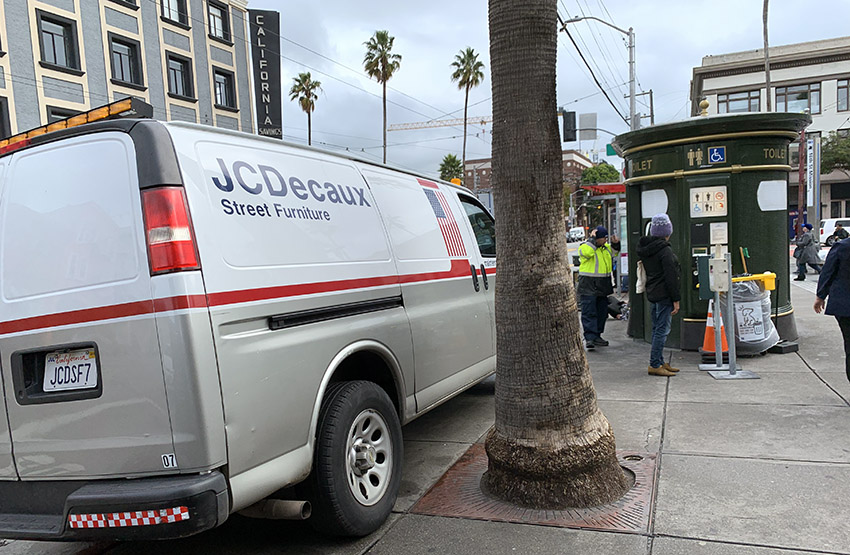 Multiple sources have confirmed to Mission Local that a long-running toilet and kiosk contract with JCDecaux — lamented by city officials as one of the nation’s worst — is under review by the City Attorney and controller in the wake of Public Works boss Mohammed Nuru’s arrest last month on fraud charges.

The Public Works contract involves the ubiquitous army-green toilets located throughout the city. A pact with French transnational JCDecaux for self-cleaning toilets sporting ads was sealed all the way back in 1995 under Mayor Frank Jordan. Willie Brown decried it as a “giveaway” during his subsequent campaign vs. Jordan, but later sang its praises, expanded it and locked it in place for decades — after visiting JCDecaux officials in ’96 for a decadent French jaunt in which he was lavished with a helicopter ride.

JCDecaux is a company with quite a knack for, quite literally, wining and dining its public clients. Mission Local wrote last year about the elegant waterfront farmhouse in the bucolic Parisian suburb of Plaisir at which the company receives dignitaries; Brown visited, as did Gavin Newsom — and, we’re told, Nuru was a guest as well.

Data that Public Works sent to Mission Local last year reveals that JCDecaux amassed some $125 million in ad revenue between 1997 and 2017 — but, per the terms of its contract, only paid 5.8 percent of that to the city ($7.3 million). To put that in context, the outdoor advertising deal the city signed with Clear Channel for Muni shelters requires the company to hand over 55 percent of its ad revenue. The deal the city inked with Titan Outdoor for Muni vehicles mandates the city receive 65 percent of the ad revenue.

“There is no question that JCDecaux took the city of San Francisco on a long walk off a short pier,” Supervisor Aaron Peskin told us last year. “The bottom line is, there is no city in America, or the world, that got such a bad deal as we did with JCDecaux 20 years ago.”

And yet, when Public Works in recent years put up this contract for renewal, nobody even bothered to bid on it but JCDecaux. How does that figure?

Well, an initial 2015 Request for Proposal shared with JCDecaux’s would-be competitors offered them the de-facto impossible timeline of 120 days to individually permit and install dozens of free-standing outdoor toilets.

In 2016, the city altered these terms — but imposed new conditions that deeply favored JCDecaux. To wit, it minimized the singular element any competitor could use to unseat the incumbent — offering the city more money. This was reduced from 65 percent of the judgment criteria to only 20 percent.

At the same time, the city increased the importance of the “oral interview” with Public Works bosses — or, in French, l‘entretien oral — from 5 percent of the judgment criteria to a whopping 40 percent.

In the wake of public corruption allegations against Nuru, it’s worth unpacking the above (and the City Attorney and controller will do even more than that).

Among other accusations in the lengthy complaint vs. Nuru and his right-hand man, Nick Bovis, are charges that the Public Works boss essentially bid-rigged a bathroom and homeless shelter contract to steer it to Bovis.

When you consider JCDecaux’s mastery of enabling its public clients to live the good life and when you consider allegations that Public Works boss Nuru could be plied with such offers, it’s little surprise this contract is now being flagged.

The city’s stated terms in this contract minimized the money or services JCDecaux’s competitors could offer and maximized the input of Public Works insiders (who may or may not have visited that farmhouse). Those competitors certainly took the hint at the time; none bothered to put in a bid.

Mission Local is told that an undisclosed number of contracts other than this one are being reviewed by the City Attorney and controller.

City Attorney spokesman John Coté declined to go into specifics. But he did send us a general statement: “The San Francisco City Attorney’s Office has begun a thorough investigation. We will follow the facts wherever they lead. This office’s track record of independence is unparalleled, as is our work investigating abuses of the public trust.”