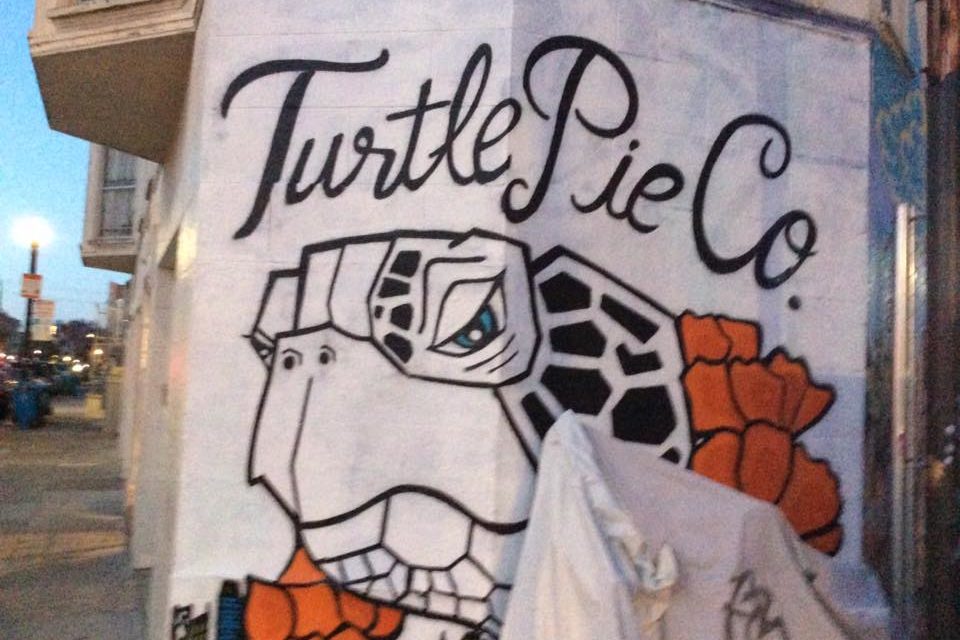 Laura Campos took this photo of the “Turtle Pie Co.” ad on Tuesday evening — which completely erased her longtime mural.

When Laura Campos was walking home Tuesday night, past the corner of 24th and Capp, she noticed something was wrong — very wrong.

A mural she had painted on that corner some 10 years ago, called “Alien Love,” was completely painted over with a white background, a giant turtle’s head, and the words “Turtle Pie Co.” It turns out to be the logo of a cannabis and clothing distributor.

“I was very upset to see that someone painted over my iconic mural,” Campos said, noting that she’s had to clean graffiti off of it in the past. But never something like this.

So Campos returned on Wednesday to 899 Capp St. to take the ad off her mural, which had been commissioned by the building’s owner in 2010, and begin the process of repainting it.

The trouble wasn’t over: A “man came to investigate me and film me; he asked why I was painting over it,” she said.

Regular readers who have not yet donated, it’s time. Original reporting is not free and disappears without support.

She informed him that his ad was illegal — and that she had received permission to paint her mural many years before.

“Get over it, bitch — your time is up,” Campos recalled the man saying. “You already had this mural for 10 years.”

Campos said she reminded the man, who did not identify himself, that murals are not temporary, and they’re an essential part of the neighborhood’s culture and history. “We don’t paint commercial murals!” she recalls saying. “Especially on top of iconic murals!” 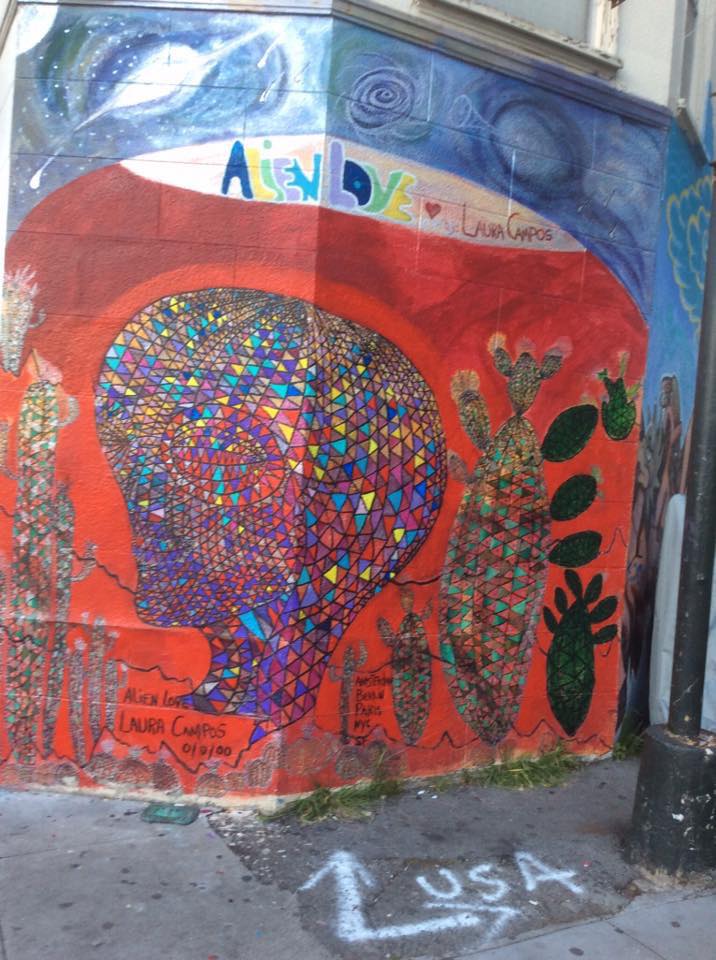 “Alien Love” had been featured on the corner of 24th and Capp streets for ten years.

That man left, Campos said — but another man showed up 10 minutes later. Campos alleges that the second man began kicking and throwing her art supplies, repeatedly calling her a “bitch.” He threw her brushes and paint in the trash, she alleges, and attempted to strip a paint roller out of her hands but was unsuccessful. He also kicked her purse across the street, she said, breaking her iPhone and iPod.

“He made it seem like he was going to kick me if there were no people,” Campos said, noting that the man told her he “got paid a lot for this mural.”

“He made a lot of threats to me and totally abused me for 15 to 20 minutes,” Campos added. “I’m afraid to walk down the street. He told me to watch my back — like a thug.”

Campos said the man would not give his name when she asked, but she managed to take a photo of him. It’s unclear if the man was associated with the Turtle Pie Co. Mission Local reached out to the company through its Instagram page (its only web presence), but has not yet heard back. 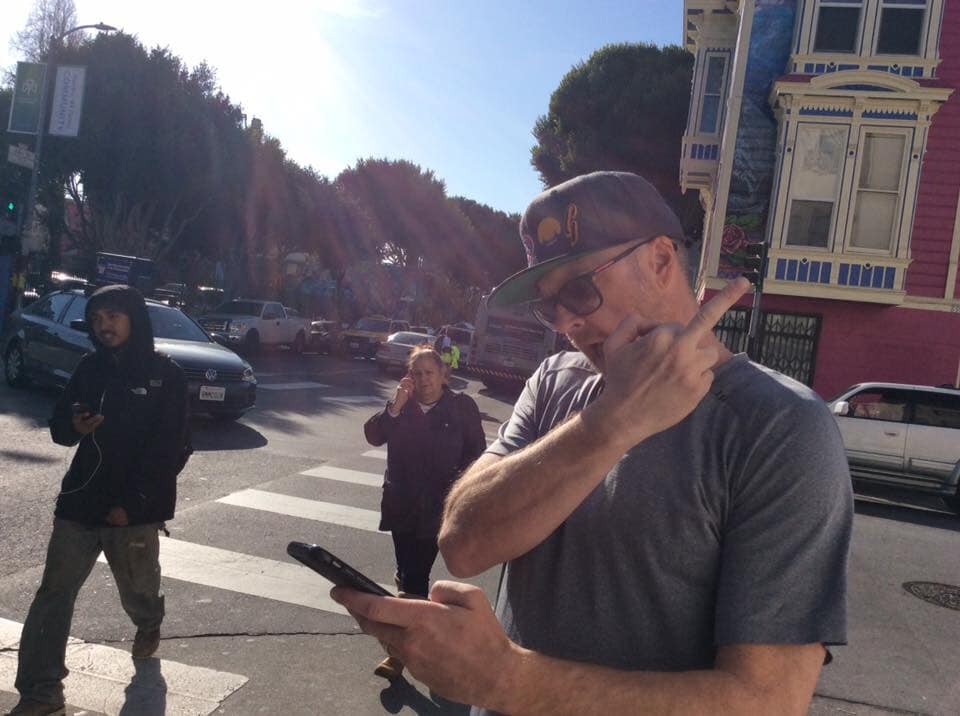 Campos alleges that the man in this photo harassed her, kicked her belongings and called her a “bitch” when she tried restore her mural.

Turtle Pie Co. does not appear to be a legitimate cannabis distributor or “Prop 64 compliant,” as its Instagram page suggests. None of the packaging displayed on the page has state-mandated labeling, such as the “universal symbol” indicating that weed products are contained within, nor do they display weight and volume specifications.

It does not appear to be a licensed distributor in major Bay Area counties, such as San Francisco, Alameda, San Mateo, Contra Costa, or Santa Clara, according to state records.

Nevertheless, the Turtle Pie Co. logo emblazoned on Campos’ mural — and the ensuing purported harassment — has left Campos traumatized. “I was really afraid for my life,” she said. “I thought he was going to hurt me.”

A former property manager at the building, who requested we only refer to him as “John B.,” as he feared being targeted by internet trolls, said that he remembers the building’s owner giving Campos permission to paint a permanent mural on the wall in 2010.

Janis Brown of Fadcal Property Management, the current property manager of 899 Capp St., said that she did not give Turtle Pie Co. permission to paint over Campos’ mural. “Absolutely, not under any circumstances, would I do that,” Brown said.

“This is upsetting,” she added. “We love that mural.”

Mission Local previously reported that the owner of the building is Evelyn Cornell. She had Campos paint a mural there 10 years ago following a prior piece’s controversial whitewashing.

Since then, John B. said, Campos’ “Alien Love” mural has been a starting point for many mural tours in the neighborhood and is beloved. But now, Campos said, she has to completely repaint it and does not have the money to do so. It’s now a blank white wall.

“I’m not backing down,” she said. The men who allegedly harassed her are “not going intimidate me in my own neighborhood.”

Update 4:20 p.m.: Turtle Pie Co. has taken down its Instagram page since the publication of the article, though its apparel site still appears to be active.