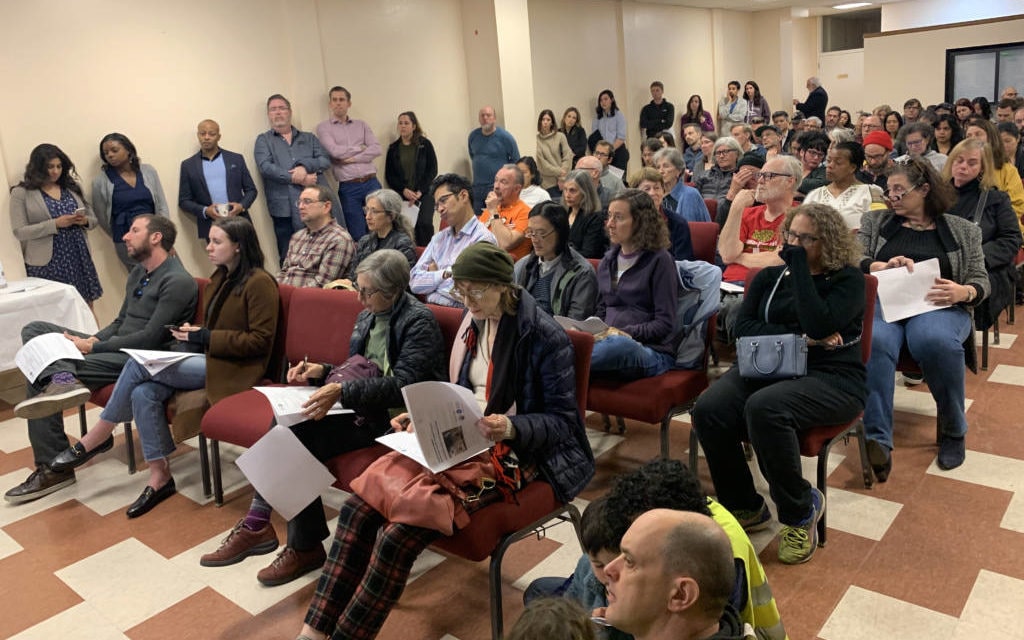 Residents at the community meeting to discuss a proposal to open a community Hummingbird on Valencia St. Photo by Loi Almeron.

Frustrated neighbors packed Monday’s community meeting to discuss a proposal to convert the vacated Salvation Army location on Valencia Street into a Hummingbird Place, a 24-hour behavioral health respite center for homeless people, for the next three to five years.

“I find it shocking that I’m hearing about this today,” a resident named Kristen said. “Why the hell weren’t people in this neighborhood informed of this?” She added that she only found out about the proposal through the neighborhood app, NextDoor.

About 120 people attended the community meeting at 1156 Valencia St., spearheaded by the Department of Public Health. The meeting is part of the city’s process to move forward with its proposal to lease the property owned by The Salvation Army and turn it into a 30-bed community Hummingbird.

“I don’t think anyone in this neighborhood disputes whether or not this is a good program,” Kristen said.

“I came here excited,” one resident said. “But you’re not here to address our needs.”

Instead, residents made it clear that they felt the department was pressing a big proposal on them without adequately informing them of what was going on ahead of time.

Even after The Salvation Army, PRC/Baker Places, and the Department of Public Health presented on the behavioral health respite program, the room was filled with confusion, especially after community members found out that they are only being given three weeks to share comments and concerns regarding the proposal. That proposal will be presented at the Health Commission meeting on March 3.

“This is shameful,” another resident said. “You didn’t give us enough time for this.”

District 8 Supervisor Rafael Mandelman introduced a resolution last week to approve to authorize the Department of Public Health to lease the Salvation Army property for $404,000 per year for a three-year term, with the possibility of two one-year extensions.

The Department of Public Health plans to open the Hummingbird Place later this spring.

According to the Department of Public Health’s presentation last night, 370 people are experiencing homelessness in District 8, as of its January 2019 point-in-time count.

In Mayor London Breed’s 1,000-shelter-bed initiative this year, there are currently no shelter beds available or planned in District 8. This psychiatric respite, however, is on the border of District 9, which includes many of the city’s resources for the homeless.

“If we’re actually gonna solve this, we’re gonna have to find not just this,” Mandelman said. “This is not the last [District 8] spot.”

As the property lies close to the border of District 9, some residents said that there seems to be a lack of “due diligence” to inform and include District 9 in the planning process.

Kelly Hiramoto, project manager from the Department of Public Health, said that the respite center will prioritize referrals of homeless residents who are from the neighborhood. She also clarified that the center is for clients with behavioral health diagnoses who need a place to contemplate whether they want, or are ready, to enter into treatment and receive care.

“This Hummingbird intervention is something we know works,” said Dr. Mark Leary, a Mission resident who is also a psychiatrist working at the Psychiatric Emergency Services at San Francisco General Hospital. “We know that it allows us to engage people that are afraid to come into services and take that first step. It’s not easy but it’s been successful.”

Aside from feeling like they could have been “involved sooner,” another big concern that residents raised was on safety and security.

The proposal stated that it assures the community of a “24/7 on-site security” and that clients will be “escorted in and out” of the facility. It further includes a partnership with the San Francisco Police Department and a hotline for neighbors to report any onsite issues.

But residents worry about security outside the facility, citing instances of encampments and drug deals in the neighborhood.

Officials at the meeting told residents that crime generally decreases “around areas where facilities like this exist.”

Some residents shook their heads in disbelief.

“Could you share that data with us?” some asked. Officials from the Mayor’s Office said they will share the data to the public.

(Note: Officers from the Office of Mayor Breed was speaking of decrease in crime around Navigation Centers, which Hummingbird isn’t. “The comparison to the previous Hummingbird site is made even more difficult given that the previous site is operated out of SF General Hospital,” according to Andy Lynch, deputy communications director at the Mayor’s office.)

Mandelman said that at least one more community meeting about the proposal will be held before it is presented at the Health Commission meeting on March 3.