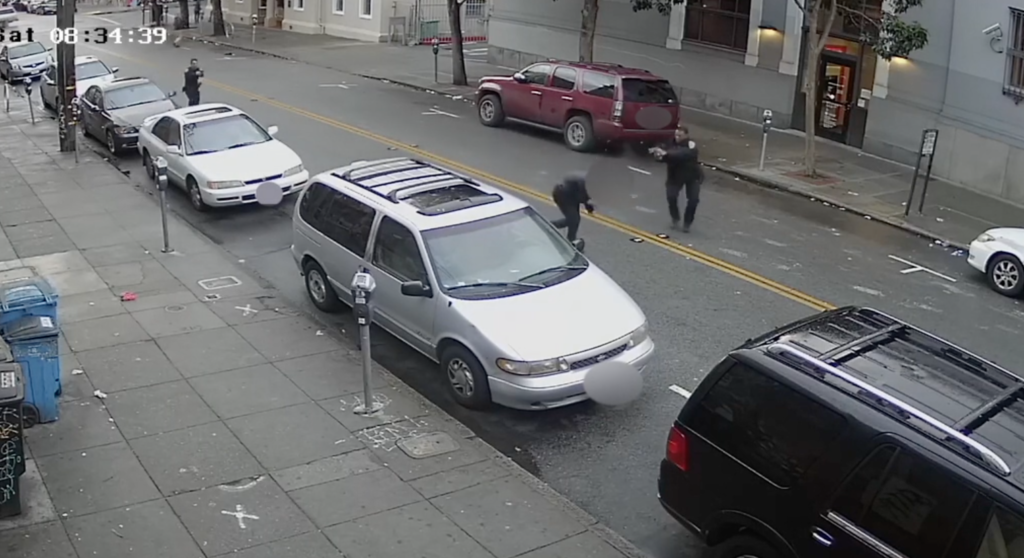 San Francisco police union president Tony Montoya’s call this morning for federal prosecutors to file charges against a man caught on video striking an officer with a bottle prior to being shot three times and losing a leg confounded legal scholars consulted by Mission Local.

It additionally comes as Montoya’s runoff election to remain atop the union commences.

DA Chesa Boudin on Friday withdrew charges against Jamaica Hampton, who on Dec. 7 was shot three times by SFPD officers on Mission and 23rd and subsequently had his left leg amputated. The charges were withdrawn “without prejudice,” which means they can be refiled at the District Attorney’s discretion during the next three years.

Boudin’s professed rationale was that he first wished to conclude investigations into the officers who shot Hampton before proceeding with the case against the 24-year-old former homeless man.

“It would be problematic to ask the officers to testify while they are under investigation,” Boudin told the San Francisco Examiner on Saturday.

The POA bundled some $700,000 in a losing effort against Boudin’s election, and his explanation for dismissing charges was not well-received by the police union, which held a press conference today calling for the feds to intervene.

“Mr. Boudin has made it clear to criminals everywhere that you can violently attack a police officer and he’ll look the other way,” Montoya said today. He earlier sent Boudin a letter claiming that the failure to move forward with the prosecution of Hampton “sends a message to every suspect that it is perfectly acceptable to physically assault an officer to get away with your crimes.”

Whether “every suspect” will look to Hampton — who still has potential charges hanging over him for the next several years and remains hospitalized with an amputated leg — as an example of someone getting off easy is a debatable proposition.

But a number of officers contacted by Mission Local confirmed that the anger expressed by Montoya and his cohort was not feigned.

While Boudin has years to refile the charges, officers we spoke to were unmoved: “He won’t. He won’t,” said another longtime cop. “It’s a kiss-off.”

Those officers — and others — also viewed Montoya’s  splashy press conference today through a political lens. Per Police Officers Association materials, online voting commences Jan. 27 for a runoff election to decide the next president of the union.

Montoya, the sitting president, only managed to wrangle 49.1 percent of the vote earlier this month, with challenger Sgt. Rich Cibotti clocking 48.2 percent.

A majority is required to declare a winner; the runoff, which will conclude on Feb. 1, will determine the victor. Montoya and Cibotti will debate each other on Tuesday evening at the Police Academy in an event open only to active POA members.

Cibotti is backed by ousted former POA president and consultant Gary Delagnes, who has portrayed Montoya as soft and ineffective.

Montoya was not soft in his treatment of Delagnes in February 2019, when he, in essence, terminated him from his consulting position after Delagnes published a broadside against recently deceased public defender Jeff Adachi on his Facebook page.

While Montoya’s call for federal intervention may resonate with offended cops and boost his election prospects, it did not have the same effect on legal scholars consulted by Mission Local.

“I can see why police would be thrown off by this and looking around for a higher power to help them,” said Hadar Aviram, a law professor at U.C. Hastings. “But for that to happen, you’d have to have a theory as to why what happened constitutes a federal crime.”

There are broad swaths of San Francisco that are federal land — but Mission and 23rd, where Hampton was shot, is not among them.

“If we’re talking about municipal police and non-federal land, I’m not sure what the federal offense would be,” she continued. “I’m not sure under what theory the feds would be stepping in.”

“I have spoken with the District Attorney and he made it clear that the investigation into all the circumstances and facts surrounding the incident must be resolved before any decision to file charges can occur to avoid any conflict of interest,” reads the email from the mayor.

“I firmly believe there should be an investigation into the shooting that happened. That said, our Police Department has worked diligently to implement reforms to reduce officer-involved shootings and to be more transparent with the community. … You deserve to know that when you do this work on behalf of the people of San Francisco, that any act of violence against you will be met with firm resolve.”