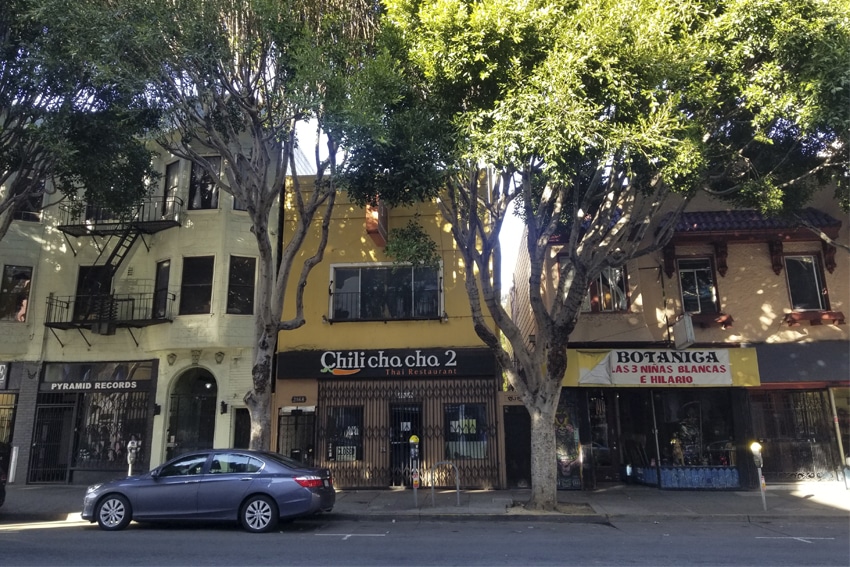 Ficus trees and their canopies on 24th Street. Photo by Abraham Rodriguez.

Residents and business owners along 24th Street are vowing to make their stand at an upcoming city hearing, as they aim to keep dozens of ficus trees from being cut down in what could be the final chance to save them.

The ficus trees lining 24th Street from Mission to Potrero Ave. have a group of admirers who say they add to the neighborhood’s character and they would hate to see them get cut down.

“I’ve lived here for 30 years. To me, it’s part of the neighborhood’s identity,” Ricardo Peña said.

Peña is the co-owner of Mixcoatl, a jewelry and art store at 24th Street and South Van Ness Avenue, who has lived in the Mission most of his life. He said he had not received any notice about an upcoming Board of Appeals hearing on Jan. 8 to decide the fate of scores of ficus trees — but he now plans to make his voice heard at the meeting.

He said that the trees do a lot for the neighborhood, such as providing shade, cleaning the air, and making the business corridor feel different compared to other neighborhoods. Removing them would be a massive blow to the neighborhood, he said, and he’s not alone.

Since 2018, opposition to San Francisco Public Works’ proposed removal of the 45-year-old ficus trees has pushed the innocuous proposal to the final debate, a Jan. 8 appeals hearing where the fate of some 100 or so trees will be discussed.

The hearing, set to commence at 5 p.m. in room 416 at San Francisco City Hall, will decide whether or not some 70 ficus trees, which city arborists say are a potential public hazard, should be removed. Yet most folks along the 24th Street corridor contacted by Mission Local had no idea the meeting was even taking place. The hearing had been originally scheduled for November 2019.

The fight for 24th Street’s mature trees began in 2018 when the city posted notices saying that it intended to cut down the ficus trees. The city has reassessed the wisdom of planting ficus trees in an urban setting; the branches are prone to falling and the trees can fall victim to infestations. Several 24th Street residents and property owners have complained to the city as the tree’s roots burrow under their property. The trees’ roots have also begun to make the sidewalks buckle as their roots spread out.

“The trees that look the greenest to the public are, unfortunately, often the ones that are the least structurally sound,” city forester Chris Buck told a group of Mission dwellers during an April 2019 walking tour and community meeting.

At that time, Buck described a plan to replace many of the ficus trees towering over 24th Street with red maples and ginkgoes, two species with less aggressive roots and a lighter canopy, to let more light in. He said the city had, additionally, secured dedicated funding for regular tree maintenance — something that had been a problem in the past.

Defenders of the ficus trees, like Luis Gutierrez, noted the city hadn’t done a proper job of maintaining them through the years. Gutierrez has lived on 24th Street his entire life and helps run his family’s bakery, La Reyna, between Shotwell and Folsom on 24th. Gutierrez said he seldom sees any crews maintaining or cutting off limbs from the trees.

“There’s a lot of places where they could just easily repair the street,” Gutierrez said. “The streets are manageable. I don’t know if, just because the sidewalks are buckling, that is reason enough to kill something that is 40 years old.”

Gutierrez led a campaign last May to tie ribbons around many of the ficus trees on 24th Street, but city workers kept taking them down, he said. Eventually, after replacing them about two more times, they left them on.

Further down the block at Adobe Books, Jon Fellman agreed with arguments made by Gutierrez and Peña — the trees aren’t a nuisance. Fellman is one of the volunteers at Adobe Books, which now operates as a cooperative, and said he had not even heard there was a new hearing planned. He only knew of the city’s original plan when Gutierrez posted flyers all over the neighborhood last year.

But Fellman agreed with the others.

The Jan. 8 appeals hearing could be the final say on the matter.