Distillations: Life’s off the hook at The Phone Booth 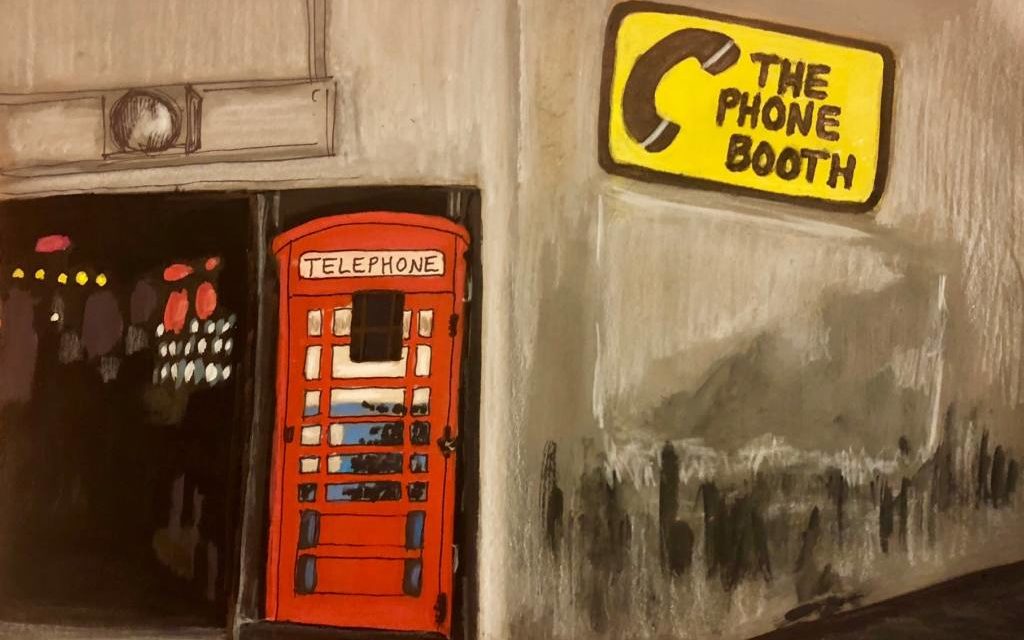 I walked into The Phone Booth on South Van Ness and 25th on a dark and cold night, expecting it to be … well … the size of a phone booth. It is not. By the standards of a bar in the Midwest, it would be small. By the standards of a dive bar in San Francisco, it’s small, sure — but, anyone who’s gone bar-hopping in the Mission has felt more closed in.

It’s just big enough to include a bar, five small tables, a pool table, and an ATM. It’s dark, with a TV on each side of the bar (one silently showing football that night, the other turned off). It’s a lovely dark ambiance, lit mostly by Christmas lights and a series of light fixtures that, upon second glance, were head-spinningly artsy and very cool.

The Phone Booth felt especially spacious that night because there were only four other guys there, including the bartender, and for some reason they were all huddled on the far side of the bar, as if they were being pressed together by a large crowd and were forced to lean in and speak up to be heard.

Literally nothing else was happening.

I sat down. Eavesdropping was easy. They were talking about people they had known who had worked at the Twin Towers — most of whom had left just in time to avoid catastrophe on 9/11, like a pastry chef one guy knew. But some of them hadn’t. One guy’s cousin left his job at the Towers and then got a kid he knew to replace him. That kid is gone.

Is jumping out a skyscraper window to avoid burning to death giving yourself “a chance?” A heated, mercifully brief, argument ensued. I asked if they have any mixed drink specials. They did not. A 7&7 sets me back $8. He poured it heavy.

I checked back in with the guys, who were now talking about one guy’s visit to the Towers. And how intense the movie Man on Wire was, about tightrope walker Philip Petit, who walked across the empty space between them in 1974.

“How did we get on this?” One of them finally asked. “How did we end up talking about THIS?” They tried to trace the conversation back. Apparently it all started with pie recipes. Seriously.

It felt like I’d mistakenly walked into a private club. “Who’s gonna drive you home tonight?” the music asked. It was background pop songs all the way tonight.

The guys changed subjects. “I woke up at 3 in the morning, had to use the bathroom,” one said. I tried to pay attention to something else, and realized that a fourth guy had walked into the bar, joined the group, and somehow I’d missed it. He, too, was sitting in with them as though they were a tight little group that had to make a point of protecting their space from intruders. Like they were drawing a line around their territory and only the guys inside it were part of the gang.

But something had changed, or rather, something hadn’t. There were four guys now, but they were still clustered in a group of three, loud whispering to each other, while the guy at the farthest edge, closest to me, seemed to be on the outs, not participating or included in the conversation. Instead he was watching the game on the TV with its sound turned off, occasionally remarking on the plays that happened. No one responded.

A woman came in, used the ATM, and left. A hidden phone booth in the front garden of a home on Harrison near 24th St.

What is it with this bar and people? I was asking myself, when suddenly a second group of three people — two women and a guy — walked in. The bartender greeted them all by name. They clustered amongst themselves on the other side of me from the first group, and started having their own loud whisper conversation.

A moment later, a man and a woman walked in and sat down.

It was like a switch had been flipped. Suddenly the place was hopping, filled with chatter. But it still felt oddly like I was crashing a private club.

“This is the first time I’ve been here,” the man in the pair said.

“Really?” The woman asked. “I’m the first one to show this to you?”

“Well,” he said, clearly embarrassed, “maybe I’ve been here before once.” He clearly hadn’t, and was trying to regain status.

“Has ‘Lydia’ been here?” A guy in one of the new groups asked the group that was here when I arrived. And just like that, communication between groups on opposite sides of the bar was happening.

“No,” one of the first guys here said . “Her broomstick broke down over Miami. But she has a good repair place, she’ll be here soon.”

More people came in. Space was at such a premium in now that people started sitting at the tables rather than the bar.

To my right, the original group was talking about a guy returning screws to a hardware store. Apparently he was an asshole.

A guy to my left was bending the bartender’s ear. An older guy, who spoke really fast. “I’ve been writing poetry,” he said. “What the fuck is wrong with me?”

I’d recently been writing poetry too, actually, but I had the good sense to keep quiet about it. Someone mentioned the TV to the bartender, and he looked over at the only guy in the bar who had been paying any attention to the game. “Is this done?” the bartender asked.

The bartender got out his remote to turn the TV off.

“Wait!” said the older guy who had been talking to him. And he got out a remote he apparently has been carrying with him, and quietly keeping in his pocket all this time, waiting for this moment to demonstrate that his clicker will also work on this TV.

“Go ahead. Your device is better than mine,” he finally said, defeated.

The bartender turned the TV off. No one else noticed.

This was a weird little world I’d walked into. I liked it.