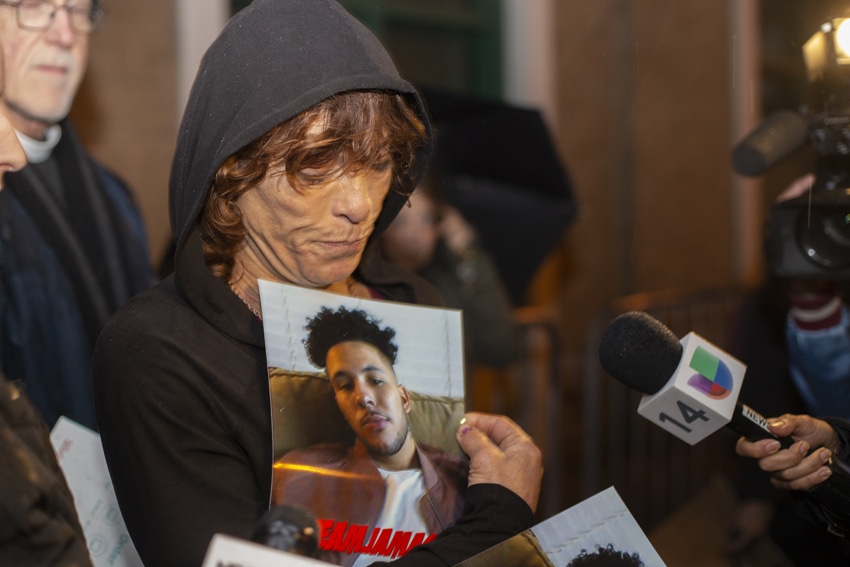 Tana Hampton holds a picture of her son Jamaica, who was shot on Saturday morning near 23rd and Mission St. Photo by Abraham Rodriguez.

A woman who said she is the mother of a man shot in the Mission district this weekend by San Francisco police made an open plea to the San Francisco Police Department: She wants to see her son.

The woman, Tana Hampton, said her son, 24-year-old Jamaica Hampton, is the man shot multiple times by SFPD officers at shortly after 8:30 a.m. on Saturday at Mission and 23rd. She said he told his family he’d been working in the city and had been suffering bouts of homelessness.

Hampton, who said she is from Sacramento, spoke before a crowd of around 50 demonstrators and reporters gathered in front of Mission Police Station at 630 Valencia St. Tuesday evening. The family had only just learned of the shooting and left Sacramento immediately.

Saturday morning police officers approached a man who they suspected of burglary. During the exchange that ensued, the man tried to run, a witness said. Police said the man assaulted a police officer with a glass bottle before he was shot. Both the officer and the victim were transported to the hospital.

Above: Jamaica Hampton’s interview with CityTeam, a nonprofit. The video was published on Oct. 29, 2019 via Youtube.

Hampton arrived unannounced at the gathering on Tuesday, surprising organizers when she came and asked to speak. She said her son was shot at eight times, but only struck three times in the legs. Hampton said that police have refused to let her visit her son, who remains in critical condition.

Dyne Biancardi, the Hamptons’ advocate, lives a few blocks away from where the shooting occurred. Biancardi told reporters she was contacted by Jamaica Hampton’s brother; she said and waited outside of his hospital room for five hours. She said the victim had been shot in the leg and that it was unlikely he would be able to walk the same way again.

Biancardi said Jamaica Hampton had come to the city for a treatment program and had been homeless “for a while.”

She also said there was footage of the events after the shooting, and that police confiscated a drone which had been flying over the crime scene.

Tana Hampton said Jamaica had been working as a homeless advocate and was not a violent person. She said her son had been trying to piece his life back together and embrace sobriety.

“All I know is I want to see my son. He is a good person. He doesn’t even have a [criminal] background. You can check that,” Hampton told reporters.

The press conference began at 6 p.m. in front of Mission Station. As rain fell, Adriana Camarena told the crowd that “We are here to demand the truth of what happened. We’re also here to demand police accountability. It’s high time that we end police impunity in San Francisco.”

Shortly thereafter, however, Hampton arrived. She introduced herself to Camarena who then turned the microphone over to the family.

“All that matters is that my son needs to see his mom,” Hampton told the group.

Per SFPD policy, the police department is required to hold a community town hall meeting within 10 days of a police shooting.

Saturday’s shooting was the first since June 2018. 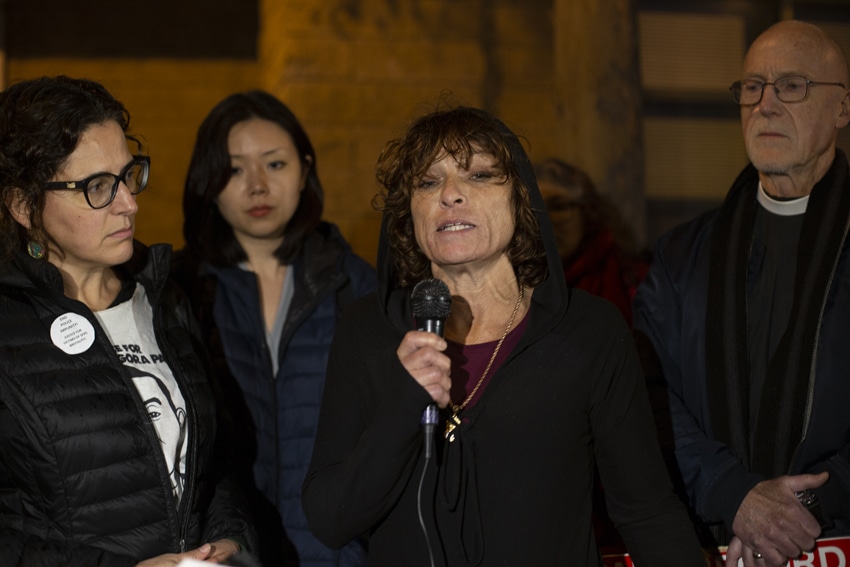 From left to right: Adriana Camarena, Dyne Biancardi, Tana Hampton in center, and Father Richard Smith on the right. Photo by Abraham Rodriguez. 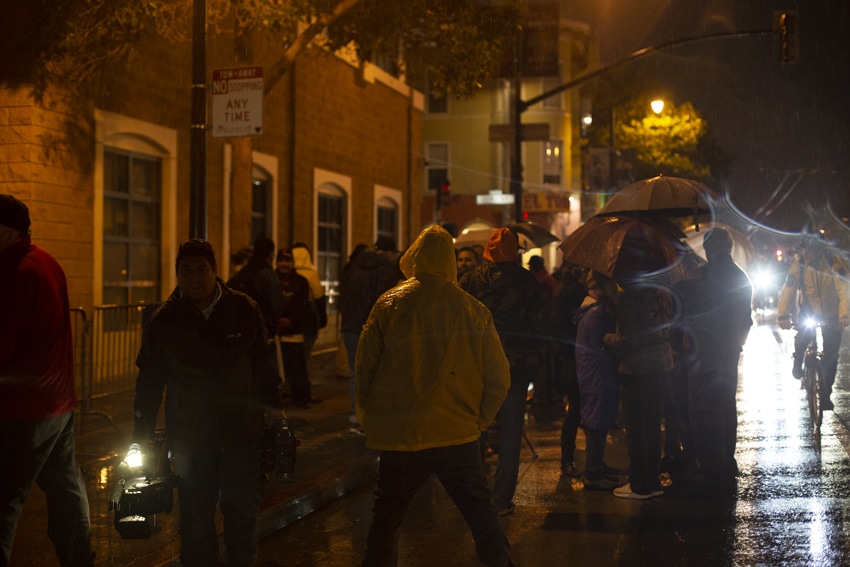 Crowd outside of Mission Station on Tuesday night. Photo by Abraham Rodriguez.Woman who says her son was shot by San Francisco police questions use of lethal force.