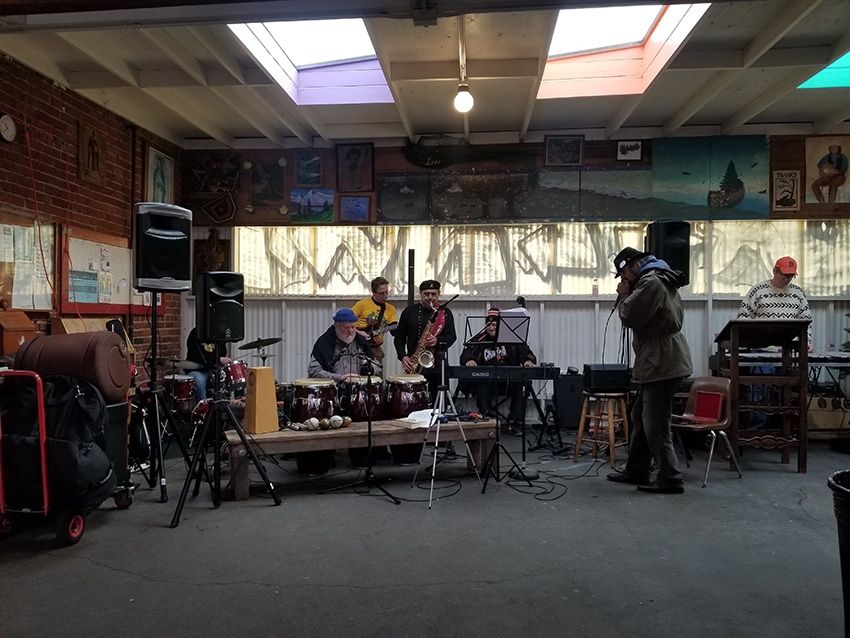 The Bernal Beat, a band from Bernal Heights, plays for dozens of people at Martin de Porres on Christmas Eve. Photo by Abraham Rodriguez.

On a dreary Christmas Eve morning, hundreds of hungry men and women arrived at Martin de Porres’ House of Hospitality at 225 Potrero Ave., between 15th and 16th, for a special brunch time meal. With volunteers running up and down the patio, the soup kitchen looked more like a beer garden — replete with live music.

But Dec. 24 would be the last time in 2019 anyone gets a free meal at this soup kitchen: The next plate of food won’t be served until Jan. 8, 2020. The pending closure drove staff to prepare something different for the diners — scrambled eggs, slices of fruit, sausages and sauteed potatoes.

“This is a special occasion, we usually just do soups,” one staffer said.

Volunteers have been running Martin de Porres since 1971, and every year they close between Christmas and the first week of January, a staff member said.  This a crucial time for the organization to repair facilities, catch up on work, and just take a break. But in the thrall of winter, curtailing a vital source of free meals for the city’s homeless population seems like it could have life-or-death consequences.

But many of the patrons — or clients as the center calls them —  aren’t concerned over the upcoming closure or the loss of food. In fact, very few of the people seemed to be worried at all. The patrons say there are plenty of other options for them in and near the Mission.

Andre Jefferson, a homeless man who has been receiving aid from the center since the early 1990s, said he’s not worried about getting help this time of the year. If he can’t get a meal at Martin de Porres, he’ll go to different places, like Glide Memorial United Methodist Church or the St. Anthony Foundation.

Jefferson’s friend, a man named Alan, was also adamant that there would still be helpful organizations even during the holidays. Other groups are still serving people food for free — too much food, at times.

“They feed us like kings. They feed us too much! I’m too full; they give us seconds and thirds,” Alan said.

Charles Webber was one of the folks getting services from Martin de Porres on Tuesday. He has been homeless off and on and most recently lived in the East Bay before coming back to San Francisco.

Webber said he doesn’t like going to soup kitchens or homeless services in the Tenderloin because people are a bit unpredictable. But he loves coming to Martin de Porres.

“If I can get here, I could use the services here,” Webber said. “I help with a few things like the garden and stuff. I pick up litter; not everyone is neat.”

Webber said he does get mail routed to the soup kitchen. He remembers when, in 2008, he was one of the only homeless folks living in a tent underneath freeways around San Bruno Ave. Now, there are many homeless people there.

Jefferson is sanguine about the upcoming winter, and the time away from this dining room. He points to his shopping cart  — a beat-up looking metal basket heaping with blankets, tarps, and his tent next to bags of recyclables. He has been looking for a job and has a paycheck coming in the first week of January. But until then, he’s collecting cans for cash.

“I can’t do nothing. I’m just going to hole up and wait until I get paid again,” he said.