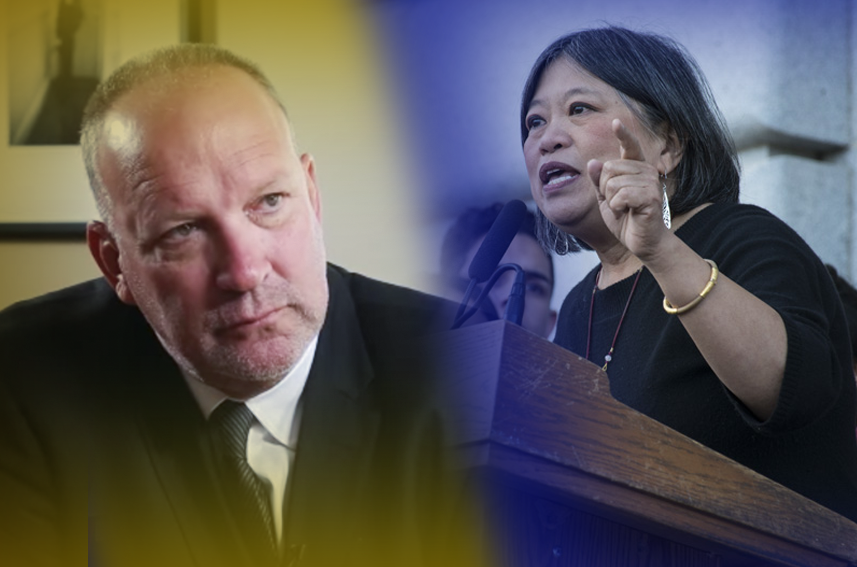 When asked the purpose of his email to Supervisor Sandra Lee Fewer’s retired cop husband John, ex-POA boss Gary Delagnes told Mission Local “You can tell Sandra the next time she opens her mouth, I’m going to release John’s record to the Board of Supervisors.” Photo illustration by Abraham Rodriguez

‘You can tell Sandra the next time she opens her mouth, I’m going to release John’s record to the Board of Supervisors,’ Gary Delagnes tells Mission Local

“ … Here is the deal. We know that Supervisor Fewer is a fighter for the oppressed, opposed to this horrible capitalistic society, and abhors any form of police brutality so I will be releasing John’s disciplinary record (which is quite substantial and entertaining),” reads the letter.

“Perhaps he [John Fewer] should sit down and think about all of the complaints he received, and maybe recall some of his alleged actions, as I did last night, and let’s see how that will play in front of his wife’s colleagues at the Board. His disciplinary record is quite entertaining, I assure you. They are free to call my bluff if they wish.”

Delagnes wrote this email in the summer of 2018 to retired SFPD Commander Rich Corriea, tasking him to send it along to John Fewer. “He could’ve just asked me for John’s email address,” said Corriea. He described Delagnes’ threats as “troubling, even evil.”

While this email was sent on June 28 of 2018, Mission Local only obtained it this month. Corriea, Ribera and Delagnes himself confirmed its contents.

At the time of its writing, Delagnes, the president of the union from 2004 to 2013, was employed as a POA consultant. In February 2019 he was ousted from this post following a Facebook tirade against the deceased former Public Defender Jeff Adachi.

Neither John nor Sandra Fewer called Delagnes’ bluff. Instead, they called the City Attorney’s office, which directed them to the DA’s office, then led by George Gascón. The status of the case is uncertain, but it appears to be dormant. Calls to the DA’s office — now helmed by Suzy Loftus, with Chesa Boudin to be sworn in on Jan. 8 — were not returned.

“I saw it as a threat to harm my family,” says Sandra Lee Fewer. “I should think twice. I should always keep this in the back of my mind whenever I’m voting on or deliberating an issue of concern to the police.”

The personnel records Delagnes threatened to disseminate, Sandra Lee Fewer continued, “are protected under the law. But the way they worded this is, they are above the law. And they can do this.”

Multiple messages left for POA president Tony Montoya were not returned; it is unclear if he knew of Delagnes’ email.*

Delagnes, however, freely acknowledged he sent it. “She was ripping the POA; I don’t remember what she was ripping them about back in those days. I got angry at the time, as I used to do — not anymore, I’m retired,” he said.

When asked what the purpose of this email was, he replied, “You can tell Sandra the next time she opens her mouth, I’m going to release John’s record to the Board of Supervisors.”

But, he continued, “I can’t do that. I ran it by a lawyer. I ran it by [POA counsel] Gregg Adam. It’s a violation of state law. Definitely a misdemeanor. Could be a felony!” In fact, it could be extortion or blackmail.

Both Sandra and John Fewer took it that way: “I saw it as what he was saying is ‘if you don’t get on board with us, we’ll harm your family,’” said Sandra Lee Fewer. Adds John: “The intention was to embarrass Sandy, or harm her. Or, if she was a weak person, to get her to go along with them a little more, see things their way.”

Mission Local shared the contents of the email with several law professors. While it’s clear in the letter that Delagnes is threatening to release negative information to harm his enemies, this alone does not constitute extortion or blackmail. To reach that threshold, he would’ve had to ask for something in return to prevent the release of damaging information — and Delagnes’ letter is ambiguous about this.

“Saying ‘you better worry tonight, because tomorrow you’ll read this in the paper’ — that’s not extortion,” explains John Diamond, a professor at UC Hastings.

“The ironic thing about extortion is: You can threaten to disclose something. And you can ask for things. But you can’t put the two together.”

Delagnes, in his letter, does not make a clear ask. There is, in the end, no law against taking political vengeance.

“Not that I think nothing wrong happened here,” says Scott Altman, a professor at the USC Gould School of Law, “but proving beyond a reasonable doubt that [Delagnes] was seeking to obtain property or an official act seems like it’d be really hard to do based on that vague language.”

And yet the language Delagnes subsequently used in conversation with Mission Local was far less vague than his one-page letter, in which there was no direct causality between demands made of Supervisor Sandra Lee Fewer and the threatened release of John Fewer’s confidential records. What Delagnes told us in December 2019 is remarkably direct and causal: You can tell Sandra the next time she opens her mouth, I’m going to release John’s record to the Board of Supervisors.

Delagnes’ letter “is very far from explicit,” says Altman. “It’s unclear what he wanted.” Based on Delagnes’ conversation with Mission Local, however, it is clearer. And it’s also clear, based on his own words, that he put thought and effort into following through with his threat.

Delagnes says he reconsidered, however. Not only is it illegal to release these confidential records — nor should he even be rummaging through them — but it would be deeply hypocritical for Delagnes to disseminate protected police files.

He acknowledges this: “As president of the POA, I’ve fought the release of police records for a long time. To a certain degree, I had to say ‘I’m doing the same thing I’m fighting,’” Delagnes says. “As much as I do dislike Rich, Sandy, and John, I have a loyalty to cops. I would’ve set a terrible precedent releasing his disciplinary record.”

And yet, if those files just happened to land on Delagnes’ desk, it’s not illegal for him to distribute them — just as it wouldn’t be illegal for a journalist to publish them. Anyone unfamiliar with these rules learned them following Adachi’s sudden death in February, when confidential police files regarding the Public Defender’s last hours were quickly leaked by the SFPD and disseminated via the media.

The expediency of these leaks — and the ongoing lack of accountability — can hardly have been lost on the Fewers.

Delagnes, 65, ascended to the POA’s vice presidency in 1990. Under his leadership, the San Francisco Police Department became one of the nation’s best-compensated police forces, going from the state’s 92nd-best-paid department in 1992 to become one of the richest big-city outfits in all of California.

At the same time, he served as the vocal and very visible face of a union increasingly viewed as a reactionary force — and, to a greater and greater extent, isolated from power and on the political outs. In 2015, he was fined $5,500 for illegal lobbying due to an email he sent then-Supervisor Malia Cohen regarding a proposed non-binding resolution cheering Black Lives Matter efforts: “If you become involved in this legislation you can rest assured that any relation with the POA is over,” reads his note to Cohen. “We went above and beyond for you and this is how you repay us. You had better think long and hard before lending your name to this. I am astounded that you would involve yourself in this absolute bullshit.”

The POA alienated Supervisor — and later, mayor — London Breed; it has, in recent years, grown more and more politically ineffective. Its attempts to bypass the Police Commission and write its own rules regarding Tasers, Proposition H of 2018, was obliterated by a 60-40 margin, despite the police union outspending its foes by a factor of five. In 2019, some $700,000 marshaled by the POA was put into ads labeling DA candidate Chesa Boudin “The No. 1 choice of criminals and gang members.” Boudin won his race, and the POA’s negative ads were credited with galvanizing his supporters.

Delagnes, in his conversation with Mission Local, was clearly incensed to have seen John Fewer holding a sign for “Chelsea Boudin” (Whether intentionally or not, Delagnes repeatedly referred to the DA-elect as “Chelsea”).

It was at Boudin’s election night gathering that Sandra Lee Fewer led a chant of “Fuck the POA.” While many assumed, correctly, this was in reaction to the union’s ham-handed role in the DA’s race, Fewer acknowledged her own situation did loom large.

“I said ‘Fuck the POA,’ I get it. It’s offensive to a lot of people,” Fewer says. “I also think a lot of people don’t understand the relationship between the POA and elected officials — in particular, those they threaten. I meet many unions. I meet many associations. This is the only one that has ever threatened me or mentioned doing harm to my family.”

Fewer said the June 2018 letter has not altered her on-the-job performance, via either fear or retribution.

“Tony Ribera came to ask me for an additional $50,000 for batting cages at Washington High,” she said. “He did this knowing he was cc’d on that email, and he never reached out to me and distanced himself from it. I granted it.”

Delagnes, for his part, did not seem concerned that he broke any laws or would face any consequences. “I don’t think anybody goes to jail in San Francisco,” he said.

“You think Chelsea is going to prosecute me?”

The SFPOA will never sanction, authorize, or participate in the unauthorized and illegal dissemination of any police officer’s personal information and/or personnel records, including discipline case files that may be in the possession of our legal defense fund. Never.

This POA holds all personal and personnel related materials provided to us with the utmost security and privacy.

The recent news report detailing the threats made by former SFPOA President Gary Delagnes to release retired SFPD Sergeant John Fewer’s personnel records as a bargaining chip to be used for some perceived political advantage is appalling and also a violation of our member’s trust.

Make no mistake, we have considerable disagreements with Supervisor Fewer and believe she is unfit for public office. We have forcefully condemned her unhinged election-night rant disparaging SFPOA members and we believe many of her policy actions have contributed to more crime for residents to suffer through and less accountability for criminals in San Francisco. Voters will soon decide her fate.

But to threaten to expose a former police officer’s personnel records is dangerous, wrong, and hypocritical.  The current SFPOA leadership had no knowledge of the threats levied by Mr. Delagnes and we fully denounce his actions.  It’s appalling that a former union president would contemplate sacrificing the personal privacy of one our members in order to satisfy a grossly misguided personal vendetta.

We believe strongly that police officer personnel files should only be released in accordance and compliance with the law. As such, we instructed our legal counsel to send Mr. Delagnes a demand letter instructing him to return to the SFPOA any personnel files, records, and/or attorney-client information that he may have acquired as a result of his previous work for the SFPOA.

Mr. Delagnes no longer serves in any official capacity in our union.