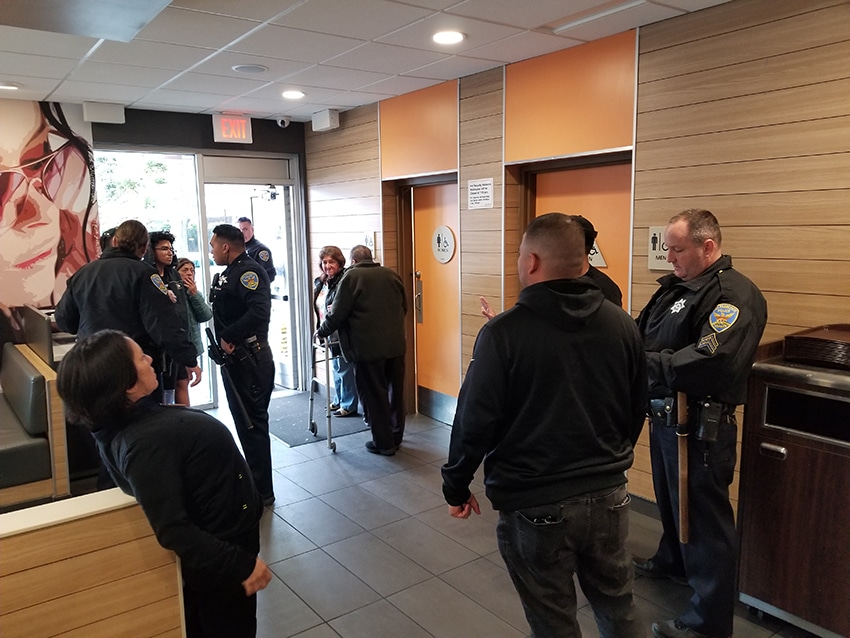 Police inside McDonald’s after a person attempted to rob the counter at gunpoint. Photo by Abraham Rodriguez.

The incident began around 2:21 p.m. when a man allegedly walked into the McDonald’s on 24th and Mission, pulled out a gun and demanded money from the clerk. One witness, who identified himself as Luis, said he was eating at a table near the counter and saw a man with a gun hop over the counter and yell loudly.

Luis said the man yelled some more before leaving through the employee entrance to the kitchen with a disappointed look on his face.

“He had the gun out at the counter when he was arguing [with the staff], I saw him putting it back in as he walked out,” Luis said.

Police said the man attempted to open the cash register “with negative results.”

Another witness was right in the path of the gunman. Alejandra Londoño works as a babysitter and was at the McDonald’s with her employer’s family. She said someone started yelling, but she had her back to the counter and couldn’t see the commotion. A McDonald’s patron next to her made a gun gesture with his hand and tried to warn her of the armed man. She turned around to see the suspect.

She saw him move past her with a gun in his hand as he exited towards Mission Street.

“He walked down the aisle trying to hide the gun, and I couldn’t even talk,” Londoño said.

She thanked one of the officers who took her report, saying they responded very quickly to the call.

John Ruiz was eating with Londoño when he saw the suspect walk out of the employee entrance to the kitchen, head past his booth and go to the exit. Everyone pointed at the gunman — who apparently did not realize the police were already en route.

Ruiz lives in the neighborhood, and he said robberies are unfortunately common this time of the year.

Witnesses say that the armed man tried to escape through the BART station but saw officers arrive and draw out their guns. Officers apprehended the suspect inside the station, and then walked the detained man out of the subway and placed him in a police SUV.

The spectacle grabbed the attention of many on 24th Street and Mission plaza, who crowded around the police officers and their vehicles as they detained the suspect. One older man kept asking a police officer incoherent questions and was later taken into custody by two other officers who told him he’d be held in the drunk tank for several hours. His friends, however, laughed it off.

Police are still investigating the robbery and closed off the McDonald’s as they spoke to witnesses. A manager at the restaurant said they would be closed for the rest of the day.

Police asked Mission Local and others to leave the restaurant, saying it was an active crime scene.

“The suspect was taken into custody and the firearm was seized,” wrote SFPD spokesman Officer Joseph Tomlinson. “There were no injuries during this incident.”