The Mission’s ‘Sunset Idea House’ is now a squatters’ palace

Edwin Thompson is led away by police on Sept. 10 after trespassing at the Mission’s ‘Sunset Idea House’ at 25th and Alabama. This was his seventh police citation for trespassing on this site. Photo by Joe Eskenazi

The van parked on the sidewalk on 25th and Alabama reads “Vacant Property Specialists.” On its side are illustrated examples of its handiwork: “Coded steel doors,” “Steel window protection,” and the pièce de résistance, “A/C fortress.”

This is, apparently, who you call when plywood just won’t cut it. And plywood certainly hasn’t cut it here at 25th and Alabama, where the citadel-like, 4,800-square-foot “green to the gills” modern mansion once featured as a Sunset “Idea House” is now an abandoned hub of police activity, a squatters’ paradise — and that worst-possible San Francisco outcome, vacant luxury housing.

Come to think of it, the 170-pound steel door may not cut it, either.

The technician installing it on Sept. 10 felt it yanked clean out of his hands by the large, agitated homeless man who claims he owns this place, sparking a hostile confrontation. By the time your humble narrator arrives on the scene moments later, the combatants have retreated to their neutral corners.

The so-called owner introduces himself to me as Edwin Thompson III; I recognize his name from numerous police reports stemming from his prior confrontations at this building which he declares to be his own.

One month earlier, when rousted from sleeping across the sidewalk here by San Francisco police, he told the officers that he joined the Marines at age six and was a “six-star admiral.” Regardless, they cited him for blocking the sidewalk.

Thompson does not discuss this with me (Of note, admiral is a naval rank, not a marine one, and the last — and only — six-star admiral was George Dewey, who died 112 years ago). He does, however, reiterate that this house is his, and he has paperwork to prove it: An owner’s manual for an elevator in which he has signed his name in ball-point pen.

This house, he says, has been his for the past 19 years, which would mean he obtained it at age 19. “I rented it out to reality TV. I got paid pretty nicely. I think.”

“I was in a coma for three years. I was a paraplegic for two. I was shot in the head.”

He adds that he skipped his latest court appearance. “I have a stay-away order from where the courthouse is,” he says (he does not). “I got it for getting high in public.”

(Of note, the house, originally constructed in the early 20th century, was purchased in 1998 by Robin Wilson and her then-partner, SFPD officer Kelly Paul. They remade the modest two-story structure into its ostentatious present form. Court records reveal Wilson declared bankruptcy five times between 2008 and 2017, rampantly violated this city’s short-term rental laws, and ultimately lost the home in a foreclosure action. Its current owner is a Los Angeles-based LLC run by “a seven-foot tall Russian guy” with a passing resemblance to Tony Soprano, per Realtor Rachel Swann.)

When the police show up, they remain calm and low-decibel. Thompson does not.

“Edwin,” intones Officer Francis Cooke, who’s been called to this property before, “you have to stop.” Thompson, who resents being made to sit on the pavement or having his pockets emptied, grows increasingly agitated. “You’re not even reviewing my paperwork!” he shouts. “I’m not trespassing. They’re trespassing! This is bullshit!” he bellows, gesticulating wildly at the Vacant Property Specialists technician and Swann, the Realtor trying her damndest to sell this house.

The cops — and, by now there are half a dozen of them — are not swayed by Thompson. They never are. The tall black man with a rugby player’s build is placed in the back seat of a police cruiser. His bike, impressively, fits in the trunk of another. And then he’s gone.

The Mission’s Sunset Idea House is not a typical place. There are not so many 4,800-square-foot homes with solar panels and 50-foot turbines in the backyard — where, nevertheless, the owner was caught ripping off the neighbors’ electricity.

So, that’s atypical. But, despite the theatricality, this has become a typical San Francisco story. It’s about land use, homelessness and mental illness.

“This cuts to the heart of the crisis we’re experiencing at lots of levels,” says Dr. Richard Patel, an emergency room psychiatrist at San Francisco General Hospital for the past 25 years. “There has been a 30-percent increase in homelessness in California in just the last two years.”

As a veteran San Francisco Realtor, Rachel Swann has some stories to tell. There was the time she hosted an open house elsewhere in the Mission and a man removed his clothes and took a shower. But nothing has come close to the ordeal she’s faced here.

In June, she led your humble narrator on a tour through the hulking, modern building, spacious and sparse, the residential equivalent of an Apple store. “You’ve got some really great bones here,” Swann said at the time. “It’s a great opportunity for someone to take something and make it their own.”

It’s odd to play up the “great bones” of a building that was, essentially, rebuilt from the ground up only a dozen-odd years ago and was, even recently, a magazine subject and eco-tourism destination. But this is an odd place. It’s also a wreck: Unknown vandals in early 2019 ascended the walls and punched holes in the roof line just prior to torrential rains, resulting in hundreds of thousands of dollars’ worth of water damage. At the same time, the unknown saboteur or saboteurs tossed bags of rocks down the plumbing lines.

Topping things off, a photogenic squatter Swann dubbed “Homeless Johnny Depp” had busted into the property on multiple occasions; on June 9 the police discovered him lounging, barefoot, in a deck chair and marched him out onto the street.

Since then, things have gone downhill fast.

“Major squatter activity where they are kicking down doors,” reads a Department of Building Inspection report from August. “Water pipes were broken … and the squatters were pirating electricity.”

The police are as tired of coming here as Swann is of calling them. When they whisked Thompson off in front of me on Sept. 10, it was the seventh time they’d done so. He tells me that multiple fellow squatters have been living here — “with my permission.” Thompson has, on multiple occasions, invaded walkthroughs with potential buyers; it’s a bad look, Swann says, when you’re touring a multi-million dollar property and a belligerent 240-pound man runs in and tells you to get the fuck out of his house.

People tend to do just that.

Homeless Johnny Depp, meanwhile, has upped the ante. On Sept. 13, Swann says, he dropped by her office. He told Swann that his cousin at Wells Fargo would get him a loan and he’d buy the house where he’s been squatting. He left a phone number; we called it and nobody picked up.

Swann couldn’t help but notice that the man talking to her was wearing tube socks and flip-flops with blood oozing out of his toes. He was covered with sand but was wearing a snappy suit jacket.

Thompson is big and loud and physically imposing. Homeless Johnny Depp is short and slight. He doesn’t yell. But Swann described him as possessing “a Manson-like quality.” That unnerved her far more than anything Thompson has done.

As did what came next: There are “powers” within this home, she says her unwelcome office visitor told her. And so are his clothes, including a green blazer of the sort you receive when you win the Master’s.

He wants it back. 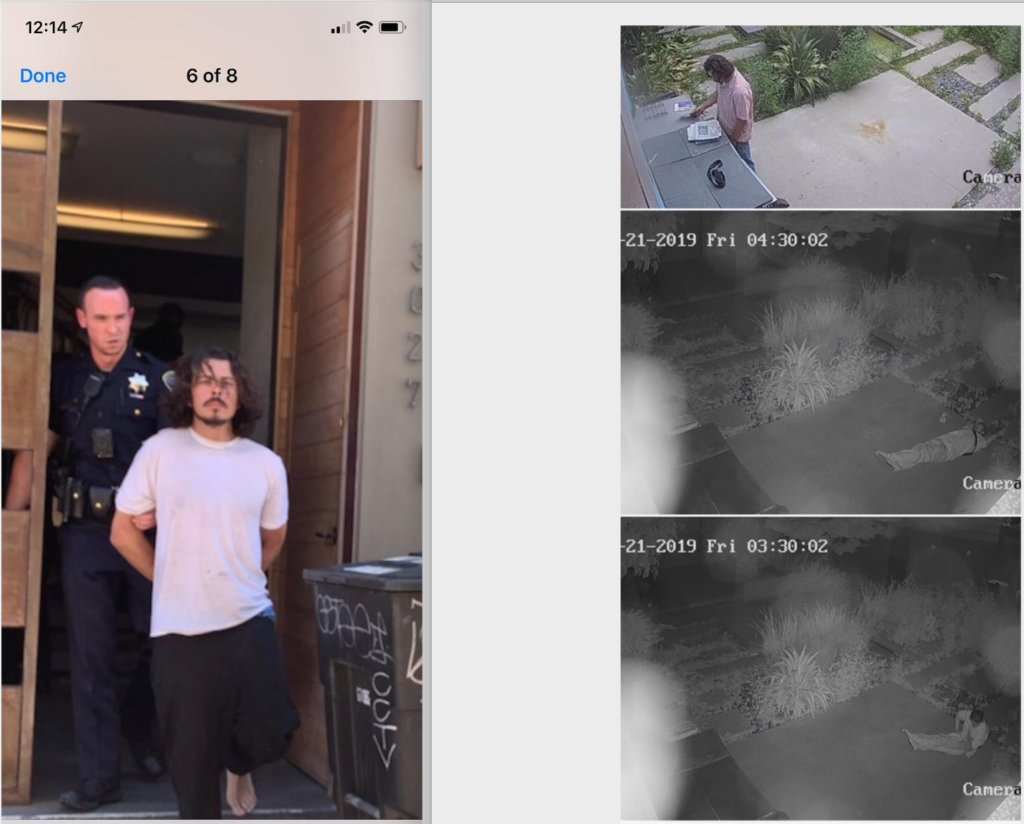 On June 9, this notably photogenic intruder was removed from the property. Security footage from June 21 shows a remarkably similar looking man in the backyard. Neighbors have claimed a man matching this description has been in, on, or around the property at various times. Realtor Rachel Swann says he dropped by her office on Sept. 13.

When the cops rolled off with Thompson for the seventh time on Sept. 10, Swann asked them an intuitive question. Why does this keep happening? The answer she received is, sadly, also an intuitive one if you know the SFPD-DA relationship: It’s because the DA is dropping the ball.

But in this case, that’s not really true. It might surprise people living in tech-savvy, lightning-paced, overstimulated San Francisco, but charges still take weeks to filter up to the DA’s office. In fact, the District Attorney has charged Thompson with six counts of trespassing (and, when the Sept. 10 incident makes its way to the DA, likely a seventh). But Thompson was on the premises at 25th and Alabama so many times, and in such quick succession, that five of these citations landed on the DA’s desk at once.

And while Thompson doesn’t own this house, isn’t a six-star admiral and doesn’t have a stay-away order from the courthouse, he was telling the truth about skipping his court date. At nearly the exact moment the cops were bemoaning that the do-nothing DA was responsible for Thompson being out on the street, a bench warrant for his arrest was being issued. That would have enabled them to arrest him and hold him indefinitely.

But they missed that.

And that’s not really their fault. Those warrants don’t hit cops’ inboxes with text message speed, and it appears they simply cited and released Thompson, yet again. As of press time, he wasn’t in custody.

But one needn’t be Einstein to guess where he’ll likely show up in short order. When he next comes into contact with the SFPD, he’ll be arrested and held on a $7,500 bond.

So, that’ll solve the problem, albeit in a crude and reductive way. But not for Thompson. He’ll still be coping with whatever demons induce this behavior.

We have the people in place to deal with situations like this, says Dr. Patel. We have the systems in place, too. But we don’t use them. “If we followed the letter of the law to what we’re supposed to do, it wouldn’t be too hard to take care of these things,” says the doctor.

A mentally ill serial squatter ought to be receiving treatment, perhaps at the Psychiatric Emergency Services where Patel works: “The answers are easy. Implementing them is not.”

“If this guy was squatting in Atherton or Petaluma, they wouldn’t stand for it,” Patel continues.  “He’d be jailed. He’d be in treatment. Because there aren’t 100 other people like this on any given day. But who do the police get here: the guy who’s squatting or the guy running through traffic hitting cars with tire irons? So, it’s kind of the Wild West. The police are overwhelmed. Because of that, folks are getting away with a lot more than they used to, even five years ago.”

Swann watched the cops roll off with Thompson on Sept. 10. He would return shortly thereafter, she says, and craft himself some manner of makeshift structure with a bedsheet. She worries that nothing will be done about him until someone is grievously hurt — and, then, the powers-that-be will look at his litany of charges and point fingers about who’s to blame.

“This man needs help,” Swann told me. “He needs mental health help. Until then he’ll be a danger not only to this property but to the general public.” And himself.

She opens the door to her car and sighs. The house is still for sale. “And if someone has an interest,” she says, putting the key in the ignition, “I always encourage them to make an offer.”

From the exterior, this dream house is still quite dreamy. Photo by Abraham Rodriguez.