Improbable Democratic presidential aspirant Marianne Wilson gave the crowd what it wanted during a sweltering night at Manny’s on August 15. Photo by Julian Mark.

On Thursday night Manny Yekutiel walked on stage at his political cafe, Manny’s, held up a mic, and faced a crowd of 350 strong.

“Who are we here for?” Yekutiel asked them.

“Marianne!” the crowd yelled back.

“Yes!” the crowd shouted back.

It was, indeed, upwards of 90 degrees in the room, and when improbable Democratic presidential candidate Marianne Williamson walked in, the frenetic crowd seemed to make the room just bit hotter as it hooted and cheered.

Truth be told, Williamson — a 67-year-old self-help guru and decidedly the Democrats’ “new age” candidate — is not so hot, polling-wise at least. Running at 2 percent in the friendliest of polls, she has a snowball’s chance in overheated San Francisco of winning the Democratic nomination. And this is for a fairly good reason: Williamson made a name for herself writing seven New York Times best-sellers on self-help, has referred to herself as Oprah’s spiritual adviser, officiated Elizabeth Taylor’s seventh marriage (at Michael Jackson’s Neverland Ranch), and has, on occasion, advocated not vaccinating children.

Her only political experience has come in the form of a failed 2014 33rd District Congressional (Los Angeles-area) bid — she missed the podium with a fourth-place finish and 13 percent of the vote — and a book titled Healing the Soul of America: Reclaiming Our Voices as American Citizens. It did not make the best-seller list.

In short, she’s an anti-politician like Donald Trump, but with far more kum-ba-ya — and absolutely no Ku-Klux-Klan.

And maybe that’s not so terrible? Williamson’s general message Thursday night was that morality trumps all and should the sole guiding force of public policy.

“Some people would say I’m naive,” she told a crowd of onlookers fanning themselves with Williamson fliers. “The idea that I believe love, rather than market forces disconnected from all moral considerations, should be the operating principle of human civilization.”

Williamson spoke a lot about children — specifically, childhood trauma. “We have millions of children going to school every day asking the teacher if maybe the teacher has something for them to eat,” she said.

The mise-en-scène. Photo by Julian Mark.

If we want the “power” that will fuel American abundance — because “it’s not power in the ground like oil; it’s not in the sun, either; it’s not in the wind, either” (rather, it’s in the minds of children) — she said the country should take better care of children.

To that end, she said, as president, she’d set up a Department of Children and Youth — a “holistic coordination” that not only focuses on education, but also “early childhood understanding of the brain and psychology and so forth.”

There was also Williamson’s proposal for slavery reparations. “Race-based policies alone leave open the question who’s fault this is,” she said. “Whereas reparations, inherently, there is a mea culpa.”

After giving her audience a 10-minute abridged history of slavery, she said she had submitted a proposal for reparations, but did not go into specifics.

And then there were the Williamson moments everyone came to see. During a discussion on the nation’s massive defense budget, Williamson compared national security to the human body: “You can’t just take medicine — you have to cultivate your health. And with war and peace the same is true.”

“Even Donald Rumsfeld said, ‘We must wage peace.’”

She then proposed a U.S. Department of Peace.

Following the speech, a KTVU reporter asked Williamson outside on 16th and Valencia whether the candidate plans to go the distance. “If you were me, and you just had the experience we just had, would you drop out?” Williamson replied.

After a pause: “I’m feeling heard.”

You know, that’s actually a scary thought, all things considered.

But such are these times.

Asked if, by some miracle, Williamson shot up in the polls, vanquished a chorus of political pundits, and worked her way from being a fringe candidate to actually sitting in the driver’s seat of the most powerful country on the planet — very much like Trump in 2016 — 31-year-old onlooker Elie Schoppik said, unequivocally: He’ll take it.

“Over Trump?” he said to this reporter. “I’d support that recorder in your hand over Trump.” 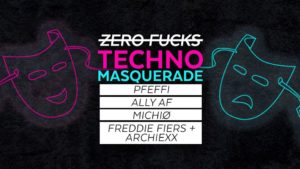 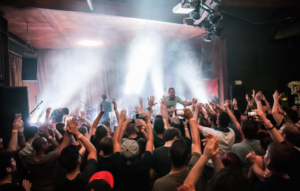 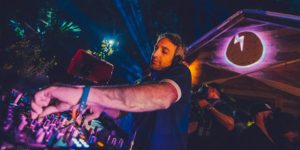