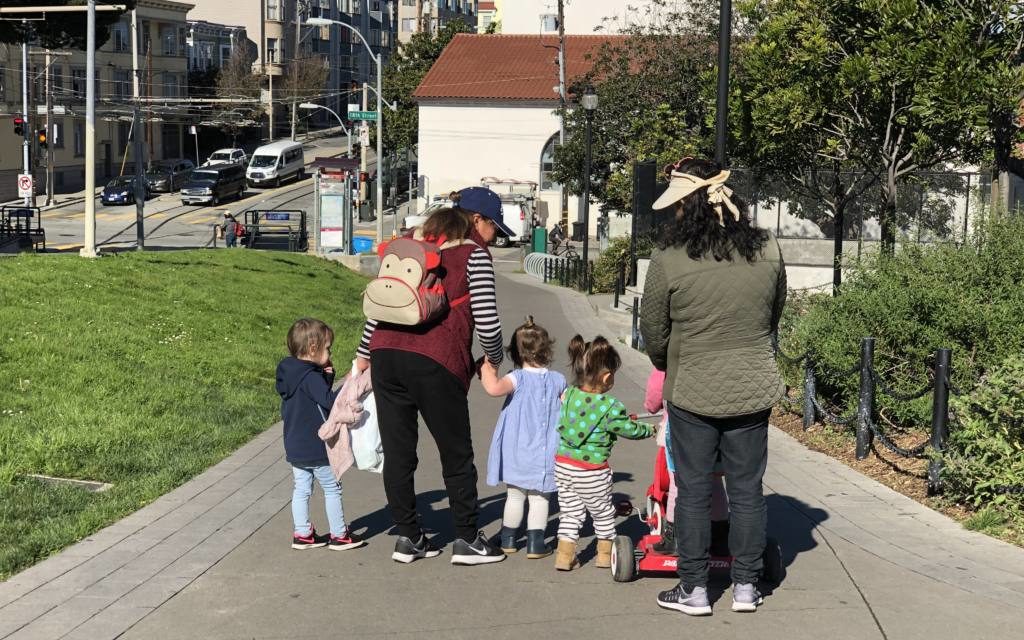 Latin American nannies leave Dolores Park with their own youth gang on January 24, 2018.

Acclaimed by the critics and nominated for a few Oscars — including Best Movie — Roma has resonated amongst sybarites and the general public alike. Its portrait of an indigenous maid and her relationship with her host family in 1970s Mexico City has also touched a nerve among Mission nannies. They’re rarely the protagonists on the big screen, and they related to Yalitza Aparicio’s Cleo — sometimes more than they expected.

“It was super real, I could totally empathize with her,” said 33-year-old Ana Martínez, from El Salvador, as she played with her toddler at Mission Playground.

“Cleo was not a foreigner, but she was kind of a foreigner in that house, because of the abysmal social differences,” Martinez added. “Sometimes she was family, but things happened and, poof, she was back to being the service.”

For 24-year-old Yedid Gallo, whose mother and grandmother also worked as nannies in Guanajuato, the affability of the host family struck her as very uncommon.

“My grandma worked at a house and the lady she worked for didn’t tell her ‘come, sit down with me,’ but told her she had to sit on the floor,” she said. 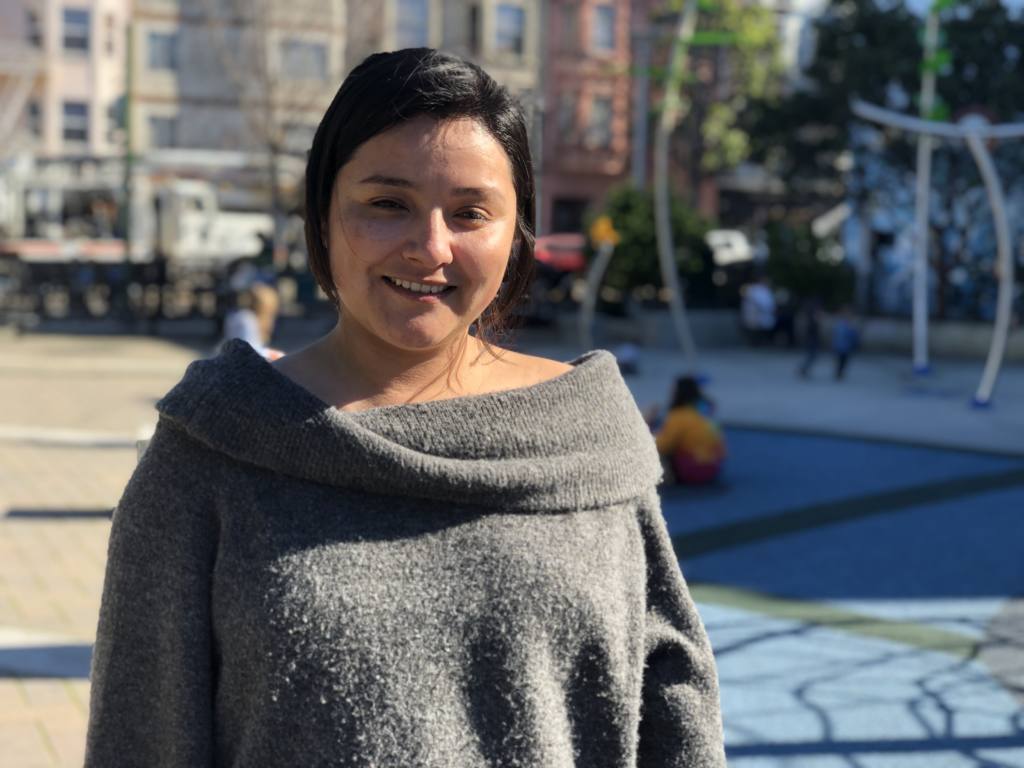 A business graduate from CCSF, Yedid Gallo has picked up an interest in labor law, and is saving up to go back to school.

The job specialization also precludes some of the extreme familiarity depicted in Cuarón’s film. While Cleo and Adela work full-time and sleep at their host family’s house, city nannies are hired specifically to take care of the kids.

“Here, everything has its name: if you’re going to clean the house, then you’re a housekeeper, and you do that job. She who is doing all that housework is a maid,” said Juana Soriano, a Salvadoran nanny with 20 years of experience.

“But yes, the job is similar to the movie in that aspect, because you get attached to the people you work with, and I imagine that goes both ways,” she added.

On many occasions, the work conditions will depend on the family’s disposition, and the nanny’s ability to hold her own.

Ana Tapia, a Chilean mom who once worked as a nanny in the city, conceded that Latino nannies sometimes seemed industrious beyond the job description — and for good reason.

“Latin American people do more than they are told to, they would wash some dishes if they find them laying there,” she recalled. “It is cultural, like, how much would it cost you to do it?”

They are already spending 50 hours a week with their children, and such diligence can be an open door for more trespassing. 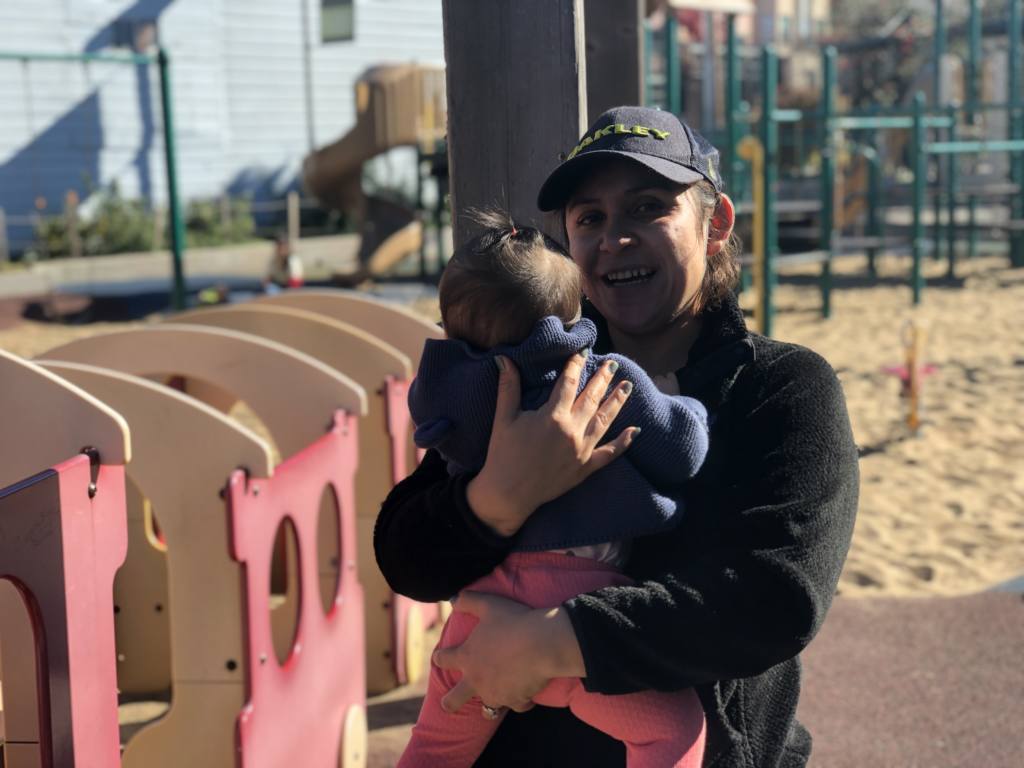 For Soriano, who takes care of two sisters, it is only natural to get attached to the youngest. “It is just human to defend the tiny one.”

“There are families that will take advantage of you because of the language barrier, your education, and them knowing that you won’t fight them because you need the job,” said Gallo.

Cleo and her boss in Roma, Doña Sofia, had their own bond, splashed by the latter’s moments of rage at the dissolution of her marriage. Such outbursts would not fly in a U.S. household.

“Some people look at their nannies like they are garbage, and I don’t understand,” Martinez said. “If they look at you like this, then why would they give you their kids?”

Martinez, who has gone through gnarly experiences during her three years in San Francisco, is not afraid of leaving.

“This is a city where there is so much work, so many families needing help, that one doesn’t need to tolerate such things,” she added.

The bond with their kids, though? Just as strong as Cleo and Paco’s.

“He calls me Mama Yaya, because at his age perhaps he doesn’t see the difference,” said Gallo about the two-year-old charge.

Gallo had taken care of kids before, but she’s been with the current two toddlers since they were four months old. “I feel like they are mine, too.” 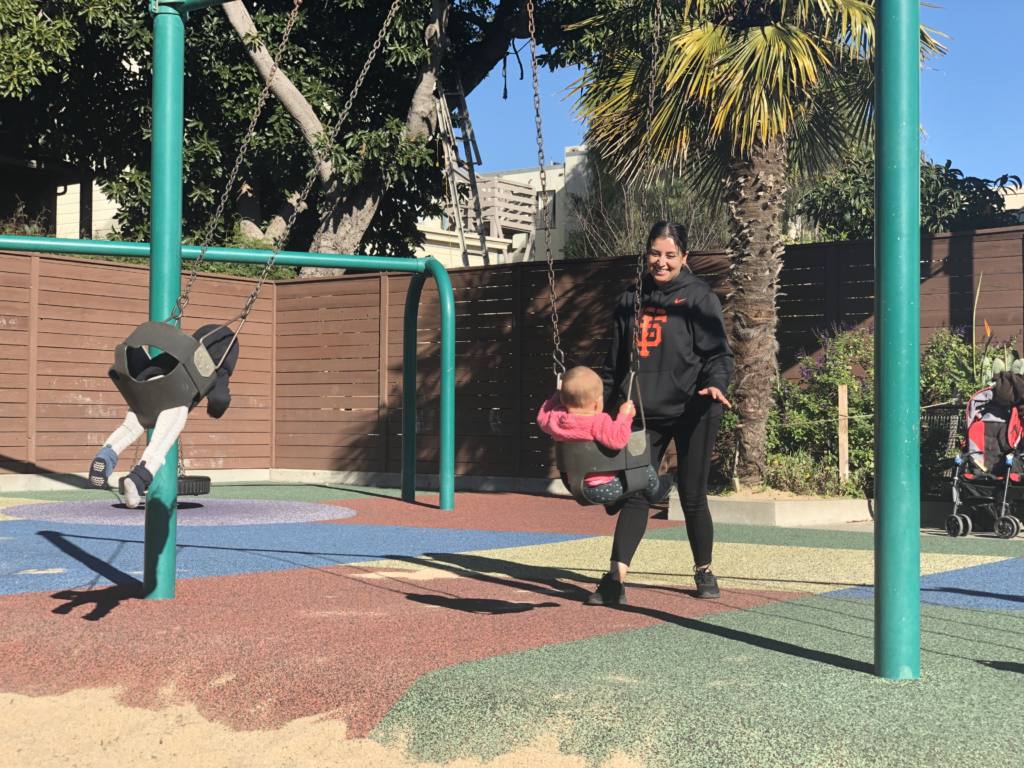 Laura Leon is enjoying time with her twins before they turn a year old in February. They will go to a day care from then on.

According to Martínez, having a child that feels like one’s own has an extra edge. “If they fall when they are with their moms it’s like, ‘ok, he fell.’ But if it happened while hanging with the nanny, it’s her not doing her job well.”

Working as a nanny acquires a different dimension when one is already a mother. Such was the experience of Laura Leon, a 39-year-old Mexican nanny who was working as a waitress as her two older children were growing up.

“I am experiencing with them things I didn’t get to live with my kids, back when someone else had to take care of them,” she explained, as she swung her twin toddlers at the playground. “I’m spending with them the time I wasn’t with my children.”

Children moving on from their care to preschool is its own type of empty-nest experience, and just as heartbreaking.

“Believe it or not, it is harder for the nanny than for the kid,” Soriano said. “Kids move on, and they’re just at a stage when everything is new for them, but a good relationship with the family and some communication ends up making up for it.”

Good-byes are also painful for Leon, but she has learned to live with change. “Time teaches you that life just goes on,” she added.