Kamala Harris’ actual record never seemed to matter before. Will it now? 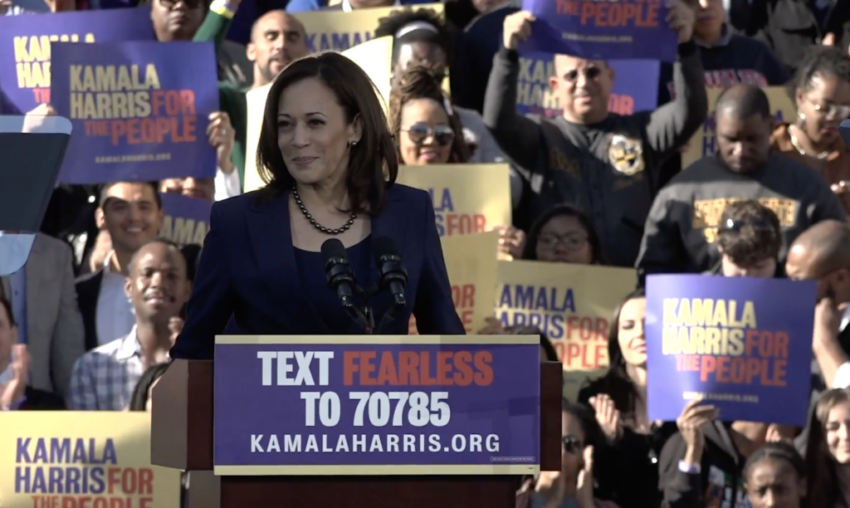 Even if Sen. Kamala Harris wins the California primary — and she better, for her sake — there are plenty of delegates to be had for the other candidates. Photo by Miki Katoni.

Sitting across the table of a Mission Street cafe, I asked a longtime former associate of Kamala Harris what lines of attack her enemies might take. This was a non-starter. “Oh no,” was the reply. “I’m not gonna antagonize her. That woman’s gonna be president.”

You could say this statement (and the resulting article) were prescient. But, frankly, it really wasn’t so much a prediction of the future as an acknowledgement of the past.

“Kamala has clearly and strategically and relentlessly been running for office for a long, long time,” another former political colleague told me four years ago. “And she wants what they all want — the next thing.”

The next thing was always on the horizon. The only surprise is that it may come so soon.

With Senator Harris’ entry into the increasingly crowded field of Democratic presidential aspirants for 2020, a number of national publications have published stories detailing her up-and-down tenure here as San Francisco District Attorney and California’s Attorney General.

The details they uncovered often didn’t reflect well on our erstwhile DA and AG (See: Her former romantic interest Willie Brown placing her on $95K-a-year commissions and buoying her career; rampant ineptitude and dysfunction and cover-ups of all the above at the DNA and Crime Labs; the San Francisco DA’s office inexplicably applying for — and receiving — millions of federal dollars earmarked for border counties it was forced to pay back; this city citing the parents of truant children … and much, much more).

And yet we — San Franciscans and Californians — have elected Harris to higher and higher office. And that’s because one of the many abilities Harris possesses is to appeal to voters in a manner that transcends — and even belies — her actual record.

This ability applies not only to voters who’ve never met her but allies who have worked alongside her for years.

“I love her as a person, because I have seen her sit up at her desk late at night and worry about powerless people in jail,” says one. And yet: “Her policy is not as strong as my love of her.”

On the flip side, there are plenty of political movers and shakers in this city with very little love for Harris who are more than happy to point out the shortcomings of her policy — before casually noting, “I could still support her.”

So, the net result is the same. The pitfalls of Harris’ actual record have not yet detracted from her appeal. Or her viability. 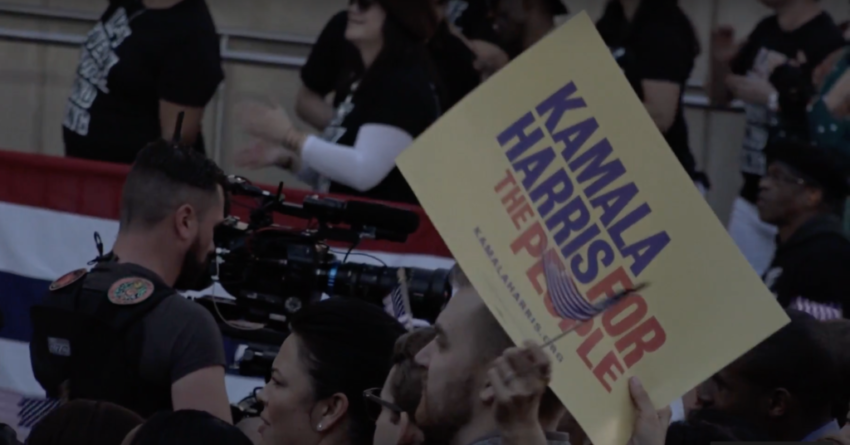 Image from a film by Miki Katoni.

Polls taken on the eve of Harris’ 2016 rout of Loretta Sanchez for a senate seat listed three main takeaways for voters: Harris instilled them with a “very vague, broad positive feeling”; she did a “decent-to-good job” as AG; and she is a Democrat.

“Has her record ever mattered?” ponders a longtime city political player with presidential campaign experience. “Democrats have always had a resume fallacy. They like people with these jam-packed resumes. And our resume candidates get into races against GOP candidates who are good on-message.”

This does not appear to have been lost on Harris. In Oakland yesterday, during her hometown kickoff rally, she was loose and upbeat. She was far more ebullient and high-energy than San Franciscans might have recalled her being 15 years ago when she won her first DA’s race. It was a boisterous speech well-tailored to today’s Democratic audiences (if you took a shot every time Harris said “fight,” you’re probably only waking up just now).

She was good on-message.

Harris’ demeanor and talking points (“We can do better!”) mirrored those a longtime city politico observed her make back in October during a campaign event in Reno for Nevada Senate candidate Jacky Rosen (Rosen won that race, as did so many of the candidates Harris criss-crossed the nation to support in 2018 — a wise and beneficial use of Harris’ political capital). Harris’ Reno appearance was described as “a lot more spontaneous than what we would recall here in San Francisco — and a lot more of a leftist message.”

It was, per the observer, “totally obvious she was running for president.” He likened her October Nevada appearance before 100 or 200 party stalwarts to a comedian trying out new material in smaller clubs with an eye on a showcase performance.

Yesterday’s Oakland crowd was estimated at 20,000, and Harris’ speech was broadcast live on several networks and pored over on the Internet afterward. 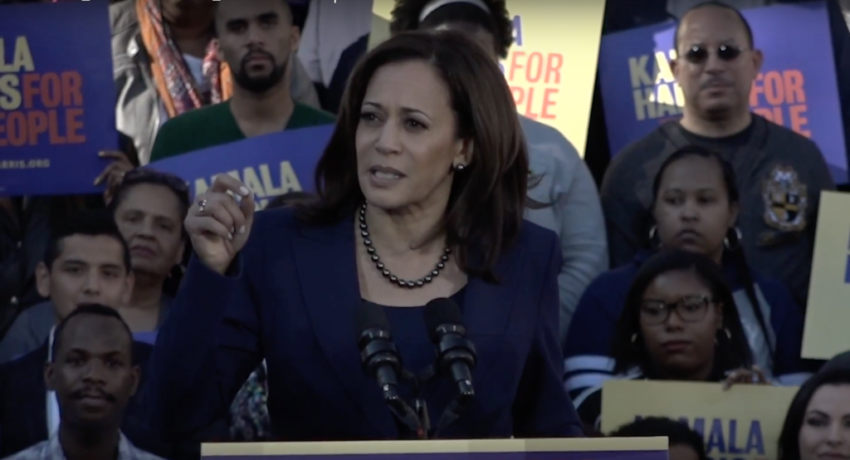 Image from a film by Miki Katoni.

One hangup for Harris is that her old material doesn’t play as well as it used to.

To wit, the New York Times on Jan. 17 ran an op-ed by University of San Francisco law professor Lara Bazelon belying Harris’ claim that she was a so-called “progressive prosecutor.”

The op-ed was damning. But it only reinforced much of what remedial readers of local or state news would already have known. Harris’ record on drug cases, cash bail, legal marijuana, Proposition 47, police use-of-force, and other “progressive” issues has not been stellar (in some cases, it hasn’t even been extant). Harris was furthermore elected AG on the promise of criminal justice reform, but it’s hard to argue she greatly altered the state’s status quo.

And yet, it remains to be seen if this will weigh her down in a presidential contest when it failed to do so before and never has. Will a “very vague, broad positive feeling” be enough, yet again?

“Does anyone think the No. 1 issue in America right now is how progressive Kamala Harris was 15 years ago?” asks one San Francisco political strategist. “Will it matter to progressives in a caucus in Iowa? I don’t think it’ll be about fact-checking. It’ll be about organizing campaigns.”

Organizing campaigns is something Harris’ record is less ambiguous about. She’s solid here.

California’s junior senator has, to this point, been blessed with flawed opponents who have often made strategically indefensible decisions. But she is a fierce competitor who will not be outworked. She is a voracious fund-raiser with the drive to make the asks that other candidates shy away from. She has cultivated tech barons; her picture is hanging in Caribbean restaurants in the D.C. suburbs; she counts the Obamas as personal friends. She has, in the words of one begrudging critic/admirer, “enough connections to wire all of Washington.”

Additionally, competitors attempting to outflank her on the left are faced with the task of explaining to voters that, in the age of Trump, the female candidate of color isn’t progressive enough. “We had a little lab experiment on that in San Francisco,” notes one observer dryly. “It didn’t work out so well.”

With her anodyne, ever-malleable messaging and access to greater and greater sources of fund-raising wealth, Kamala Harris is a stellar modern political candidate (access to wealth is, in fact, the overwhelming requirement for political success. Whether Harris’ fund-raising abilities can withstand a few lackluster primary results may remain to be seen).

Separate and apart from all that, Harris may yet serve as a national Rorschach test.

Voters will look at her record and see what they want to see: They may applaud her decision as DA to not charge a cop-killer with the death penalty, be dispirited by her subsequent quest as AG to enforce the death penalty — or be confused and angered by a future lurid campaign ad featuring either of the above (or undocumented immigrants gunning down San Franciscans, which has proven effective in the past).

But voters may also look at Kamala Harris — the person — and see what they want to see. They will look at a smart, strong biracial woman and she will serve as a mirror for the nation. She will reflect back Americans’ negative biases about women and minorities. Or she will reflect back positive aspirations for a more inclusive nation. People will, in short, see their own political visions.

Whether Americans, writ large, like what they see won’t just determine Harris’ future. It may well determine the country’s. 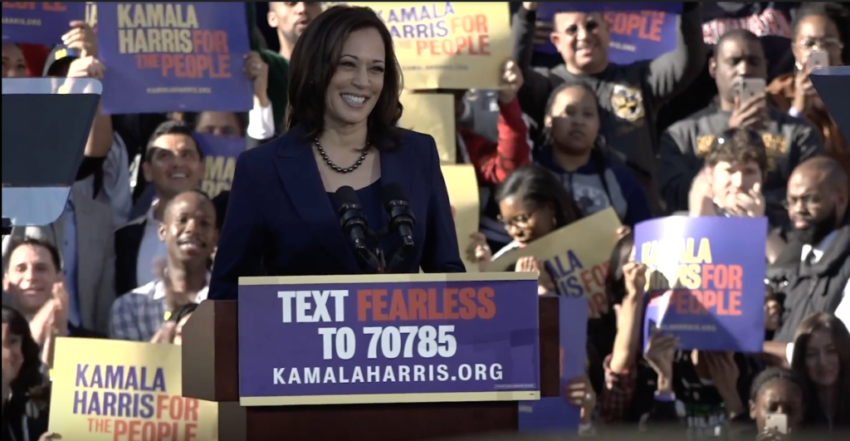 To be continued. Image from a film by Miki Katoni.